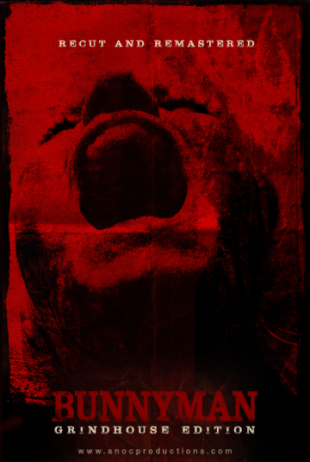 Hollywood Ca. – Director Carl Lindbergh is set to re-release the original Bunnyman film. Originally released in 2011, ANOC productions is unleashing the ultimate version of the film via Amazon on April 19th 2019. The “NEW” Director’s Cut is titled Bunnyman : Grindhouse Edition and will feature never-before-seen footage! The film has also been re-edited, to show Lindbergh’s truest vision of the film. The film’s release it timed specifically for Easter !

This is director Carl Lindbergh’s true vision of the film. He says of this remake/directors cut: “What initially started as a simple idea of doing a director’s cut of the film, evolved into a full remake of the film. The original Bunnyman was completely recut with approx. 50% of the film being new footage (incorporating deleted scenes, new VFX etc.), and the score was completely redone. These changes go way beyond a simple directors cut, however it’s not an entirely new film either. When revisiting the film, we realized there was much more we could fix then initially anticipated. These changes make Bunnyman : Grindhouse Edition the definitive version of the original Bunnyman film. The film was remade in the spirit of Grindhouse/Exploitation films of the 1970’s.”