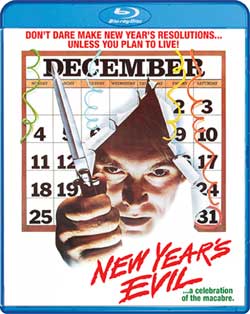 Let’s go spend this New Years Eve in the city of Los Angeles. There is a great party being planned with two live bands and the radio personality Blaze, the first woman of rock n roll hosting. If the bands music isn’t to your liking you can always call in just like that psychopath who calls himself Evil. Evil has a special New Years resolution this year though, he plans to kill one person at midnight in every time zone in America. Blaze not only gets to hear his obscene phone calls that sometimes play the death of Evil’s victims, she is promised to be his last victim when midnight strikes in Los Angeles.

“This New Year’s, you’re invited to a killer party…!”

Let’s take a trip back to the glory days of the slasher film shall we. When the slasher first began to take over movie screens every holiday was hit when the studios ran out of holidays they started setting their body count films during birthdays and graduations. It only makes sense then that in 1980 the slasher film that deals with everyone’s favorite excuse to get drunk, New Years Eve was finally added into the collection. 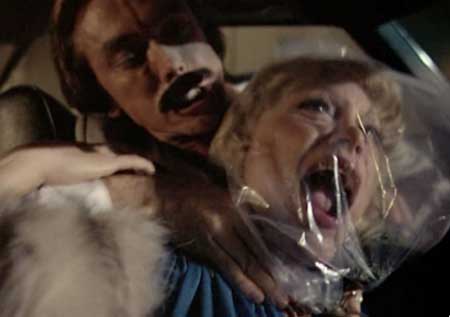 New Years Evil attempts to take the punk rock route with its atmosphere. I have to say however that the groups of so called punk rockers that are revealed on screen are hardly the stereotypes one would expect to see, and they are incredibly calm in most of the scenes where they are shown. In the city of Los Angeles however the biggest New Years Eve party is being held by the local radio station with their air talent Blaze leading the show. Blaze is shown getting ready for the show and like most women in the 80’s new wave scene she is shown wearing way too much pink blush, this makes me wonder did these people ever really look in the mirror while they were getting ready to hit the town. Blaze is on the phone with her assistant making sure that she is on her way, but it is only a matter of minutes before we see her assistant attempt to get into the shower only to be attacked by a black gloved killer with a knife. 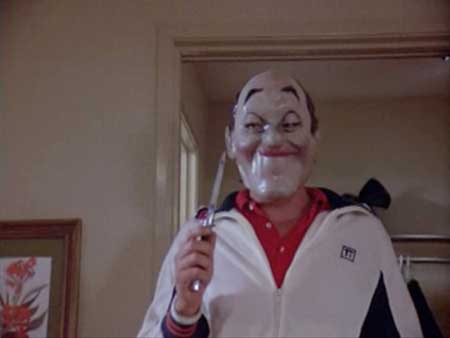 After we witness this random act of violence we are treated to one of the many songs on the New Years Evil soundtrack. There are two bands in the film and they do all of the music, they really aren’t that great so just settle in and take it. At least the viewer gets to watch some pretty standard footage of punk rock kids riding in a comfortable on their way to the show. 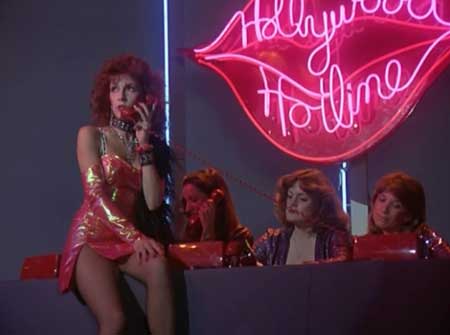 When the viewer finally does get to see Blaze again her son Derek is introduced. Derek is your typical 80’s pretty boy, you know the type. Mommy apparently doesn’t pay too much attention to Derek, and apparently his father is a drunk/heavy drug user. From his parents it doesn’t take a professional psychiatrist to be able to see that Derek is a pretty messed up kid. He spends most of the film upstairs away from the party locked in a room. His activities aren’t just limited to cutting off the heads of flowers and wearing his mother’s nylons on his head in general he just spends the entire movie acting like a weirdo.

It’s only after a few minutes that the main plot device of New Years Evil takes place. During a segment of the show Blaze begins to take callers to vote on their favorite new wave song of the year. During her second call Blaze begins to get a little freaked out. There really isn’t any wonder as to why she’s so scared, the voice coming from the other end of the phone is heavily distorted. The voice tells Blaze that its name is Evil (but it says it like EEEE-VIL and it does offer a great laugh and a possible drinking game) and he plans on killing someone every time midnight hits. 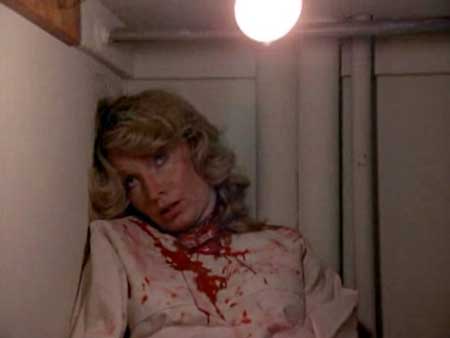 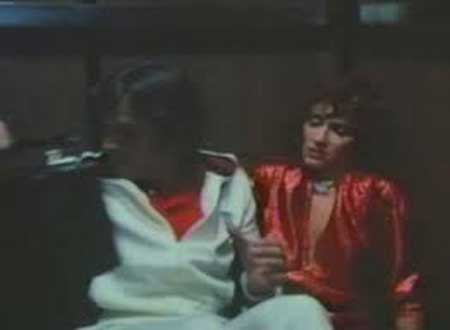 The phone call is enough to make weirdo Derek even freak out. After Blaze and Derek talk on the phone (I mean come on mother of the year he is just upstairs!) Blaze demands to get more security at the party. When the security does show up at the party they blame Blaze and her listeners for the call, they blow the whole call off as if it is some kind of joke.

While all of this is going on at the party the viewer is also allowed to see what Evil is up to. Evil is kind of a master of disguise in the film. We see him change his appearance and clothing (including a magic shrinking police uniform!) several times during the course of the film, yet he always has a portable tape recorder with him at all times. The first disguise we see him in is that of a doctor. He makes his way into an insane asylum that is celebrating New Years Eve by watching the party. If I say anything about New Years Evil I will state that Emmet t Alston definitely has captured a gritty and dirty little film here, the sets just reek with filth some of them to the point where you can smell it. Evil gets into the Asylum and immediately meets up with a pretty nurse. 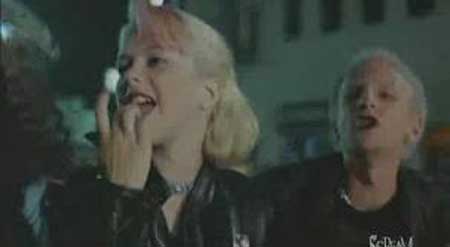 The pretty nurse proclaims that she is glad to see the man as they are understaffed and quite busy. It doesn’t take Evil but a few minutes of smooth dialogue before he produces a bottle of champagne from his bag and asks the young girl where they can go to enjoy it. Following the rules of any decent slasher the viewer already knows the fate of our pretty young nurse so I won’t go into great detail. During the act of murder however Evil turns on his tape recorder and records the deed, it’s a pretty dark scene as the viewer simply watches the stabbing and hears the New Years celebration from New York City at the same time. 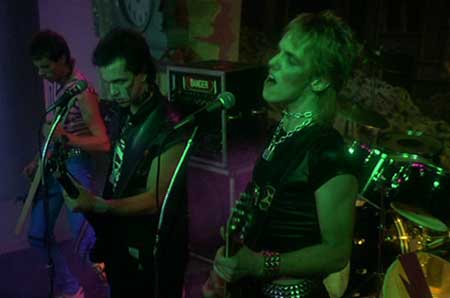 After some of the subpar bands play some mediocre music Blaze is once again on the air announcing that it is now midnight in New York City. Of course Evil makes a call as soon as he is able; he even generously plays the recording of the murder for the audience to hear. Evil doesn’t just stop at letting people hear his dirty work; he tells everyone where the young girl’s body can be found. Blaze ends the call and it’s only a matter of minutes before the police are right back on her as they only assume that Evil is going to strike each hour for the next three hours!

New Years Evil is a mean spirited little slasher film. The character Evil really is an evil person, even if he sounds like a complete tool when he says his name. His acts of murder are pretty gruesome; he mainly attacks with a switchblade knife leaving just the right amount of the red stuff on the camera for the gore hounds. Evil however does have one of the most original kills I have ever seen in a slasher movie; he kills a woman with a bag of marijuana! Unlike most slashers though Evil doesn’t wear a mask, though near the end of the film he is shown wearing a weird old man mask, for most of the film the viewer is allowed to see the stalkers face. There are also a lot of very creepy scenes throughout the movie including one where the viewer sees Derek spying on his mom wearing her nylons on his head and a pair of sweet 80’s sun glasses.

My favorite sequence in the film though is when Evil finds himself in a drive in theatre. During the entire sequence of events the viewer gets to hear some awesome vintage drive in trailers in the background. This scene also contains the closest thing to nudity that the entire film has to offer.

New Years Evil is a great addition to anyone’s slasher collection. It really is a shame that the film has yet to be released officially on DVD in America so until then most of us are going to have to watch our bootlegs.