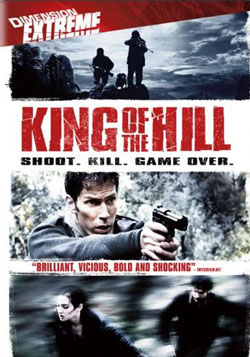 Quim drives around an isolated rural area through a maze of lanes. When he drives into the woods, he gets lost. Trying to find his direction, he suddenly gets shot from the hill. On his escape from gunshots, he meets Bea, an attractive young woman, who apparently is lost as well. Suspicious of each other, they join forces to run away through the forest, unprotected, cold, hunted…

A suspense thriller that delivers! This Spanish thriller originally named “El Rey de La Montana” comes at you like a ton of bricks.

Quim (Leonardo Sbaraglia) traveling though the country, stops off at a local food mart to gas up and make a call. While in conversation he notices beautiful “Bea” (María Valverde) who is in transition of shoplifting. With the men’s restroom out of order, Quim is forced to use the women’s facilities in which he bumps into Bea quite embarrassingly At this point every male fantasy is fulfilled as she quickly seduces him into having quick restroom sex and then leaves without a trace. Convinced now that this lady has pick pocketed him, Quim heads out on the highway with hopes of finding Bea and regaining his stolen wallet. When he does see her car, he follows her off road proving to be a fatal mistake.

I know…where’s this going? Where’s the thrills? – hold on…
As Quim ascends up the off mountain road, he is instantly startled by a gun shot to the side of his car. If that wasn’t enough, a sniper in hiding comes lurching out and starts taking shots at him. This begins our thrill ride of terror.

A road block further up is encountered, a reacquainting with the now stranded Bea and a forest run are all part of the plot as we are taken into a thrilling run for your life chase.

What I like especially on this film, which maybe due to it being a foreign film is it didn’t hit the usual typical marks we see in America cinema. It is disjointed and that’s the appeal. In US cinema it would be a car full of kids who make a series of stupid moves, including flagging down passerby’s that end up being the predator they are trying to get away from. No, the tone here is subtle and intense all at the same time.

A number of clever moves by director Gonzalo López-Gallego were incorporated to eliminate typical movie expectations. For one, by the 2 strangers having sex in the first 5 minutes, it takes away any sexual tension that may have built up later. In fact its almost a reverse approach. Sex now, get to know each other more later. Which is revealed over the course of a few conversations that prove to be mostly vague at best. This is not a weakness but a strategy that proves to be effective when a main character role is quickly removed.

We are also not given a motive , face or reason for the first hour of the movie as to why the 2 are being shot at by snipers. This aura of mystery works very effectively in the film by helping to maintain the suspense of the 2 being chased. You’ll also notice that there are many times when the couple could of easily been killed by the marksmen. This is proven when the security guard is handicapped and taken out. To me, the filmmaker was suggesting that there was a game in progress long before we were really given the background of cause. The reluctance to just kill off everyone suggested something different in play. When we finally are revealed the identity of the snipers, its done so quickly that the narrative almost changes instantly from a focus of the prey to a focus of the predators. It doesn’t take long to quickly put pieces together. While I don’t want to reveal too much, let me say the film moves clever in many additional ways.

As the 3rd act takes place, we are subjected to highly emotional perspective changes, morality plays, a misdirection of character and even an ending that still leaves you somewhat un-raveled by the whole ordeal. This movie is so out of the Hollywood mode of doing things that it excels for just that reason alone.

In addition the soundtrack score to this film also deserves recognition. Like the humming of droll machines…. it’s cold throbbing sound design lays a down a flavor that helps move the tension with equal disconnect. Gonzalo López-Gallego also has chosen a somewhat bleached earth tone film palette with a increase of yellows that heightens the grittiness. Not overly done but enough to do the trick.

Camera shots are well planned. Many times we only see what the director wants us to see to contribute to it’s flow. Examples of this are segments of moments where we are forced to only hear what’s going on rather than seen or emotional 3/4 close ups to heighten the scene with direct point of views. Or even the coldness of those killed off that we only observe from a distance to generate screen disconnects. The list goes on really.

However this film is one of a kind. It’s visceral gritty , intelligent and unnerving – Brilliant! – highly recommended on all counts.