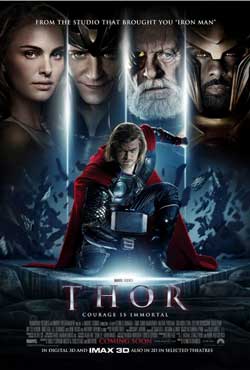 The powerful but arrogant warrior Thor is cast out of the fantastic realm of Asgard and sent to live amongst humans on Earth, where he soon becomes one of their finest defenders.

By the hoary hosts of Hoggoth! It’s a beautiful day outside..the Sun is shining brightly, the skies are Blue & the air is cool. I hate days like this. So what do I do? I go to the only place where I feel as comfortable as I am when I’m here in my mausoleum, the movies! And what, pray tell did I see today? “Thor“! I know it’s not a horror movie, don’t think I’m losing my mojo by going to see it. I just happen to know that a lot of my acolytes are comic fans as well as fans of all that is horrific. So, every so often I’ll do some of the heavy lifting for all of you & subject myself to a movie of this type & report back to all of you. I have lots of money to waste…my acolytes pay their dues directly to me. But I would imagine most of you don’t want to plop down your hard earned lucre unless it’s worth it. That’s why I’m here!! 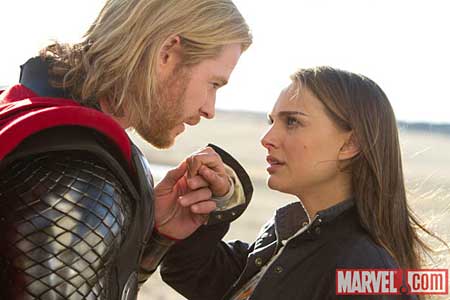 For the very few of you who don’t know of the character, “Thor” is Marvel comics version of a god. The thunder god to be exact. He has along with superstrength, the ability to call down thunder & create tornadoes with the help of his trusted hammer, Mjolnir. The hammer is sort of like a good dog in that it comes when Thor calls to it. It also gives him the ability to fly. He lives in the mythical realm of Asgard where he is surrounded by other gods who on occasion, meddle with whatever’s happening down on Earth. For the good of humanity of course. The movie tells of how Thor first ended up on Earth & his adventures therein. I gotta say that while it just falls shy of greatness, it’s still pretty good. 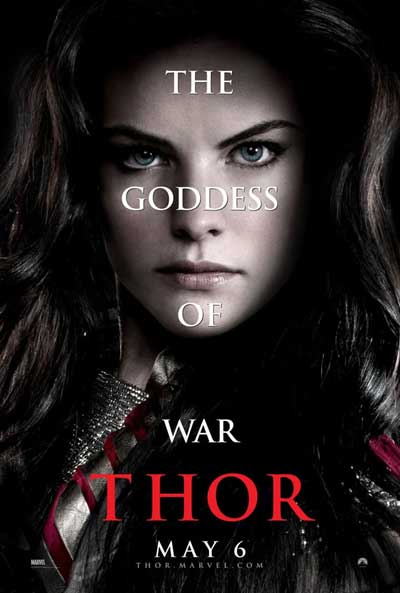 “Thor” begins with a scene taking place in the deserts of New Mexico, where Jane Foster (Natalie Portman) is conducting experiments with some atmospherical anomalies that she’s noticed have been taking place in the area. She’s accompanied by her friends Erik Selwig (Stellan Skarsgard) & Darcy Lewis (Kat Dennings). Both of them are skeptical of Jane’s theories when suddenly, one of her “anomalies” suddenly take place in front of their very eyes. A large cloud forms in front of them, a cloud that quickly turns into a tornado of sorts. As they drive & get closer to it, they accidentally hit someone with their vehicle. Someone who fell out of that tornado…

That someone would be Thor (Chris Hemsworth) of course. There is a brief bit of confusion as he rises to his feet demanding to know where he is before he gets tased by Darcy. The trio promptly take him to the hospital. It is here that we find out why Thor has ended up on Earth. You see, Thor is the son of Odin (Anthony Hopkins). Odin is the king of Asgard & all bow before him. Thor also has a brother, Loki (Tom Hiddleston) who is something of a prankster & sneaky as all get out. The story is told of how Odin & his warriors came to Earth ages ago to do battle with the Frost Giants, who wish to claim Earth as their own. After the battle, Odin & the others were looked upon as gods by earthlings and the Frost Giants were banished to their home realm, known as Yodelheim. The source of their power is kept in a room in Odin’s temple. Guarded at all times by two warriors & a big Gort-like being known only as “The Destroyer”.

Odin is ready to step down & bestow Thor with the job of King of Asgard when two Frost Giants make their way into the chamber where the source of their power is being held. They quickly wipe out the two warriors defending it but are slain by The Destroyer before they can make their escape. The Destroyer only makes himself known when he is needed. The ceremony interrupted, Odin & company make their way to the chamber to survey the damage. Thor is incensed that there was a breach & wants to travel to Yodelheim & destroy the Frost Giants once & for all. Odin warns him not to. Thor, being the petulant god of thunder that he is, goes ahead anyway. Along with his friends, The Warriors Three (Volstagg, Hogun & Fandral), the lady Sif & Loki. Once there they are warned by the leader of the Frost Giants (King Laufey) to leave before they are destroyed. Thor doesn’t take kindly to this & a battle is waged. One in which Thor & company are about to lose before being rescued by Odin at the last moment. Upon their return to Asgard, Odin banishes Thor for his arrogance to Earth..along with the mighty Mjolnir. Here, Thor has no super strength although he’s still one hell of a fighter. He’s a mortal now & must prove that he is worthy of handling Mjolnir & more importantly prove that he is worthy of being king of Asgard. In the meanwhile, S.H.I.E.L.D agent Coulson (Clark Gregg) is investigating the strange hammer that has fallen into the desert as well. A hammer that cannot be moved by anyone no matter how hard they try… 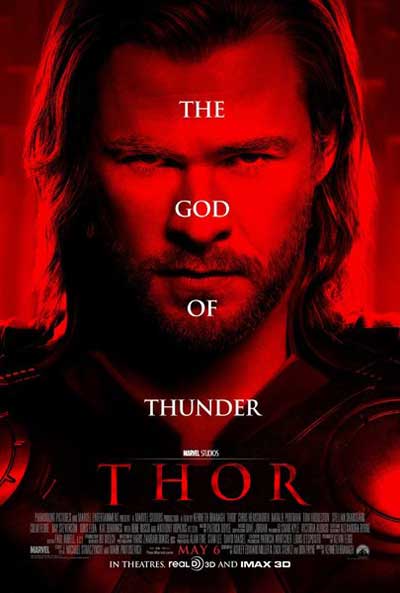 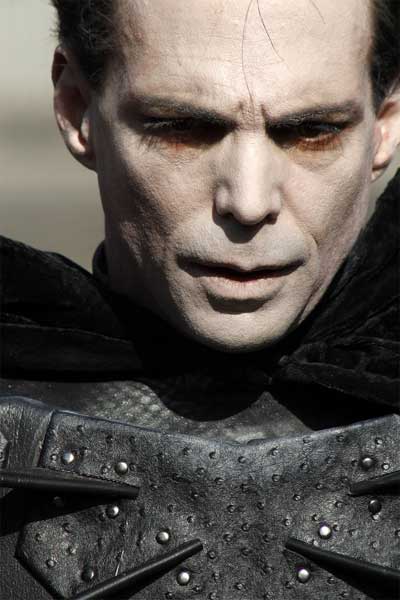 I was worried when I first heard that Kenneth Branagh was directing “Thor”. Although he would seem to be the right person to direct it since “Thor” always seemed to be Shakesperian in a sense, I thought he would make it very talky & dull. I was wrong. “Thor” moves along at a brisk clip for awhile. It does get bogged down a bit in the middle. When everyone is trying to make sense of who or what he is. And to be blunt, Natalie Portman is kind of dull in the role of love interest for Thor. She’s just too mousy, too wishy washy, too tiny! Thor towers over her, which is funny because when they finally have their first kiss they’re looking into each others eyes even though Thor isn’t holding her up at all. The best scenes take place in Asgard & the other realms. In these scenes there is a majesty, an epicness that makes you sit up and pay attention. You would think that Branagh had been directing action films like this all along. His hand is sure & his direction is tight here. As I said earlier, it does turn into a bit of a slog in the middle but I suppose you could just chalk that up to getting ready for the big finale.

There are lots of little bits in “Thor” that point directly to what Marvel plans for the future of the franchise & one giant Easter Egg in the middle of the film involving one character in particular. I won’t name names (In actuality, the role is unbilled in the credits) but look for Jeremy Renner in the middle of the movie. He’s only in it for about five minutes but if you’re a comic fan you’ll know exactly who he’s supposed to be. I actually got excited when he popped up & it was a nice little teaser for “The Avengers” movie that is coming next year. Of course, Stan Lee makes a cameo & Stark Enterprises is mentioned as well as Don Blake who was Thor’s alter ego when the comic first debuted it the 60’s. 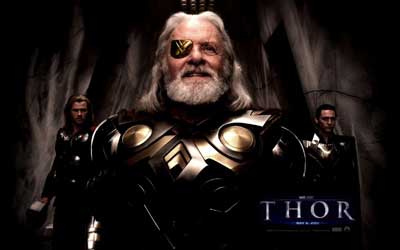 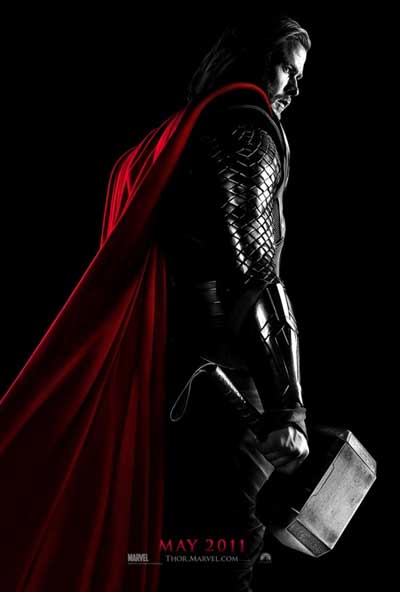 “Thor” is hardly the best of the Marvel superhero movies (I’m still partial to the first “Blade’ film myself, forgot he was a superhero as well huh)? But it’s better than both “Hulk” films, “Iron Man 2” & “Spider-Man” 1 & 3 (2 was awesome)! Hemsworth is perfect in the part as the roughhousing Asgardian who needs to be put in his place before he realizes what he actually is. Hopkins is suitably royal as Odin & The Warriors Three (Ray Stevenson, Tadanobu Asano & Josh Dallas) are well thought out characters. The Lady Sif is played by Jaimie Alexander & she does well in her role also. I should mention Idris Elba as Heimdall, who guards the Rainbow Bridge that leads to Asgard & all of the other realms. He is supposed to be stoic & staid, which he is. But Elba gives him a bit of humanity as well. Mostly with his eyes, which is no small feat I’m sure. Rene Russo also has a small part as Odin’s wife, Frigga (I love that name)!

I saw “Thor” in 3D but it is hardly necessary. The film was converted to 3D so there isn’t a lot of 3D spectacle to go around. But the scenes on the Rainbow bridge are very well thought out & look awesome in 3D. But it certainly won’t change the experience for you if you saw it in 2D. In other words it’s not a deal breaker so you can save your money & see it in 2D. You won’t be missing much. The film also has the (By now) expected coda after the end credits. Which here involve Nick Fury (Samuel Jackson) & Erik Selwig in a underground facility. Nick has something to show Erik & once again, if you follow comics at all, once you see it..you’ll know what it is. 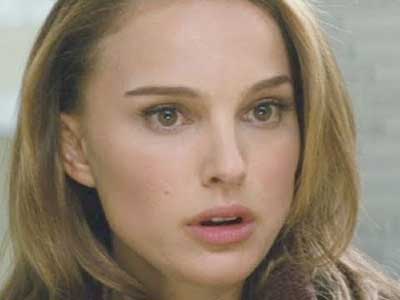 We are also informed that Thor will be returning in “The Avengers’ film next year. Which is good news because I want to see more of the character. He’s exciting, powerful & funny in a fish out of water kinda way. I enjoyed “Thor” more than I thought I would for sure & give it 3 1/2 shrouds. It’s a great way to open up the Summer movie season & it’s a pretty fun time as well. Now just wait for a dreary day to see it. I wish I would’ve…I hate going out in the Sun.