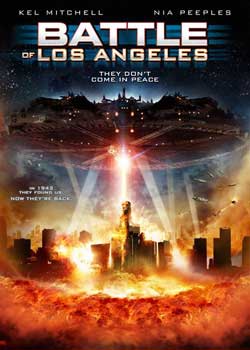 Nearly 70 years after the US military engaged an mysterious flying craft in the nighttime sky over Los Angeles, the vengeful interplanetary visitors return to settle the score in this sci-fi action adventure starring Kel Mitchell and Nia Peeples. When the invaders attempt to cripple the military by destroying our communications technology, disgraced Air Force Reserve Captain Tyler Laughlin rounds up a small squadron of determined survivors, and leads a mission to knock the alien mothership right out of the sky.

I’ve reviewed films by The Asylum before and as always, you have to take these kinds of movies with a grain of salt. Battle Of Los Angeles is no different. Cheap, cheesy and many times will have you either chuckling to yourself at the absurdity of it all or shaking your head in utter disbelief. Hey, don’t say I didn’t warn you if you decide to watch this one.

This time The Asylum’s target is Battle: Los Angeles, which I admit I have never seen. But lots more gets thrown in including shades of Independence Day, E.T. and even Terminator 2. Now that is an awful lot of ground to cover, but as always it is done with a wink and a smile.

Our story gets moving right off the bat with an enormous alien ship parking itself over the city of Los Angeles and promptly blowing it to smithereens. You don’t have to wait forty some minutes like you did in Independence Day, nope, these aliens mean business and they aren’t waiting around for us to try and communicate with some type of olive branch of peace.

A squadron of fighter jets (with the very cool name of NCR Street Gang) is dispatched to take care of this nuisance but they soon find themselves a bit behind the times technology wise. All of the missiles that they fire at the mother ship get captured by a strange blue beam and are quickly reprogrammed to come after the fighter jets that shot them. To use a brilliant quote from one of the pilots, “the enemy is hostile, they’re using our weapons against us.” Oh my.

After that little mission fails, it’s on to the Air National Guard remote base just north of Los Angeles. Here is where we meet most of the cast that’s going to be with us on the rest of the adventure and boy, what a bunch they are. Led by Commander Wakes (playing the cheese to the hilt by Robert Pike Daniel), these guys and gals are almost ready for anything. One thing they all must do is run out of their respectful quarters, look at what use to be Los Angeles in the distance and then turn and run for their weapons. It wouldn’t be so bad, I suppose, if they didn’t all feel the need to practically do it one at a time. But I digress.

One cool plot twist has them encountering Captain Pete Rogers, an airman who mysteriously disappeared sixty-eight years ago in 1942 and to their astonishment hasn’t aged one bit. Just what in the world was he doing all of these years? They figure it best to get him to an Area 51-like bunker for safety. On the way they run into Nia Peeples, I mean Carla, who for all intents and purposes is one deadly lady, what with her katana sword and all.

This is one weird, crazy and uneven movie. You have to understand what you’re getting with The Asylum. Cheap, cheap and well, cheap. But that doesn’t mean there aren’t some corny gems to be found inside. I love how everyone seems to think that shooting machine guns at an advanced alien spacecraft is nothing short of a great idea. My favorite part though is the name they give the missions. “Housekeeping Protocol” and “Protocol Clean Sweep” had me thinking that at any moment the Merry Maids would show up and save the day.

The Battle Of Los Angeles is only recommended for those who are fans of The Asylum. This was presented by the Syfy channel so take of that what you will. If you aren’t expecting much you’ll have a good time watching this. And while for pretty much any other movie that might be construed as a negative review, for The Asylum it’s par for the course. So sit back, turn off your brain and just relax. There are worst ways to kill a Saturday afternoon.