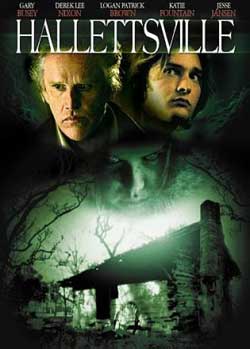 Tyler Jensen (Derek Lee Nixon, who co-wrote the script) and his pals in a tiny Texas town enjoy hanging out in Tyler’s new digs. That is, until said pals start mysteriously dying. Tyler must act fast if he wants save himself and his girlfriend. Gary Busey co-stars as the wily Sheriff David Ketchum, who presides over the mayhem in this supernatural thriller, which also stars Logan Patrick Brown and Katie Fountain.

Hallettsville looks like a film that was made in a hurry, with no consideration for making the characters seem interesting or fleshing out a potentially good story line. In the films introduction, we are greeted to a series of jumbled 1901 flashbacks of school children being murdered, hanged and then buried. The flashbacks are revealed to be the nightmare of college kid, Tyler Jensen (Derek Lee Nixon). In the next scene we see Tyler at his Grandmother’s funeral. Outside of the church, he meets up with some of his lifelong friends, Luke (Logan Patrick Brown), who has apparently befriended the ghost that haunts his house, Mark (Jordan Brower), Adam (Aidan Marus), and Jonathan (Jesse Janzen), a neurotic nerd who enjoys telling dead baby jokes (What’s funnier than a dead baby? A dead baby in a clown suit!)

After the funeral and a brief confrontation with his ex-girlfriend, April (Katie Fountain) outside of his school, Tyler and his mother (GiGi Erneta) discuss Tyler’s plans for spring break. He suggests that he spend the weekend up at his very recently deceased grandmother’s place in Hallettsville before the property is sold. Mom doesn’t like the idea, but promises to run it by his father and see. After encountering April a couple more times, Tyler agrees to work it out with her after making her promise to never lie to or hurt him again.

The gang meet up at Tyler’s house to prepare for the trip. The scene introduces two new girls, Kristin (Karloy Giardello) and Candice (Brooke Baker) before they all depart in Luke’s truck. While speeding down the road, the group gets pulled over by Sheriff David Ketchum, played by none other than real life lunatic and actor, Gary Busey. Ketchum informs the kids that Hallettsville is a quiet town and it’s his job to keep it quiet and lets them off with only a warning. Soon after arriving at the old house, the college kids start to see strange things, like little kids appearing and then disappearing in the rooms and around the property. During a campfire scene, Tyler tells the group of an old school house that was built on the property in the early 1900s. The school teacher became ill and on his deathbed, he made a deal with who, I assume, is the devil or a demon of some sort, to live forever. To pay the dark one back for the favor, the teacher has slaughter all of the school children.

The acting in this movie is flat and uninteresting, making the entire group unlikeable from the get-go. The only character out of the stale, cookie cutter cast that I found to be remotely tolerable was Jonathan because his constant complaints and morbid sense of humor were slightly amusing.

Sometimes, if the acting and storyline falls flat, a film can be saved by some interesting kills and bloodshed, but this is another aspect where Hallettsville fails miserably. In almost every scene where someone is about to bite the big one, the camera cuts away from the action and into another unimaginative scene with stale, worn out dialogue.
Throughout the film, the teens are haunted by several ghost children, presumably the children that were originally killed by the school teacher in 1901, but some dull CGI effects make these scenes and the little antagonists more laughable than scary. The only thing that I found that was well done in the movie was the make up effects of the demon school teacher, I was surprised to see that they used practical effects techniques instead of making the monster into some Sci-fi channel, computer generated monstrosity.

There’s really no reason to watch Hallettsville, unless you’re a big Gary Busey fan. I usually don’t like to use the word ‘suck’ to describe a movie, but in this case it’s the only word that comes to mind. Hallettsville sucks.