SYNOPSIS:
“An expedition is sent from Earth to Altair in the constellation of Aquilae (some seventeen light years from Earth) to discover what happened to a colony of settlers on its fourth planet, Altair IV. What they discover is how and why an alien race of geniuses destroyed itself overnight while leaving their technology intact at some point in the distant, distant past.” (courtesy IMDB)

REVIEW:
“Another one of them worlds. No beer, no women, no pool parlours. Nothing to do but throw rocks at tin cans, and we gotta bring our own cans.” So laments Cookie (Earl Holliman), chief cook and comic relief of the United Planets Cruiser C57D. Under the leadership of Commander J.J. Adams (Leslie Nielsen), he and his sex-starved crew are approaching the lonely red planet known as Altair IV. They’ve been cooped up in their ship for close on two years, on a quest to investigate what’s become of the Bellerophon mission, launched some twenty years prior. A radio message from the earlier mission’s sole survivor firmly warns not to land the ship, but this only increases the Commander’s determination for answers.

Disregarding the message, they land and are quickly greeted by a courteous robot named Robby. He shuttles the disbelieving upper ranks across the barren terrain of Altair IV to the technologically advanced home of grumpy philologist Morbius (Walter Pidgeon). Cordially offering the officers lunch, he explains that the other members of the Bellerophon party succumbed to an incomprehensible force in the first year of their arrival.

But further discussion is abruptly interrupted when Morbius’ mini-skirted eighteen-year-old daughter Altair (Anne Francis) appears, to the crew’s obvious delight. Having never laid eyes on a young man before, let alone the handpicked ready-for-action specimens of the C57D, naive Altair is soon trading kisses with crew members, in particular confirmed space-wolf Jerry (Jack Kelly). Fully aware of the, ahem, stiff competition he faces from the Commander, Jerry warns Altair away from Adams by somewhat unfairly claiming his notoriety across seven planetary systems. But romantic interludes are forced to take a back seat when, as Morbius predicted, the mysterious force is back, and crew and equipment are being savaged with terrifying ferocity.

In terms of intelligence, imagination and production values, Fred Wilcox‘s grandly produced science fiction classic still towers head-and-shoulders above most of its genre peers. While Forbidden Planet (1956) could hardly be called a sophisticated reworking of William Shakespeare‘s The Tempest, it’s funky blend of Oedipal and Freudian themes elevate it far above the usual radioactive monsters and alien invasion fare that studios commonly defined as science fiction movies in the fifties. Sure, its characters might be as stereotypical as any Hollywood submarine picture from the era and its pace occasionally lumpy, but Forbidden Planet’s irresistibly retro-futuristic art direction, winning sense of humour, and dated but remarkable special effects guarantee Forbidden Planet rocks where it counts.

The barely-seen Id monster, tearing its way through a force-field, is still an impressive piece of animation. It’s no wonder, as MGM studios wanted the very best for their only science fiction effort of the fifties and, in a rare act of studio cooperation, hired a team of Disney animators to touch-up several sequences including the Id monster, the C57D landing, and when Robby short-circuits.

The cavernous subterranean machinery of the long-dead Krell race is gloriously and spectacularly realised. “Gentlemen…” says Morbius with a dramatic pause, “…prepare your minds for a new scale of physical scientific values.” The C57D crew gaze in awe (as do we) as they ride the monorail through a massive complex of tunnels dwarfed by centuries-old reactors, or amble gob-smacked along walkways spanning ventilation shafts that disappear into infinity.

Louis Barron and Bebe Barron contributed the film’s distinctive and eerie electronic soundtrack, a bold choice for a very conservative studio known for its musicals, and one that aids tremendously in establishing the otherworldly atmosphere of Altair IV. The Barrons chose to call their soundtrack Electronic Tonalities, rather than equating it to any sort of musical score. In all honesty, MGM had no idea what they had, and not only copyrighted the tonalities, but also the very tubes and transistors used in their production.

The DVD I watched boasts both Fullscreen and Widescreen ratios and, apart from a few scratchy moments between reel changes, the print looks mighty fine. I’m very familiar with Forbidden Planet, but while re-watching it recently I couldn’t help but feel I was viewing a long-lost pilot episode of Star Trek – the militaristic crew dynamics, a trio of investigating officers, a script concerning man’s intelligence and place in the universe – it becomes quite obvious what Gene Roddenberry was trying to emulate with television’s Star Trek. Hmmm, you know of course, both Leslie Nielsen and William ‘The Shat’ Shatner went on to have extensive careers in comedy, too. Try not to think of that while watching Forbidden Planet, okay? Pretend I didn’t say anything.

It’s vitally important that you join me for the next edition of Horror News, because an old gypsy woman told me that unless you read all my reviews, the entire world will be destroyed. Normally I’m highly skeptical of such claims, but she was just so certain, I feel we’d best not take the risk. So enjoy your week, and remember, the survival of the entire world depends on you. Toodles! 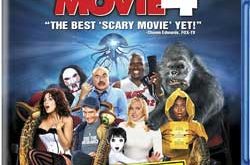