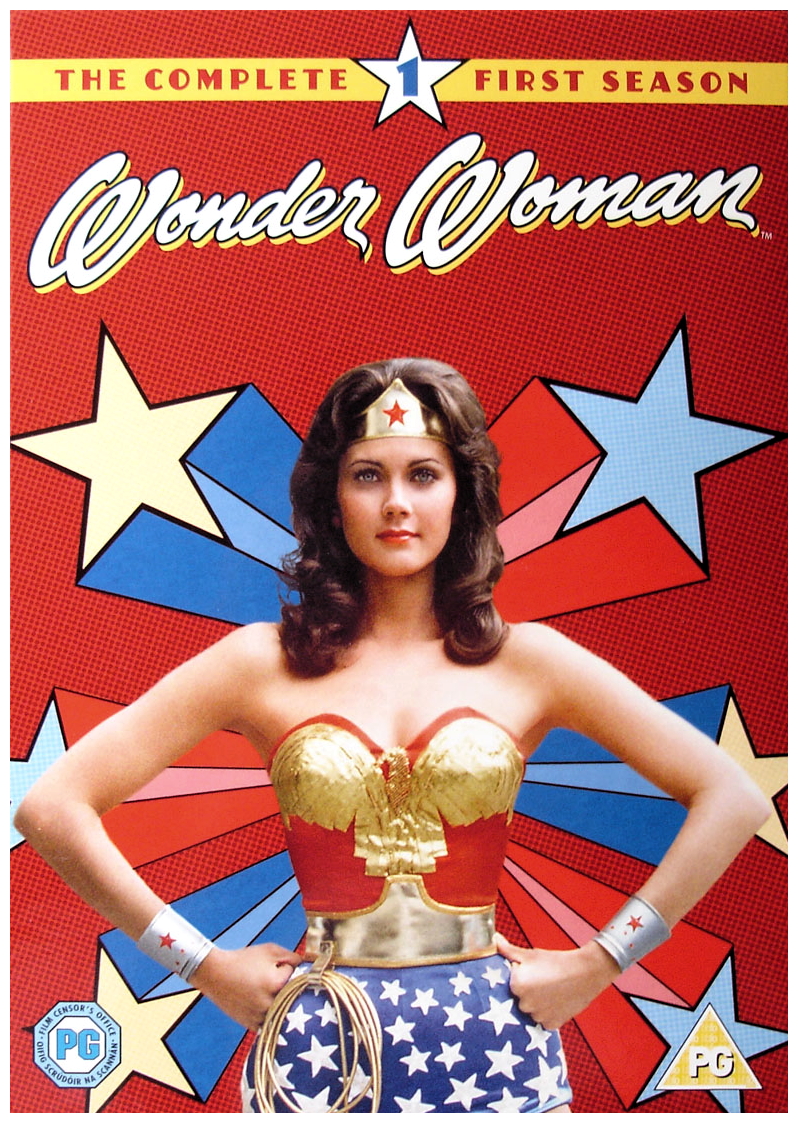 In 1940, after serving on an advisory board for DC Comics, psychiatrist William Moulton Marston created the character of Wonder Woman in an effort to establish some balance in the male-dominated world of superheroes. Writing as Charles Moulton he crafted a female character that was equally heroic so young women would have a hero with whom to identify. Wonder Woman’s story begins with United States Army pilot Steve Trevor’s crash-landing on Paradise Island, home to a warrior race of Amazonian women. Diana, their princess, nurses him back to health with a purple-coloured ray, and promptly falls in love with him. When their goddess Aphrodite decides that Trevor should be returned to his own world by one of their own kind, Diana participates in a tournament to be the one chosen. Even though her mother Queen Hippolyte forbids her, Diana does it anyway, hiding her identity behind a mask. She eventually emerges as the winner, and her mother changes her mind, giving her daughter a magic lasso and bulletproof bracelets. 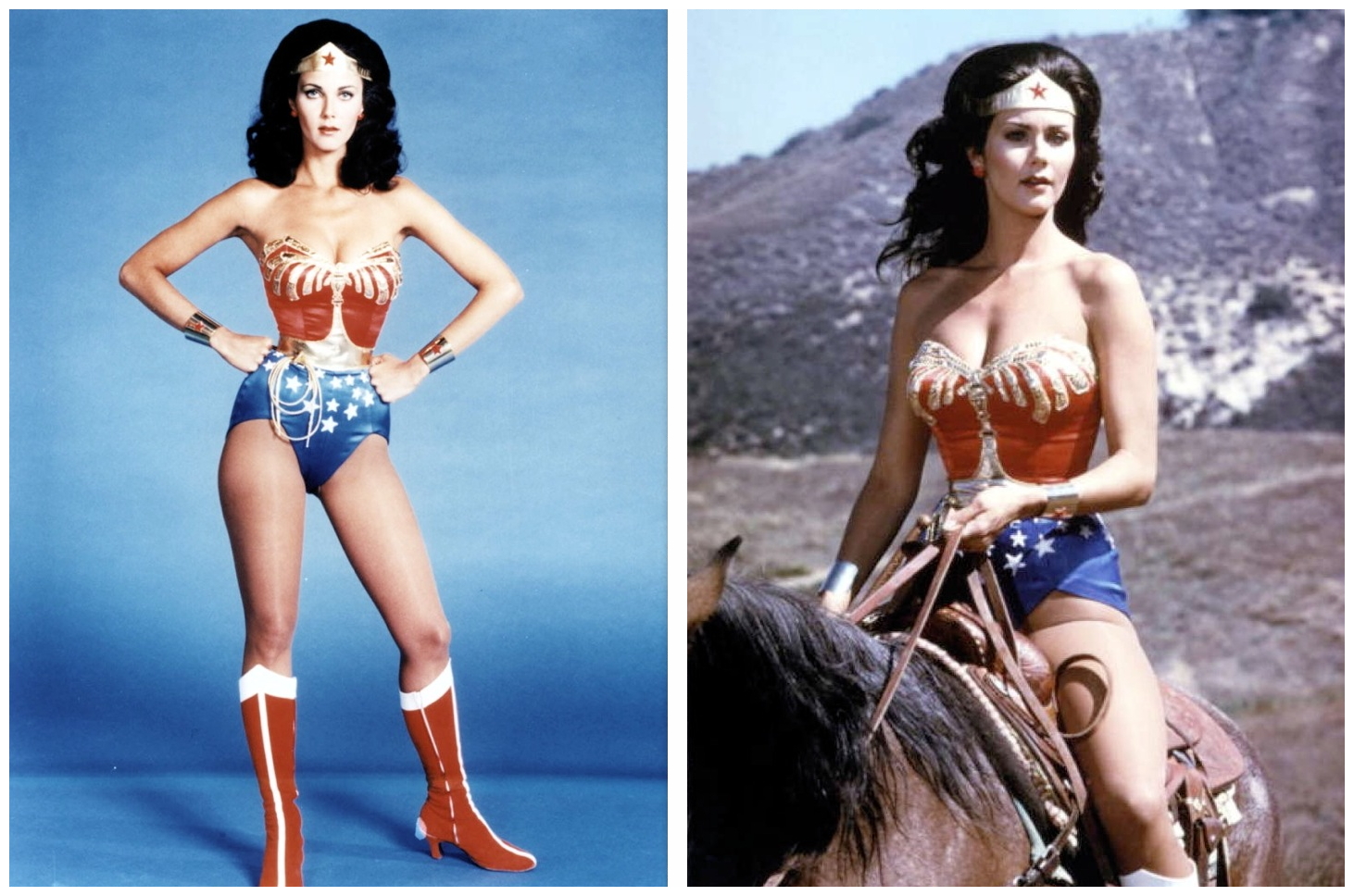 Calling herself Diana Prince, she travels to ‘Man’s World’ as Trevor’s nurse and fights crime and the evils of fascism as Wonder Woman, sometimes assisted by the Holliday Girls, a sorority run by Etta Candy. Between 1940 and 1945, Wonder Woman fought Nazis, spies and saboteurs at the side of Steve Trevor, who was promoted to Army Intelligence. Later she joined the Justice Society Of America as its first female member. At one point Diana surrendered her powers, gave up her signature costume, and studied martial arts to become a secret agent. Thankfully, Wonder Woman’s powers and traditional costume were restored, largely due to the popularity of the 1975 television series starring Lynda Carter, but she wasn’t the first. The star-spangled Amazon made her first media appearance in 1967 in a five-minute test film titled Who’s Afraid Of Diana Prince? starring Ellie Wood Walker as Diana, while Linda Harrison – Nova in Planet Of The Apes (1968) – played her alter-ego. 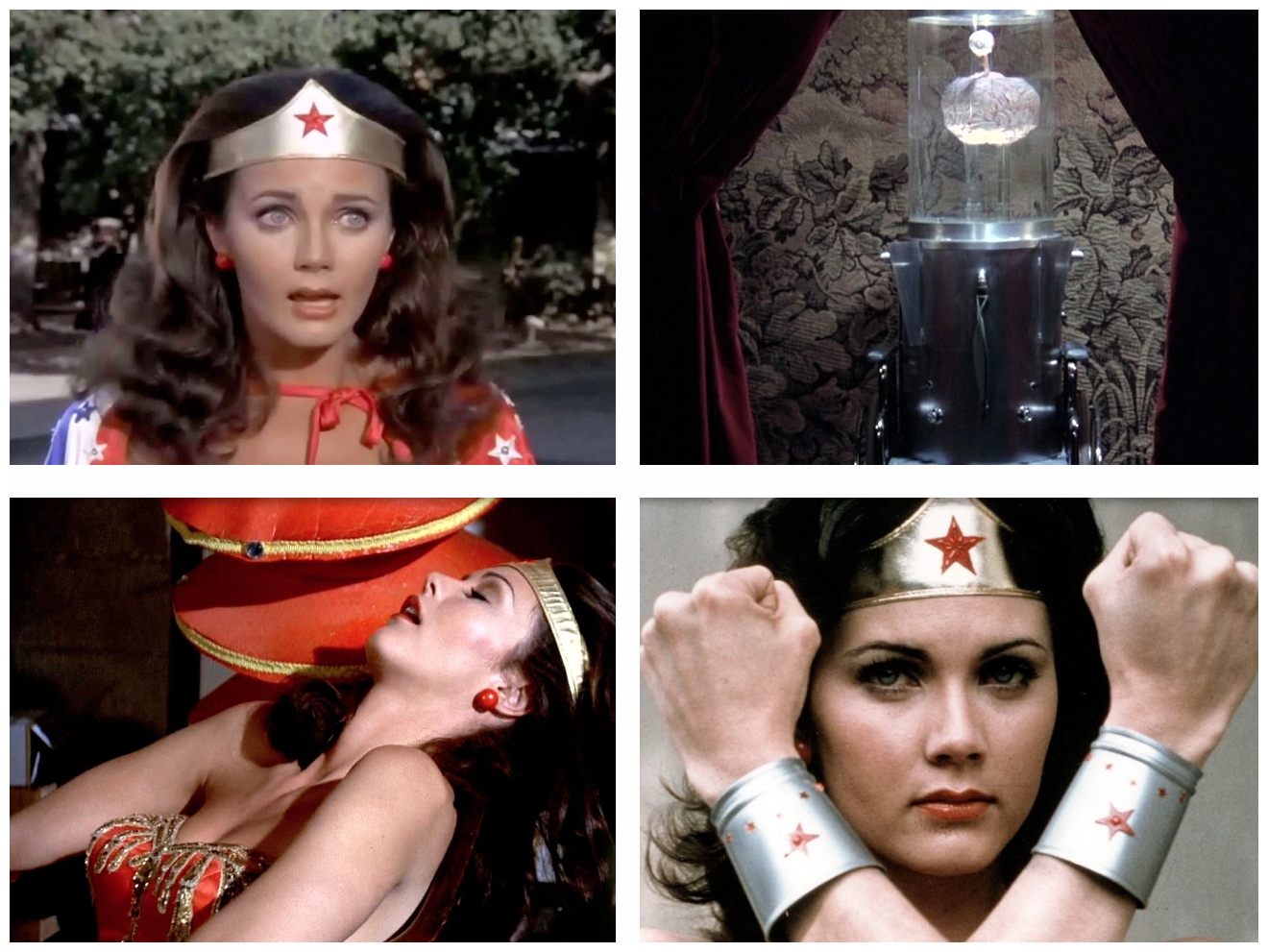 The test reel was shot by William Dozier and Greenway Productions, the company behind The Green Hornet and Batman television series. Dozier had hoped to launch an ongoing half-hour series, but the test was not very well received – as a matter of fact it’s awful and outright embarrassing, as most of the running time is taken up with Diana’s suburban Jewish mother (Maudie Prickett) complaining that she needs a boyfriend – thankfully, plans for the show were shelved indefinitely. Producer John G. Stephens unveiled a ninety-minute made-for-television movie simply titled Wonder Woman (1974) starring tennis professional Cathy Lee Crosby as the female crime-fighter. Burdened with a tedious script by John D.F. Black and ploddingly directed by Vincent McEvetty, the lacklustre revamping of the character (new costume and powers) bombed miserably. Baring little resemblance to the original comics, some critics suggest the movie’s plot-line was influenced by Diana’s short stint as a secret agent. 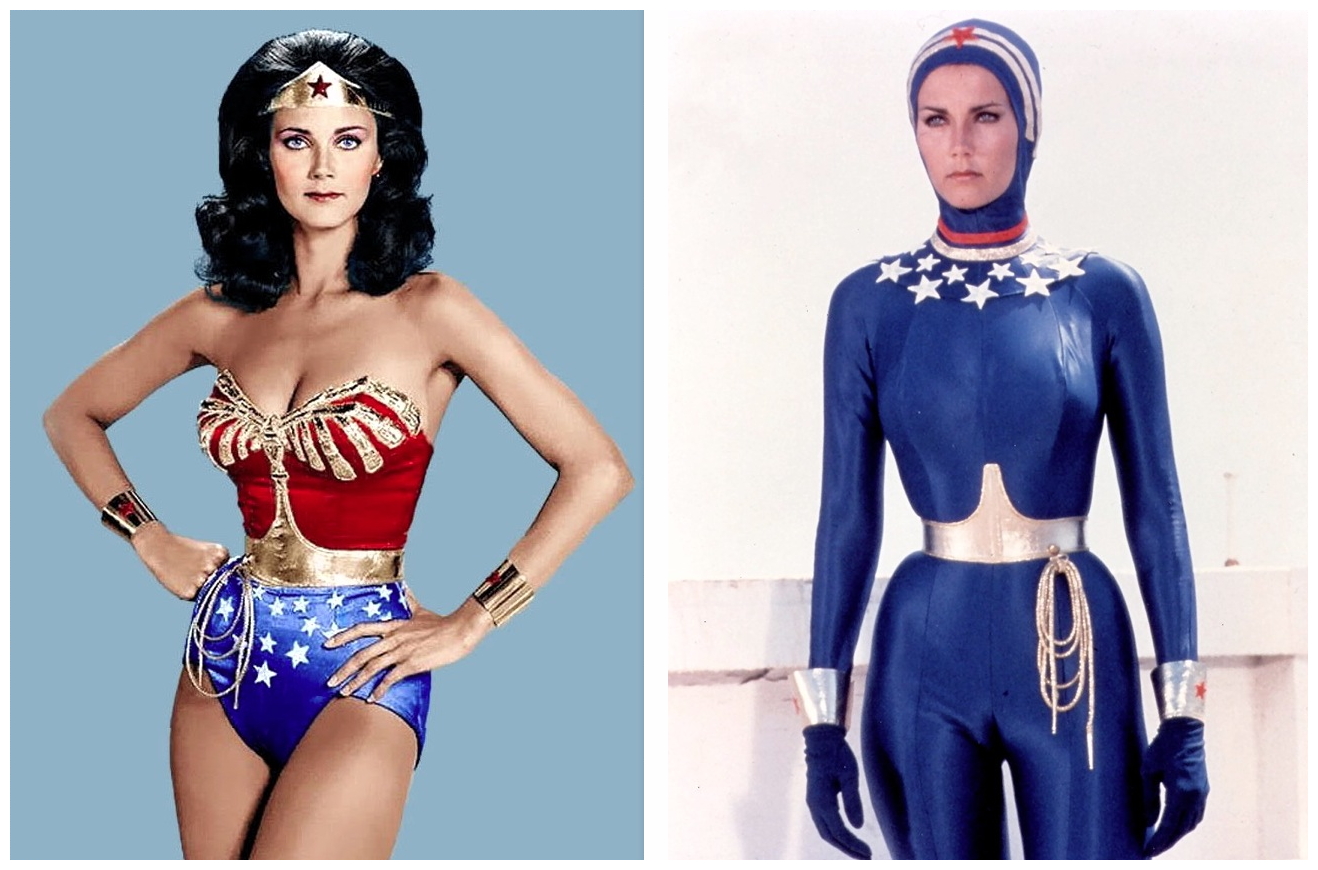 The following year, television producers got it right by remaining faithful to the character’s origins. Featuring newcomer Lynda Carter, The New Original Wonder Woman was broadcast in November of 1975. In an inexplicable move, ABC executives ordered only two one-hour episodes and presented them as Wonder Woman specials. Despite good ratings and warm reviews there was still no firm commitment for more, and The New Original Wonder Woman failed to land a regular spot on the network’s weekly schedule. It’s not that Wonder Woman wasn’t appreciated. ABC were so pleased with the strong showings that they regarded the non-series as their secret weapon to combat high-powered competition. Warner Brothers Television was thus commissioned to produce twelve more one-hour episodes for their 1976-1977 season. While other shows opened and failed, the super-Amazon rescued the network on a number of occasions. 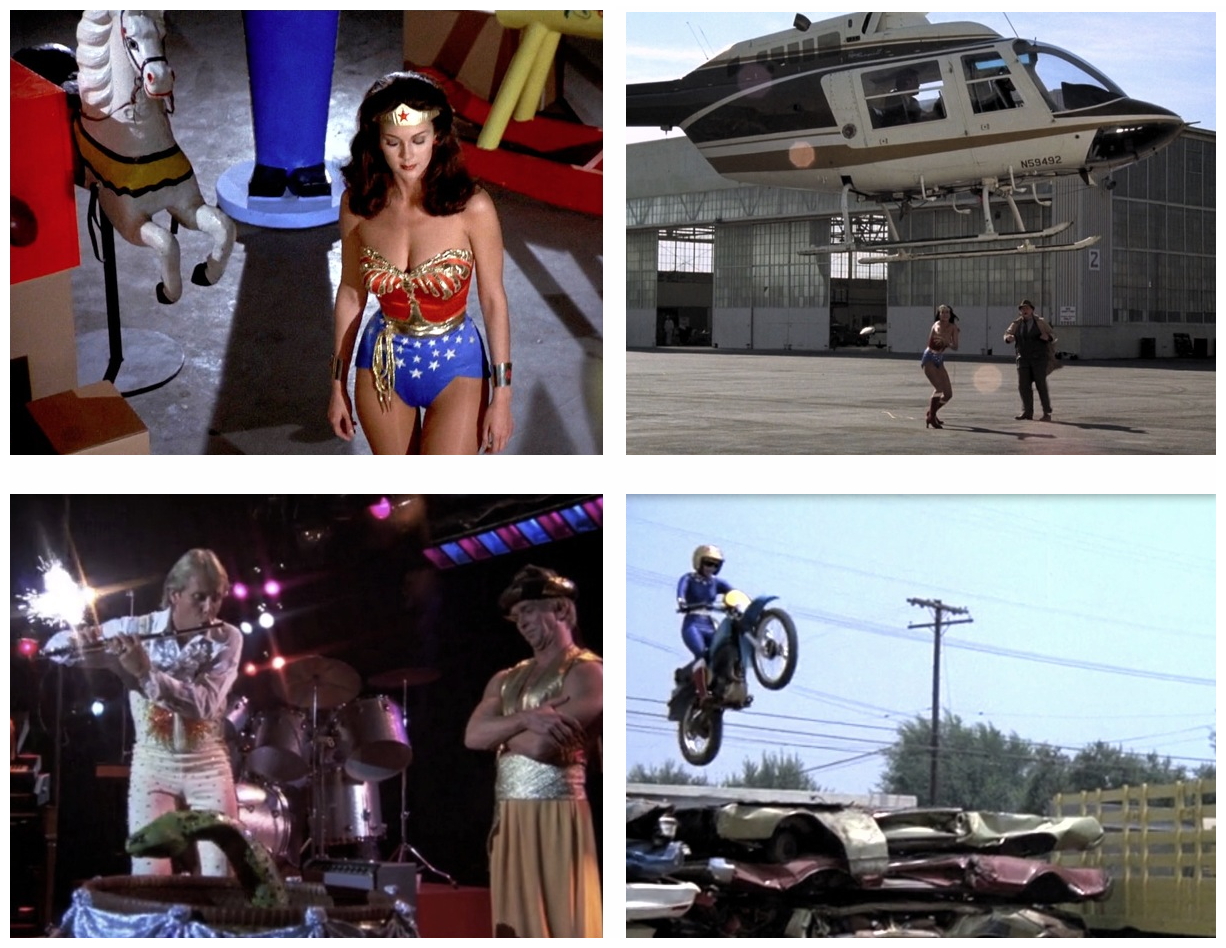 The show was comic-strip, pure and simple, set in the forties. Wonder Woman (Lynda Carter) came from an uncharted island where a band of Amazon women had fled to escape male domination by the ancient Greeks and Romans around 200 BC. On Paradise Island they found the magic substance called Feminum which, when moulded into a golden belt gave them superhuman strength and, in golden bracelets, could deflect bullets. It didn’t help their love-life though, so when Major Steve Trevor (Lyle Waggoner) of the US Army crash-landed on the island during World War Two, Wonder Woman fell in love and returned with him to America in the guise of his secretary. Major Trevor was unaware of her superpowers but, whenever trouble threatened, Yeoman Diana Prince could disappear for a while and whirl herself into Wonder Woman! She then reappeared, clad in sexy tights and draped in a cape that looked not unlike the US flag. 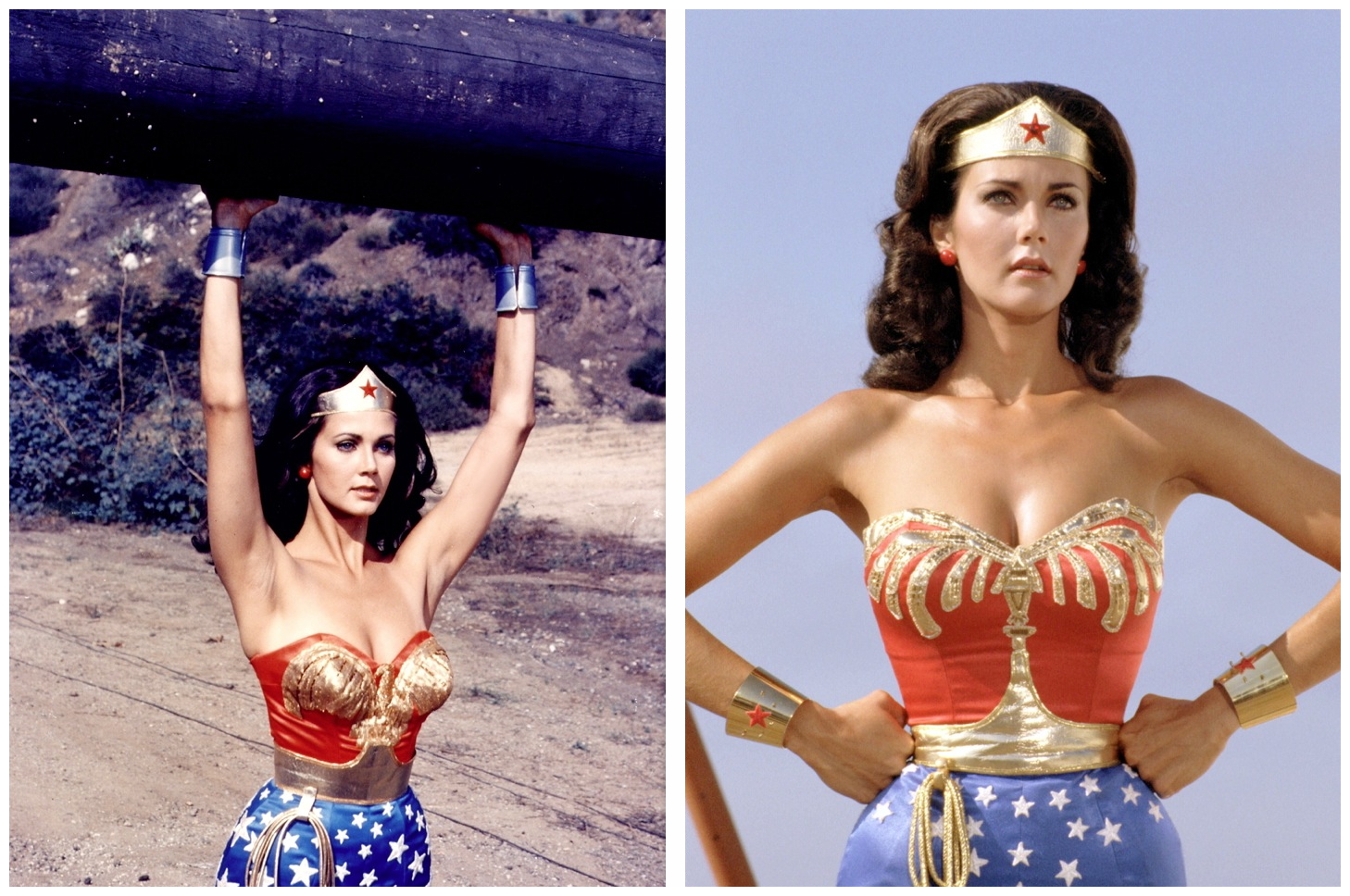 Her opponents were mostly Nazi agents, plus a few aliens from outer space, all of whom were dispatched in slam-bang-biff-pow style. Once the Nazis even found and occupied Paradise Island in their quest for Feminum, and they had their own version of Wonder Woman, named Fausta (Lynda Day George). Seen occasionally at Diana’s side was her younger sister Drusilla (Debra Winger) also known as Wonder Girl. Carter was not the most accomplished of actresses, but as the former Miss World-USA of 1973 she brought a sense of warmth and sincerity that was just right for the role. The capable supporting cast included Beatrice Colen as giddy Etta Candy, Richard Eastham as General Blankenship, and guests such as Eric Braeden, Red Buttons, Bradford Dillman, Anne Francis, Henry Gibson, Robert Hays, Carolyn Jones, Kurt Kaznar, Lance Kerwin, Cloris Leachman, Robert Loggia, Kenneth Mars, James Olson, Dick Van Patten, Vic Perrin, Robert Reed, Roy Rogers, John Saxon, Stella Stevens and Bobby Van contributed that much more to the show’s success. 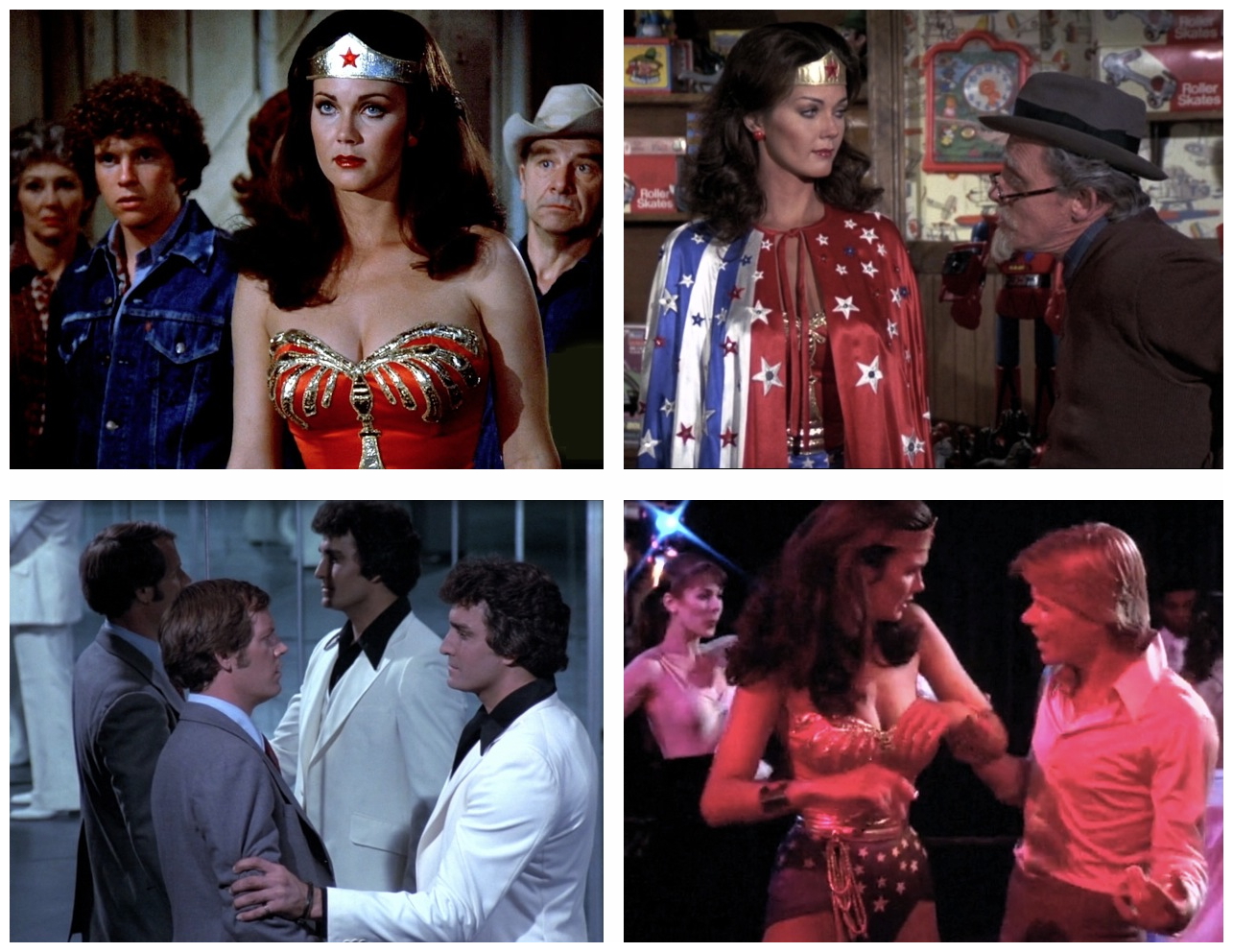 When rival network CBS announced their 1977-1978 TV line-up, many were surprised to see Wonder Woman on that network’s roster. Warner Brothers grew weary with ABC’s hesitancy and was anxious to provide a full-on series instead of an occasional handful of episodes. CBS agreed and snapped the show up for its own. It was retitled The New Adventures Of Wonder Woman – the ‘New’ referred to both the change in network and transport to modern seventies society. At her new home, Wonder Woman left much of her punch behind and provided only mediocre results. These CBS episodes aimed for straight adventure rather than good-natured camp of the first series. The biggest complaint about the updated efforts was that they became downright boring, and there was very little genuine suspense or action to recommend them. Gears shifted mid-season as a new producer, Bruce Lansbury, tried to recapture the innocent parody so much a part of the ABC presentations. 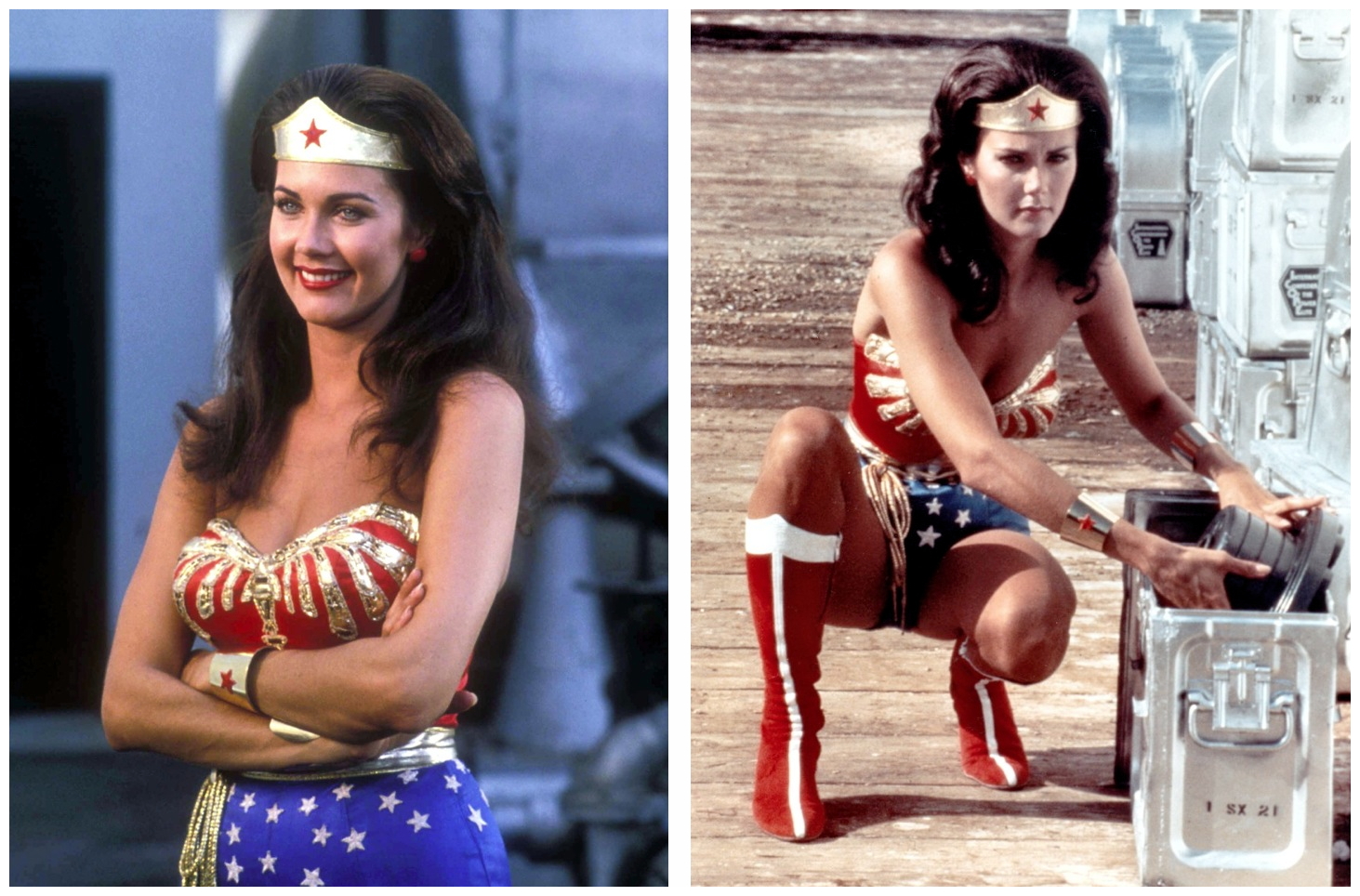 Under his guidance Wonder Woman took a more active role and things began to move. While not exactly Emmy-award winning material, these episodes were a step in the right direction. The heroine was returned to America to fight terrorists and subversive elements for the Inter-Agency Defence Command (IADC), where her boss was Joe Atkinson (Norman Burton). Working closely with her was the son of Steve Trevor, Steve Trevor Jr. (Lyle Waggoner). Since she had not aged at all (residents of Paradise Island had lifespans measured in centuries, not decades) and Steve Jr. was a dead ringer for his dad, the couple seemed virtually unchanged. Eve (Saundra Sharp) was Steve’s secretary. By the end of 1977 Joe Atkinson was was replaced by Steve as Diana’s boss, leaving her to go out alone on missions. A primary source of information for all IADC agents was the Internal Retrieval Associative (IRA) computer. 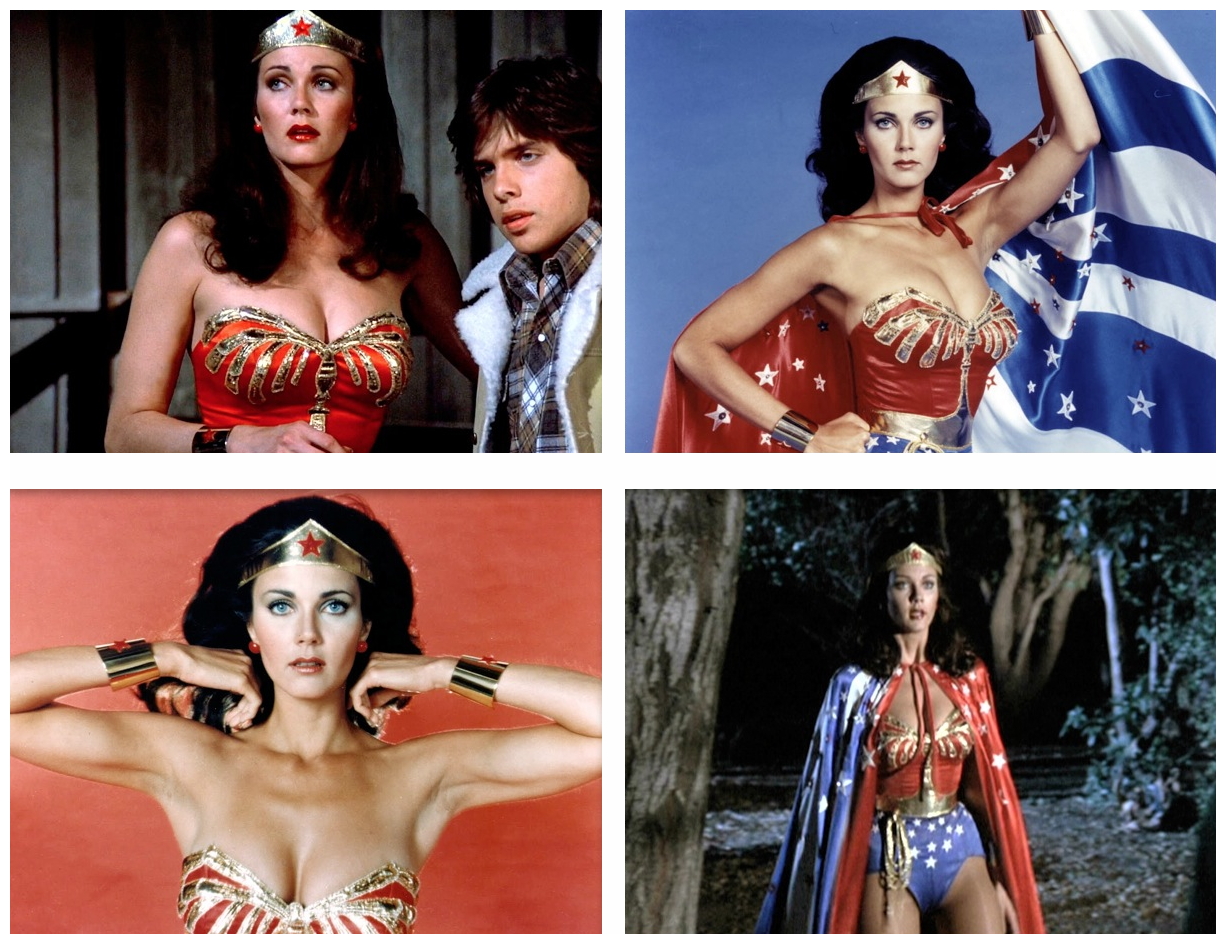 This wonderful device could actually communicate by voice with the agents (voiced by Tom Kratochzil). Despite the fact that Diana was no longer wearing spectacles to conceal her identity, only IRA knew who she really was. Adequate budgets and excellent stunt work (Lynda Carter was often doubled by Kitty O’Neil) added vitality to the previously dodgy proceedings. There were some clunkers, admittedly, but the ratings improved just enough to earn renewal. By the time The New Adventures Of Wonder Woman debuted for a second CBS season most of the adult audiences had drifted away. The producers saw this and made definite effort to woo the teenage crowd with stories focusing on popular fads, and yet more doses of science fiction. With the improved stories and lightweight competition in the same time-slot (Donnie & Marie, Sanford & Son), The New Adventures Of Wonder Woman seemed to be heading for smooth sailing on the Nielsen ratings rapids, and was even several points up on the previous season. 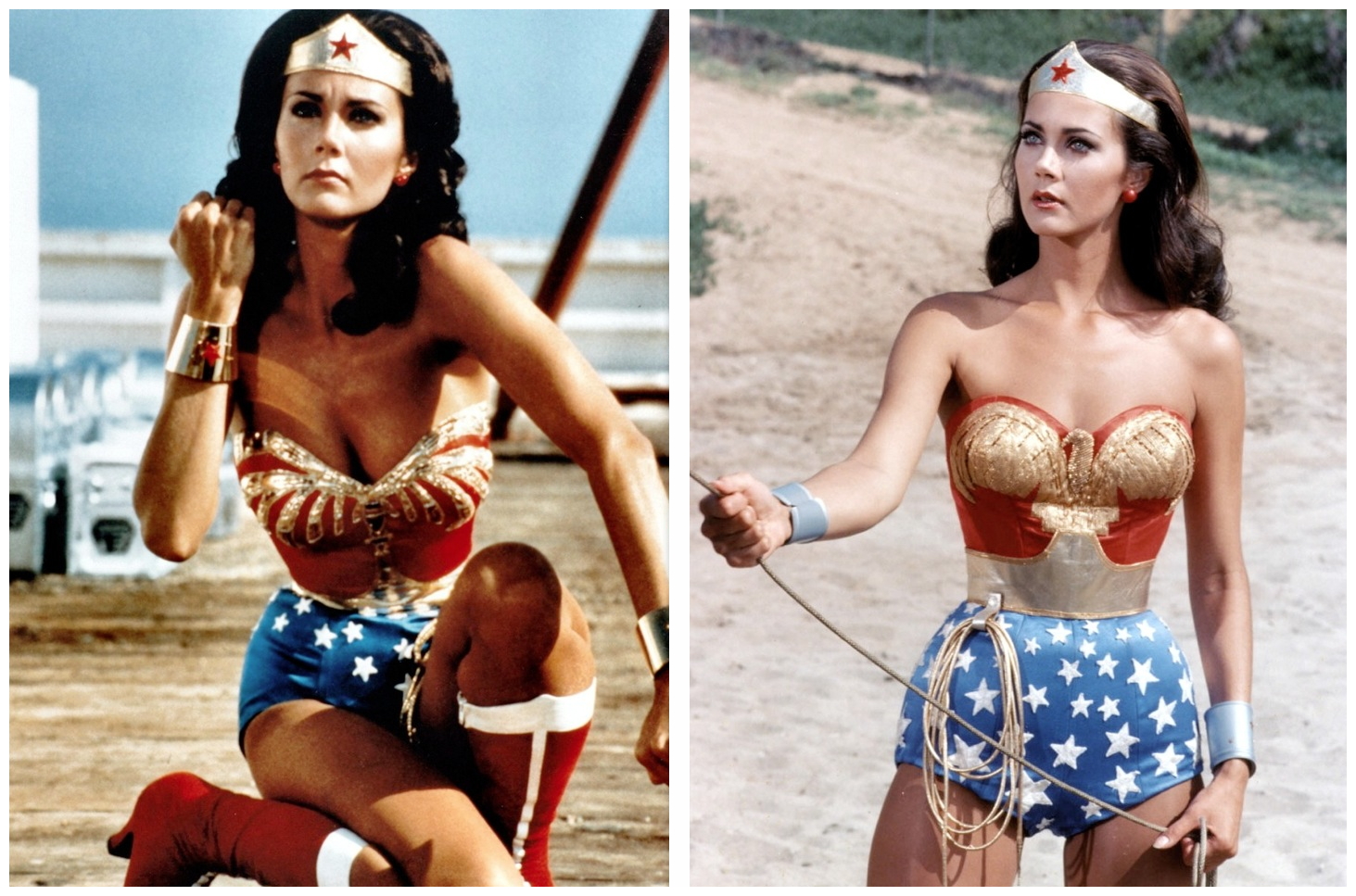 Why then did the network unceremoniously yank the Amazon from their schedule? CBS insisted that The New Adventures Of Wonder Woman was not cancelled, only ‘temporarily shelved’, but the handwriting was on the wall. The success of NBC’s Diff’rent Strokes was completely unexpected and its strong performance siphoned off most of Wonder Woman’s audience. Network executives were quick to take action and sought replacement for the temporarily ailing super-heroine series. Actress Lynda Carter was still in demand though, with a successful Las Vegas nightclub act, releasing an album of standards, then CBS signed her up for a musical-variety special and Warner Brothers put all 65 episodes into syndication. In the comics, DC’s epic crossover series Crisis On Infinite Earths (published 1985) helped explain how Wonder Woman could have served in World War Two and was also active as a superhero in the modern era but, when sales of her own book declined in 1986, she was married off to Steve Trevor and lived happily ever after. 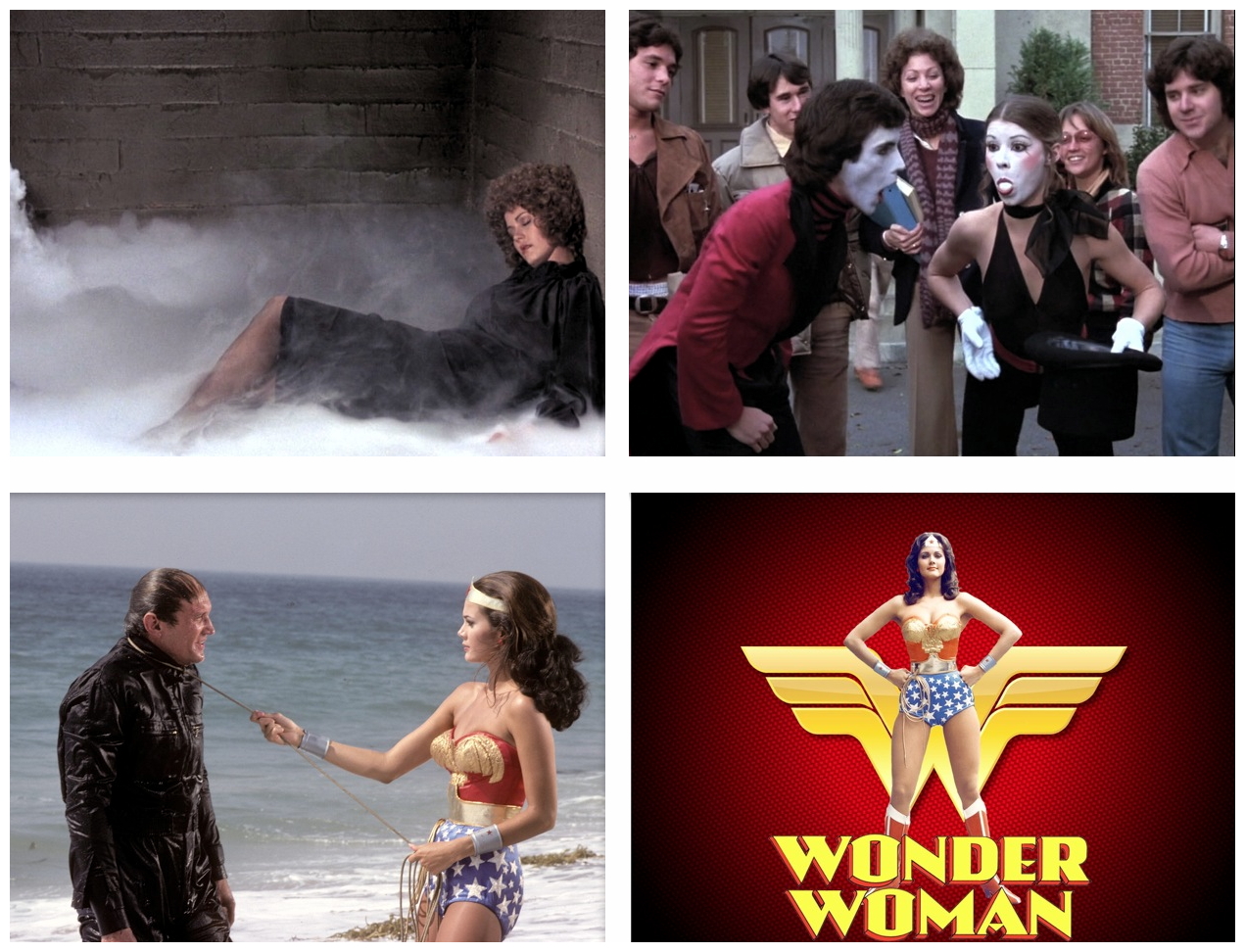 Well, at least until the next year, when DC decided to reboot her book and start over with George Perez in charge and, in 2006, Diana had returned to being a secret agent in a skintight jumpsuit. Apart from a number of appearances in animated films and TV shows, attempts have been made to produce a live-action TV series in more recent times, but none have emerged successfully yet. In 2011, NBC released a pilot for a series starring Adrianne Palicki as Wonder Woman that went no where and, in 2012, Warner Brothers considered a TV series titled Amazon, about the origins of Wonder Woman. Newcomer Gail Gadot played the Amazon in Batman V Superman: Dawn Of Justice (2016), looking quite different with an armband on one of her arms, a strap over her corset, and a blue bottom resembling a Roman war skirt. Gadot also stars in her first live-action solo film Wonder Woman (2017) due for release next month, as well as appearing this November in Justice League (2017), not to mention Justice League II (2019). And it’s with this brief glimpse into the future I’ll vanish into the night, but not before inviting you to rendezvous with me at the same time next week when I discuss another dubious treasure for…Horror News! Toodles!