It is a scary movie, but only because of Tim Curry. Plus, clowns are scary. Other things that are scary: blood coming up from your drain, phantom balloons that pop and spray blood everywhere, pictures that come alive, and people who live in sewers. This miniseries has all of these. The least scary part? The ending. Talk about a letdown. The clown that’s given us nightmares transforms into a terrible stop-motion spider? Uh, no. Not scary. 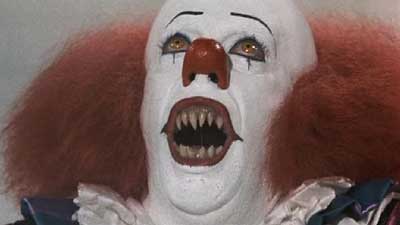 This film is a classic, and for good reason. It’s an atmospheric, slow-burn of a horror film and Bela Lugosi is creepy looking, though he was one fabulous guy. This film does, however, lack real scares, even by 30’s standards. “Look! There’s a wolf running across the lawn, right where Dracula should have been!” Wow. Not scary.

I adore Bruce Campbell. My last list was devoted entirely to his filmography. And I love Army of Darkness, but come on… skeletons come up from their graves just to poke and pull at the mighty Ash? I get the splat-stick comedy element, I do. It’s why I love Evil Dead II. But that moment is not even comedic, it’s just stupid. 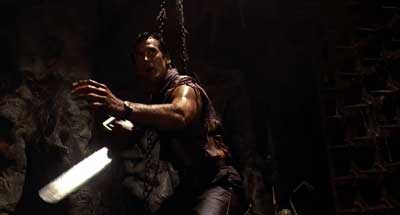 A car, in love with its owner, comes back to life and kills everyone who might come between her and her true love. LAME.

Now, I’ll admit that this movie has grown on me. And Hostel: Part II is an absolute masterpiece. But the first half of this movie is utter drivel. I know we need to identify with the main characters, and I know the sense of adventure backpacking across Europe, drugs, and sex is all well and good, but they are taken to the extreme in this film. Eli, you could have cut 30 minutes of drugs and nudity out of this movie and there would have been no problem.

I’ll sum up this movie for you: ”OH MY GOD! WHAT’S THAT NOISE?! THERE’S SOMETHING MOVING OVER THERE, EVEN THOUGH YOU CAN’T SEE IT! HELP!! HELP!!” Translation: not scary. The ending makes up for it, though. 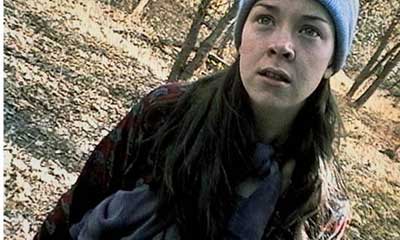 My love for Clive Barker is well known. He never fails to impress. This movie continues that tradition, as its excellence is almost poetic. Not to mention, Tony Todd is chilling. However, this film is the most scary when he’s around. The first third of this film, when we’re stuck with Virginia Madsen, is not scary at all. It’s more like a mystery, where we gather clues along with our main character, but we also have conversations with elitist PhD’s about whether urban legends have any use in our society. It’s meta-fiction, sure, but pales in comparison to the rest of the film.

Not scary, but I love it: “A naked American man stole my balloons!”

Larry Cohen, you’ve made some great films, and we love you for them. Rick Baker, you are a genius, and your work is always extraordinary. Having a murderous infant that kills you along with everyone else—although more slowly—is surely terrifying. But that baby is ridiculous-looking and not scary at all. 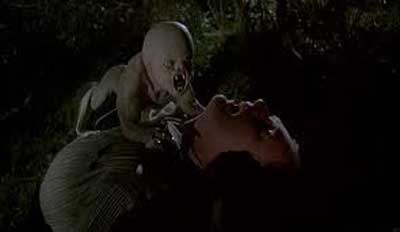 This is not even a horror film, because it’s not scary at all. I don’t know why it gets called horror. It’s just two hours of waiting for these two annoying characters to die.

Written by Stephen King and directed by George A. Romero—must be a slam-dunk. Not so fast. There are fantastic moments, especially the segment “Something to Tide you Over,” and “They’re Creeping Up on You,” but there are also moments where it falls flat. The most notable misstep, “The Lonesome Death of Jordy Verrill,” features Stephen King as our main character, who breaks a cardinal rule of horror and pokes at the meteor that has fallen from space and landed in his backyard. He then proceeds to sprout and his entire house is taken over by green moss-hair. Not scary, not even that campy. What’s not scary? The entire movie.

I love this movie. It’s more than a masterpiece, and possibly the best sequel ever. That said, a scientist—no matter how mad—would not sit down with the Frankenstein monster and have a cup of tea.