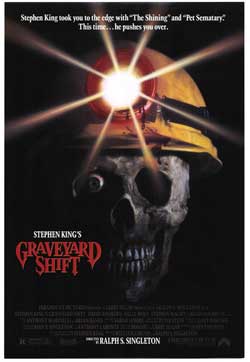 This Stephen King story will give you the willies! The manager of a textile mill attempts to tidy up after a fatal accident in his plant brings a safety crackdown. Some new graveyard shift workers are to rid the plant’s underground floors of rats. But what lurks beneath the floors isn’t just any rat’s nest — there’s one giant, man-eating rodent waiting for his midnight snack. …

My next review in my ongoing series of reviews of horror films based on short stories collected in Stephen King’s Night Shift concerns Graveyard Shift, a mediocre creature feature in which the workers of a slowly dying textile factory are pitted against a giant mutant rat-bat hybrid and its hundreds of rat servants. The biggest problems with this movie are the continuity errors and inconsistencies regarding characterization, especially that of the main human villain, Warwick (Stephen Macht) the supervisor of the mill.

Before the opening credits even begin to roll, we see a prologue, a man working the graveyard shift alone on the “picker”, a large machine featuring sinister iron combs used to process the cotton before the actual textile weaving begins. When the man sees rats begin to gathering together and stare at him, he picks one up and sadistically drops it into the picker and mutilates it. A few moments later the mill worker is attacked by an unknown flying creature.

The story then begins with the arrival of a drifter into a small town in Maine. This drifter, John Hall (David Andrews), immediately does what drifters do when they come into town: he goes to the nearest mill and looks for a job. It comes a no surprise that there is an opening on the graveyard shift for an experienced picker operator, and we quickly get the opportunity to see him resourcefully deal with the rats by means of his expertise with a sling shot. (He shoots empty Pepsi cans at the rats, an unusual example of product placement if there ever was one) When the textile factory is called unsafe by the safety inspector due to the disgusting conditions in the basement, the villainous Warwick bribes him to give him until the day after the July Fourth weekend to get the factory up to code and clean out the basement and thus avoid having the mill shut down.

By this time, “the Exterminator”, a man (played by Brad Dourif) who clearly enjoys his job, has already been working around the clock to empty out all the rats from the factory. Brad Douriff is one of those great formally trained genre actors whose passion never flags, whatever roll he plays, whether he is acting in a serious drama or a mediocre creature feature, and he is excellent as the somewhat demented but still sympathetic exterminator. His death in the cemetery outside the mill is one of the earliest scenes whose position in the movie is puzzling, as he is crushed by a headstone as Warwick listened to his screams. There is no way to tell whether he has been set up by the mill boss, or the screen writer just didn’t want him in the film’s climax.

The film then continues in a rather standard manner as the small town mill workers torment and bullies the trustworthy outsider John, more victims fall prey to the giant bat/rat, and John starts a relationship with his only female coworkers, Jane (Kelly Wolf). Finally, Warwick gathers the most financially desperate employees including John and his new girlfriend, and puts them to work on the July Fourth weekend cleaning up the filthy and rat ridden cellar. While going through thousands of discarded files, old furniture and broken machinery, not to mention hundreds of rats, John discovers a trap door which he guesses will lead to the rat’s nesting ground where they can destroy the problem at its source. As John, Jane, and Warwick run around in the underground Lovecraftian tunnels, and numerous co-workers are picked off one by one by the demonic rat/bat king Warwick seamlessly shifts from insane egomaniacal boss to decent guy and back again, before finally going nuts and trying to stab John with a shard of glass.

Where Graveyard Shift really succeeds is in the setting and art direction. The film makers used a decrepit old wool mill in Harmony, Maine, and the set is powerfully realistic. When the crew discovers the trap door that leading to the tunnels which also runs underneath the town, the movie reveals a place that is dramatic and truly creepy. The tunnels also lead to the local cemetery where John and Jane stumble onto a very elaborate mass grave of skeletons that would be perfect for a Hammer film with a much scarier premise than a giant killer bat/rat.

The rats in the film are distinctly different from Stephen King’s conception of the rats in his short story. The rats in Graveyard Shift the film had seemingly evolved into some kind of collective consciousness bent on randomly terrorizing outsiders and defending their home. The leader rat in the short story is the size of a small cow and acts as sort of a queen bee responsible for keeping the nest’s lifeblood pumping. In the film, the giant rat is actually a giant bat with some rat like features, most notably its giant tail. When finally revealed the monster has some scary features and gets in some pretty good kills, but I think that the best camp factor in the movie happens when the people running from the monster slip through a small enclosed area and the monster can only stick his head through. This is of course done so the filmmaker can use a smaller number of puppeteers to run the monster.

Like most of the films expanded from Stephen King’s short stories, Graveyard Shift doesn’t really succeed as well as the ones based on his novels and novellas, but if you want a mediocre creature feature to rag on, or you are Stephen King completionist, Graveyard Shift is decent enough.