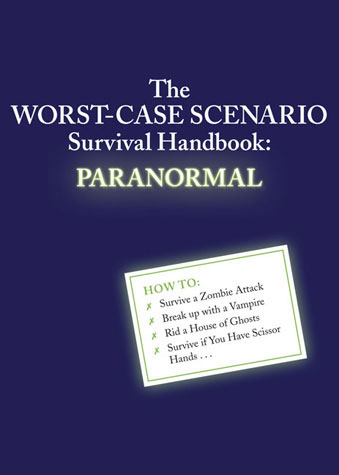 By David Borgenicht
and Ben Winters

This product has not yet been released. It will be available after Wednesday April 13, 2011.

On hit TV shows, in best-selling books, blockbuster films, video games, and comics, pop culture has been overrun by hordes of vampires, zombies, werewolves, ghosts, wizards, and other paranormal creatures. Luckily, the authors of the Worst-Case Scenario Survival Handbook series are back with all-new, expert advice designed to help readers fend off the furry, fanged, freaky, and frightful. This classic handbook format is packed with new illustrated instructions for crucial scenarios ranging from the domestic (How to Host a Cocktail Party When Your House is Haunted) to the scary (How to Survive a Zombie Attack in the First Day, First Week, and Long Term) to the practical (How to Break Up with a Vampire).

David Borgenicht is the creator and co-author of the Worst-Case Scenario Survival Handbook series and the publisher of Pride and Prejudice and Zombies. He lives in Philadelphia.

Ben Winters is the author of Sense and Sensibility and Sea Monsters, and co-author of several titles in the Worst-Case Scenario Survival Handbook series. He lives in Brooklyn, New York.