Last orders – The Haunting of The Old Red Lion, is a play that documents what paranormal events took place at The Old Red Lion pub in Islington, based on the first-hand experience of the crew. Taking place from the 8th – 26th October apart of The London Horror Festival.

This is an untraditional approach to your typical paranormal investigations or ghost hunts, the play was conjured from a month-long journey into the pubs history, with the help of current and former staffs frightening recollection of spirits, professional paranormal investigators and even a Seance – The Knock Knock Club have bandaged together it’s scary history with many regulars remaining the unfavourable guest they once were. The play will give the audience insight into what occurs behind those doors, long after the bell for last orders has been rung and the final punter has staggered home.

We caught up with them just before our viewing of the show this evening to ask where the bizarre idea of a Docu-Play came from and how the idea… Spirits were conjured up for the production.

Where did the idea of a Docu-Play come from?

We started with the aim of telling ghost stories based on true events that happened throughout history in the Old Red, but as soon as we began our research we realised the truth of this venue was more fascinating and terrifying than anything we could simply devise. We started by interviewing the staff past and present and after hearing their paranormal experiences we realised we had to conduct a ghost hunt ourselves. So we stayed overnight with Twilight Ghost Hunts and had some paranormal experiences of our own. Then we delved into the newspaper archives at the British Library linking the folklore we found with history, in Last Orders, we present our findings.

Do you think there is a growing love for horror plays?

We think that horror, like many other genres, once considered “cult” has moved much more into the mainstream recently. Horror theatre is visceral and immediate. With a horror play, there is no hiding under the covers, no pressing pause on the remote, it’s a rollercoaster of terror once it starts you just need to hang on.

How long have you had the idea to do events like this and what was the first venue that you looked at?

One venue we have considered is the Vaults near Waterloo due to it at one time being part of the London Necropolis Railway which was built to ferry corpses out of London to their resting place in Brookwood Cemetery after London had become overrun with the dead. It would be a perfect location for The Knock Knock Club but at that point, we had neglected to look at the 600-year-old venue that was right under our noses. We overheard one ghost story and as soon as we started asking around we learnt everyone who has worked there has a story. 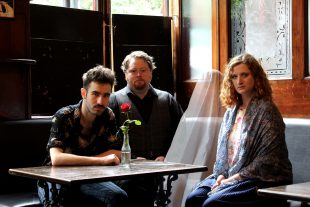 When did you first hear about the venue and its history?

We have been aware of The Old Red Lion for years, it is a staple in the London fringe theatre world. All three of us have performed at the theatre over the last few years. It’s such a unique space; you can feel its history and you only have to look at the front of the pub to see the date ‘1415’ carved into its stone, it’s old, over 600 years old. So many famous faces have been through its door including William Hogarth who even included the Old Red in one of his paintings ‘Evening’, George Orwell, Stalin and Lenin were even reported to have evaded arrest by hiding in the pubs dumb waiter.

Have you experienced anything supernatural during rehearsals?

There have been more than a few times we have had to stop rehearsals to listen to an odd noise, a lot of the phenomena reported at the pub has been auditory, but no in our rehearsals so far we haven’t experienced anything. The ghost hunt we did with Twilight Ghost Hunts was a very different story though, but you will have to come and see ‘Last Orders’ to find out what happened. The new Theatre Manager Alex Knotts experienced some ghostly whispers on his first day so maybe we have stirred something up?

What do you think it is about the supernatural that makes it appealing to you /  the audience?

Everyone has a supernatural story, if you haven’t experienced something personally then you know someone who has. We all have very different stances on whether ghosts exist. Christopher is our sceptic, he believes he has never experienced anything he can’t explain. Reece our believer grew up in a haunted house and has had many supernatural experiences. Caroline is unsure of her stance. Before we started our investigation she was closer to not believing but after the ghost hunt she is creeping towards being a believer. Are differing opinions has caused lots of interesting debates but one thing we can agree on is the history of the Old Red Lion is fascinating and we can’t wait to share the ghost stories of this reportedly haunted pub. 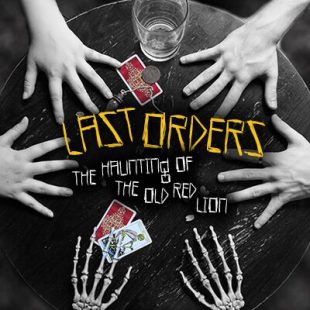