MIB III does some cast shuffling

Things from the MIB III camp have been pretty quiet for a while but today brings some interesting casting news. This one has been plagued with all kinds of production delays and because of that they lost what I felt was a genius piece of casting with Alec Baldwin being attached to the film. Because of his busy schedule he just couldn’t wait for thing to ramp up any longer and had to bow out. Left a pretty large hole in the cast but director Barry Sonnenfield seems to have fixed things. 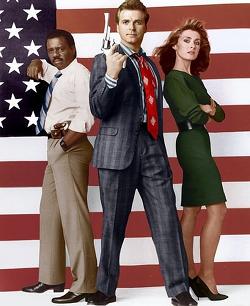 It has been announced that veteran character actor David Rasche has been recast in the role. Name don’t ring a bell to you? I’ve got one word for you “Sledgehammer”.

Know him now? C’mon, how can you not know SLEDGEHAMMER. Great show, great actor and a perfect replacement of Baldwin.

Although the film has had its problems since day one it is still looking for a summer 2012 release. Its got a winning cast with Will Smith, Tommy Lee Jones, Josh Brolin, Rip Torn, Emma Thompson, Gemma Arterton, Sharlto Copley, Betty White and Nicole Scherzinger all on board. Story line wise this is what we are told is the pitch:

In addition to Smith as Agent J, Tommy Lee Jones reprises his role as the wisecracking Agent K in the present (the part already shot). Josh Brolin, through a time-travel twist, plays a young Agent K from 1969 who encounters counter cultural figures such as Andy Warhol and Yoko Ono.

Rumor is that the script is being revised yet again so the drama around this one may be far from over. No word on when or even if cameras will roll but as soon as I hear, you’ll hear.