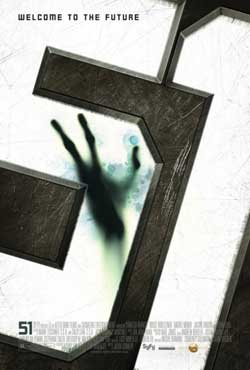 51 chronicles what happens after political pressure from the American public forces the Air Force to provide a few well-known reporters with limited access to the most secretive base on the planet: Area 51. When one of the base’s hidden ‘long term visitors’ exploits this unprecedented visit as a chance to liberate himself and his fellow alien captives, Area 51 turns from a secure government base to a horrifying destination of terror.

“Shoot first, make up why later.”

Area 51 is a ScyFy original movie…stop groaning some of these films can be really fun. Luckily Area 51 is just one of those great throwback creature feature films that I wish the ScyFy channel would make more of.

Area 51 starts off with a news report where the reporter is very excited reviling the news that the legendary Area 51 is now unlocking its doors and letting two local media celebrities inside so that they can tell the world its secrets and dispel all of the rumors of so called aliens.

The two celebrities that the military decides to let into the base are Sam Witacker, the stereotypical handsome news reporter and Clair Fallon who is a popular author and news blogger, Clair is the biggest threat in the military’s eyes.

Doesn’t just focus on the media celebrities who are in tow to report about the base and its exact functions. Different military figures are introduced including a one time war hero who was socially crushed by Clair Fallon and a young man who shot himself in the foot in order to avoid going into combat.

Area 51 soon does live up to its creature feature status however as some aliens are introduced. The only alien who is given real screen time at the beginning however is known only as Patient 0. Patient 0 is a morpher, which means if the alien touches you it can mimic your appearance, and even the phrases that it has heard you say. Patient 0 sits calmly in a room while repetitive techno music plays, it seems to keep the alien calm. Other aliens are introduced but not really given screen time until towards the end of the film and they have such names as Little Devil and Lady Death. 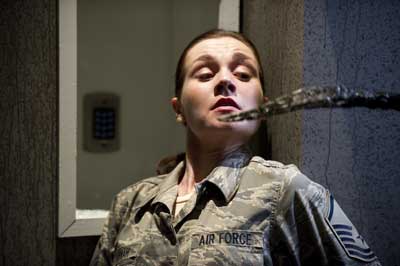 It is only a matter of time while Clair and Sam are in the compound that things begin to go very wrong. Patient 0 suddenly snaps and starts an uprising of the aliens. He frees Little Devil and Lady Death who begin to go on a rampage. The gore level in Area 51 is stepped up and actually pretty fun for a ScyFy movie, it was obviously a lot of fun to make. The aliens literally begin to rip the military men apart as they rage throughout the base. 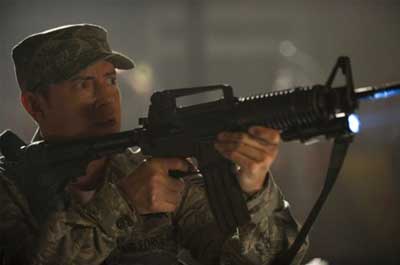 Area 51 does have the corny acting one would expect from one of these films yet it also has some other things under its slimy skin. There are several scenes that imply that the government can easily be spying on you with their satellite technology, and a scene involving a new weapon that is undergoing testing that is sure to cause a shudder to all of those who fear the prospect of war. Area 51 also goes several times into the whole POV vision style of film making that is being made popular by such films as Paranormal Activity and Rec. Area 51 also takes a nod at another classic film involving aliens with its own version of the infamous “test” sequence from The Thing. Even a friendly “Yoda” like alien is introduced who was supposedly one of the aliens from the infamous Roswell crash, this leads to a funny moment when Clair explains that “he looks exactly like that alien from the video”. (If you don’t know what I am talking about there and are watching a movie called Area 51 you really need to do some research.)

Go ahead and call all of your friends and get some cold ones and be ready for when this one comes on….its a lot of fun and I promise that you wont get messy.

51 is now available on DVD from Lionsgate