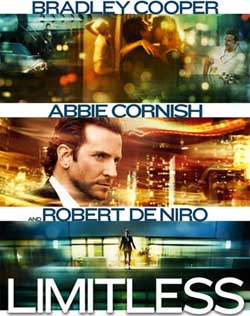 An action-thriller about a writer who takes an experimental drug that allows him to use 100 percent of his mind. As one man evolves into the perfect version of himself, forces more corrupt than he can imagine mark him for assassination. Out-of-work writer Eddie Morra’s (Cooper) rejection by girlfriend Lindy (Abbie Cornish) confirms his belief that he has zero future. That all vanishes the day an old friend introduces Eddie to MDT, a designer pharmaceutical that makes him laser focused and more confident than any man alive. Now on an MDT-fueled odyssey, everything Eddie’s read, heard or seen is instantly organized and available to him. As the former nobody rises to the top of the financial world, he draws the attention of business mogul Carl Van Loon (De Niro), who sees this enhanced version of Eddie as the tool to make billions. But brutal side effects jeopardize his meteoric ascent. With a dwindling stash and hit men who will eliminate him to get the MDT…

Limitless is a film that really touched base with some key interests of mine. Maybe it’s the Matrix effect or maybe it’s the puzzle of science that states we only posses a small capacity of our brain. This issue in itself opens up a world of interest and possibilities. Namely, these are key to what the film “Limitless” attempts to explore. Very simply, a pill is created that can expand a persons brain reach to full capacity, though it only lasts for 24 hours. What this entails is not just being smarter, but acutely aware of all the information you’ve ever taken in and what is being processed. So in essence, this ability just expands on our capabilities.

As we begin, our key character Eddie Morra played by Bradley Cooper is a struggling writer who doesn’t seem to have much ambition “besides” being a writer. His writing is constantly at a standstill due to a habit of writers block but his intentions are good. His world is crumbling, his girlfriend has left, and his environment and cash flow is severely to the point of one who is about to become a vagrant’s life. When he runs into an old acquaintance, he is given a small gift in the way of a pill that unlocks his brain potential to full capacity. In the process, he finishes his book in record time, begins to tune into subject matters like a savant and is able to approach everything with complete clarity.

This pill though created under a test pharmaceutical has some defects. Namely it is in so much demand that who ever possess any is at risk by those who desire it. This chain reactions as a whole mess of those who need the pill, and a new found ability that has Eddie soaring to the top of the ladders like a miracle over night. What is interesting is that almost like the matrix effect, Eddie is also able to recall moments to use to his advantage. Tv clips, old movies and training videos, give him abilities such as fighting skills on instant recall.

The film also features our key favorite Robert De Niro as the high roller Carl Van Loon. Carl is as top as it gets in his sector and becomes an instant fan of Eddie’s acuteness. Abbie Cornish plays Eddie love interest Lindy who seems to phase in and out of his life. Andrew Howard plays the token foreigner bad guy who also has an interest and use for Eddie’s magic pills.

In all, this is a great story and film that really takes on “this” subject with a fine premise and content that makes sense. The FX at times are brilliant and for what I could tell original in the use of camera shots, high res zoom-ins and fancy editing. You’ll know what I…. mean just on the into credits alone. One thing that wasn’t touched upon which made sense to me on retrospect was the stated fact that if we had full brain potential we would also achieve EPS, mind over matter and metaphysical characteristics. Now this statement is based on science rather than script potential, however this area was left out and I feel it was rightly so. If we had given Eddie extra-sensory abilities, the film would have gone the direction of sci-fi and other routes that I think the directors would have liked to avoid. So on that note, the exclusion was justified to not over complicate the script.

Neil Burger directed this fine piece who really doesn’t have a long laundry list of features. Though as a Spring favorite to me that lines up nicely against the recent “Adjustment Bureau”, this one’s a winner front to back. Advice here for readers is…..just go see this! Science and film rolled up into a perfect marriage of entertainment for all.