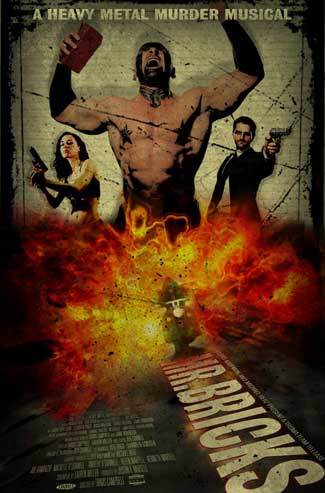 Every so often, Troma becomes involved with a unique film which we feel should be prominently showcased. We are proud to present our latest project, MR. BRICKS: A HEAVY METAL MURDER MUSICAL. Created by a new brilliant young director Travis Campbell and produced by visionary new producer Justin Martell, MR. BRICKS is destined to attract a major following among both film and music fans. While the film is in its final editing stages, it has already been invited to a number of film festivals and Troma is currently deciding which festival will present the world premiere.

“MR. BRICKS is a one-of-a-kind, original film,” says Troma President and Co-Founder Lloyd Kaufman, who also served as an executive producer on the film with partner Michael Herz. “Travis Campbell and Justin Martell will take their places along with James Gunn and Eli Roth in the movement of Troma’s Make Your Own Damn Movie! style of film making. They represent a new era of cinematic trailblazers who have started out as members of the Troma Team.”

MR. BRICKS introduces tattooed muscleman Tim Dax as Mr. Bricks, an ex-con left for dead in an empty New York City warehouse. Rocked by headaches caused by the bullet lodged in his brain, he pieces together memories – the barrel of a gun…his girl’s scream…and eventually, the face of the dirty cop (Vito Trigo, Dark Windows) who pulled the trigger! All he wants is to find his missing girl Scarlet (Nicola Fiore, Miss Cannibal Holocaust, Game Over), and vows to kill anyone who gets in his way…but what if Scarlet doesn’t want to be found? Love is murder in this bloody tale of lust, desire, and revenge. Like G. G. Allin meets The Rocky Horror Picture Show, MR. BRICKS will knock you out of your seat with nine head-banging musical numbers.

Established in 1974, Troma Entertainment is arguably the longest running American independent film studio, responsible for The Toxic Avenger and a score of classic films such as Tromeo and Juliet, Cannibal the Musical, Class of Nuke ’em High, and Poultrygeist: Night of the Chicken Dead. Among those whose early work is found in Troma movies are Trey Parker, James Gunn, Robert DeNiro, Samuel L. Jackson, Vincent D’Onofrio, Fergie, and Buddy Giovinazzo.