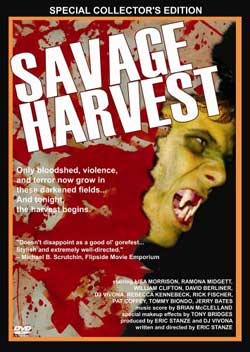 What was thought to be Indian folklore instead becomes all-too real as ancient demonic spirits turn six teens’ lakeside weekend into a blood-soaked battle for survival. It seems the land sits on a Cherokee burial ground, and the blood of one unwitting youngster rouses the evil demons — who begin to possess their human visitors. Ramona Midgett, Lisa Morrison and Rick Fischer star in this gory indie fright-fest helmed by Eric Stanze.

I keep going back to this when a film I’m reviewing stirs a memory in me of days that have long past. The days of going in to a video store, NOT Blockbuster, or Hollywood Video, but the local ma and pa store that I practically lived in. I’m going to write an article on that soon but for now I will focus on “Savage Harvest”. I mentioned the old days mainly because this is the type of film you would find in an oversized box released by someone like Wizard, or Lightning, the companies that picked up just about any low budget horror film they could get their hands on. The film, released in 1994, has that appeal. While it is far from being great, I had a few beers and watched it late at night and had a good time. A group of friends head out to the woods to camp, I think, and help do some work for family learn of a Cherokee legend of demon coming to our world and possessing humans in order to take back the land they once ruled.

Our friends are one by one turned to demons and begin to off one another while the remaining friends try to undo what has been done. The plot of this film was a bit boring and convoluted.

It served the purpose, but for me, the explanation of the Cherokee legends went on for far too long and were told in an uninteresting manner. The subplots were stale and the acting was wooden. At one point I was ready to shut the film off when something happened. The first demon appeared and we get our first glimpse of some blood. And you know what? The effects were awesome. The demons looked cool and the nasty stuff was incredibly well done, especially on such a small budget. This was writer/director Eric Stanze’s first film, it shows, but it also shows promise that over time he may have an interesting career. I, for one, would like to see him go back now and remake his own film and I would be willing to bet that he hits it out of the park.

There are some amateurish mistakes but being a first time director that is expected. The film was shot on video, which for some reason, reminded me of the Tim Ritter films like “Truth or Dare” which were always fun to watch. The camera work and photography were done well enough that you forget about it. Some of the wardrobe was pretty laughable and budget limitations show. When watching low budget films you can tell if the filmmakers are talentless and wasting time or talented and learning as they go. Mr. Stanze is the latter.

His bio shows that he has been working continuously since completing the film and I would be interested in seeing how he has progressed. In 2006 a sequel was released but the film was written and directed by Jason Christ and Stanze taking on the role of executive producer.

“Savage Harvest” was a fun film, without question. It is the type of film where you can sit around with a few friends, throw back a bit a booze, and have a good time with. There were mistakes made but it just shows a first time director trying to learn his craft. I hope he has since learned from his mistakes because there is serious potential in what I saw. The splatter effects were outstanding. I was expecting much less and was pleasantly surprised to see that they looked so great. Lets face it, with films like these, the effects are the stars. With the first half of the film dragging on, it is definitely worth your while to hang in there and bask in the gorey of some seriously nice effects work. This film is a perfect example of why the late 80’s and early 90’s have yet to be rivaled in the sheer fun of horror and gore.