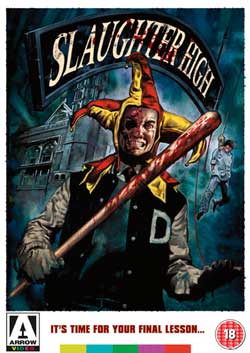 Five years ago a group of students played several April Fools Day jokes on young Marty; the last joke went horribly bad. Now it’s the five year class reunion, but the school is abandoned and then there’s that crazy guy running around in a jester mask knocking off the alumni who have returned. Is Marty taking his revenge on his former classmates, or is this another April Fools Day joke.

“Marty was the dork of Doddsville High. One day he got mad… then he got even!”

I remember when I was a young gore hound I would get excited whenever horror movie trailers came onto television. It was one of the only times I would ever sit still and be quiet and just watch, I grew up in a very open minded household so a lot of times I was allowed to go with my cousins to see these movies. One trailer though always stayed in my mind, honestly I don’t know why. The trailer was for the film Slaughter High, for years the image of the black and white picture of school nerd Marty smiling at the camera and then getting punched through by massive hands and arms always stayed with me. It wasn’t even until high school that I learned what the title of the movie was; I only had that image imprinted in my head.

There are some interesting facts about the movie; the first is that the original title was supposed to be April Fools Day the title was changed when it was found another film with that title was in production. The film was released on video by Vestron which means it was in almost every mom and pop video store across the country. Slaughter High was also filmed in England with its actors pretending to be Americans, they didn’t take into consideration that here in America April Fools Day is an all day event, it doesn’t end at noon. The star of the film Simon Scuddamore who plays the poor soul Marty also has a tragic story about him; apparently he committed suicide not to long after the film was released.

Slaughter High starts off by taking us back to those wonderful days of high school. School nerd Marty is being lead by 80’s bombshell Carol into the girl’s locker room for a bit of premarital sex (it wouldn’t be a slasher movie if we didn’t have it now would it?). Marty is stumbling all over himself but he assures her that he has had sex before, and he’s pretty good at it too. Carol tricks Marty into going into the shower while their other classmates make their way into the girls locker room armed with cameras and a javelin!??! High School can seem so brutal sometimes. While Carol sweet talks Marty he notices that someone has wrote “Marty Rantzen sucks!” on the wall. Marty quickly changes the S to an F therefore changing the message to say “Marty Rantzen Fucks!” that will teach em kiddo.

It’s only a matter of a few minutes before Marty has stripped off all of his clothing and proclaims “Here’s Marty!” before throwing open the shower door. He suddenly realizes his error when he is standing buck naked in front of his laughing classmates who are either taking pictures of him, stabbing at him with the javelin, or yelling “Where’s the beef?” yeah this movie is kind of dated.

The pranks continue on the poor guy. In the span of a few minutes we are treated to seeing Marty get a swirlee, smoke a joint laced with poison and the final nail in the poor guys coffin a container of acid falls on his face disfiguring him, once again in front of the whole class.

Five years later eight of the students are returning to Doddsville High for their five year class reunion; don’t ask me who has a five year reunion or why only eight of the students are here when there are obviously way more than eight in all of the earlier sequences. Carol is of course one of the students who has come back. As they get to their former school they discover that it’s abandoned and obviously hasn’t been used for some time, that doesn’t stop the janitor from still hanging out around there though, well he’s a grounds keeper now, doesn’t matter though cause the fella gets to be the first real victim of the movie.

The alumni finally make it to a room where someone has placed each of their lockers. Inside each of their lockers is something from their high school days, these items range from a pair of dirty smelly shoes, to a pair of gloves lost on prom night (it wasn’t the only thing she lost that night according to her classmates). Marty’s locker is also in there, but Marty isn’t part of the group that is there now. Inside of his locker they find his yearbook and as they flip through the pages they are told about the fate of poor Marty. They are told how Marty went insane because of his disfigurement and broke out of the insane asylum. The bad news is, this April Fools joke is about to be pretty brutal. The good news is obviously on April Fools Day here the pranking stops at noon.

Slaughter High isn’t too terribly bad, again it’s from the golden age of the 1980’s when slasher films were all the rage. You have all of your ingredients for a decent slasher film, eight stereotypical high school kids (the jock, the stoner, the slut, the prom queen etc). There are a few scenes of nudity, and a sex scene and a bath scene (though I have to admit I was questioning the victim’s judgment when after seeing various members of their graduating class die they decide to take baths or have sex). Marty as the killer is also shown wearing a jester mask, that was worn by one of his classmates during the shower hazing scene mentioned above.

Let’s talk about the death scenes though, that’s why we love these movies so much. There are some pretty good kills in this movie involving a hatchet to the face and impalement on a coat hook. There is a lawn mower death scene, which is decent but not as great as it sounds. The two best deaths in Slaughter High in my opinion are the “acid bath” death sequence in which we get to see some really groovy stop motion FX and another gory segment involving a victim drinking a poisoned can of beer which causes his intestines to start growing until they pop out of the front of his shirt! Never mind how the poison got into the beer, this scene is great.

Like I said earlier Slaughter High is a product of the 80’s slasher wave, kinda in the middle of it. Even the beloved Jason from Friday the 13th part 3 gets paid homage to when one of the characters jumps out to scare another one while wearing a hockey mask. I will state though that there is a twist at the end but right before the twist there is a moment where if you are a big fan of the slasher genre you suddenly sit up and say “No @!$& way! They really did that.”

So let’s go back to the days where we let cover art on vhs boxes decide what movie we took home that night. Give Slaughter High and chance and maybe you will think twice before you start teasing that really strange guy at work. 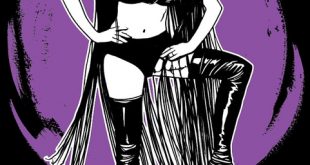