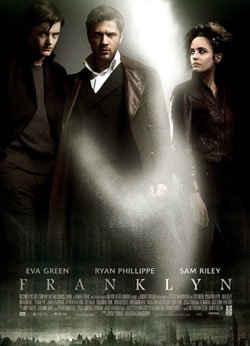 In the futuristic Meanwhile City, a masked vigilante (Ryan Phillippe) seeks out his nemesis while in contemporary London, an art student (Eva Green) attempts to kill herself, a heartbroken lover (Sam Riley) looks for someone new and a father (Bernard Hill) searches for his son. Writer-director Gerald McMorrow’s sci-fi drama follows these desperate individuals as their lives become intertwined by fate.

It starts out with a man that looks like a Jack Skellington from The Nightmare Before Xmas lookalike- well from the mask he is wearing. His name is Jonathan Preest and he is some sort of a vigilante. He is the only one in a futuristic London that isn’t absorbed in some sort of kooky religion. The ministry has a seething grip on their society and dictates everything they do. The cops in Franklyn reminded me of the oompa loompa’s from the scene in Willy Wonka where they shrink the chocolate bar and Mike TV with the get ups they were wearing in that part of the film.

Emilia is an attractive art student who is working on a project and gets to kill herself once a month with out actually dying. She loves it because it pisses her estranged mother off. You watch a scene with the two of them at the shrinks office and the hatred between them is clearly evident. There seems to be a long history of their abuse towards each other and there is no way in hell they will ever have some sort of civil relationship. I know what it’s like to dislike your mom, trust me on that one!

Milo seems to be a lost soul who spends most of his time following his old childhood sweetheart Sally around town. Why does he do this? Will he ever even speak to her? Is he some sort of stalker? You can’t help but wonder what the purpose of this all is. Is he still in love with her? Does he want to try and reestablish what was once between them? Milo seems to be almost obsessed with this red headed beauty. He finally gets a small conversation and he begs for a night out of at least buying her a drink.

If I honestly had to sit here and tell you what exactly this film was about or what it meant, I don’t really think I could. It is interesting yet strange. The backdrop for the city is very Gothic and amazing and at times it almost reminds me of something out of a comic book, somewhere a super hero should reside. Preest is eventually captured and put away for four years in a dingy prison. When he gets out, the council wants him to work for them. They take him to the medic who is supposed to put a tracking device in him so they will never lose track of him, if he’s on their clock it must be done.

He kicks the cops asses and manages to escape from their grips. He is ready to avenge the death of a little girl named Sara that he was supposed to keep safe but somehow he just couldn’t. He seems to blame God saying he failed him and let her die. Emilia is still killing herself in different ways with each one getting more extreme then the other. Her art teacher is disgusted and wants her to go back to another project that she was working on and be done with this death trip she is fascinated with. Why can’t she just be your average eclectic art student who is brooding and mopey without the death wish?

If you take a really good look at Sally the redhead she looks almost identical to Emilia. When Sally finally meets Milo at the restaurant for a drink, you learn of who she really is and why she is a part of his life. She isn’t just a coincidence anymore she’s now defined. She is there for a specific reason and you see that Milo is a freakin weirdo that seems to need a crutch to get thru life and he will take it in any way shape or form. Milo has a very crafty mind that likes to play tricks on him. In the end will he find someone to care about and love him back? Franklyn is not for everyone and I didn’t really think it should be categorized as a horror film either. 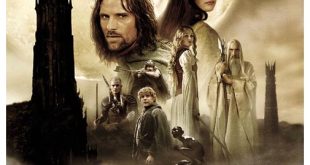