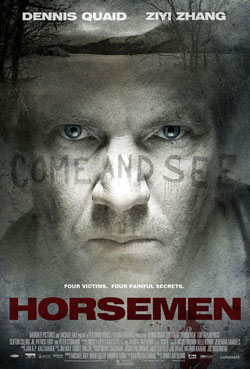 Aidan Breslin is a bitter detective emotionally distanced from his two young sons following the untimely death of his devoted wife. While investigating a series of murders of rare violence, he discovers a terrifying link between himself and the suspects in a chain of murders that seem to be based on the Biblical prophecies concerning the Four Horsemen of the Apocalypse: War, Famine, Pestilence, and Death

The Horsemen combines an action thriller with apocalyptic brutality into a frightening display of fanatical follow throughs and cold perseverence.

Set in a cold chill type of story that slightly mirrors hints of “Seven” in a revelation-gone-wild sort of way, Dennis Quaid gives a great performance as Aiden J. Breslyn, a dedicated overworked detective who specializes in forensic Odontology. Which in essence is the study of crime through teeth (Forensic dentistry). As a widower left with 2 sons Alex and Sean, he has a hard time really making a commitment to them in the sense of a normal relationship. From his tendency to obsess and overwork, he loses sight of his children and the importance of a relationship with them. Whether it’s due to the death of his wife Karen that has anything to do with it, Aiden prefers to focus on his career in detective work over having a normal home life.

In a recent criminal investigation that involves a plate full of teeth and some bizarre acts of fetish suspension that resulted in murders, Breslyn is hot on the trail with a hand full of leads and some criminal forensic insight.

With the cryptic message of “Come and See”, it doesn’t take him too long to track down its meaning into a prophetic act of the coming of the 4 horsemen. I’ve included a portion of it here for readers that aren’t familiar with the passage:

Revelation 6:1 – 6:2 – “…When the Lamb had opened the first of the seven seals, I heard the first of the four beasts say with a thundering voice, Come and see. And I beheld, and lo a white horse; and he that sat on him had a bow: and there was given unto him a crown, and he departed as conqueror and to conquest.”

While the mention of this old age biblical tale suggests supernatural , this film isn’t really so much about that particular take on the phrase. In that sense there is alot of misdirection into what to expect as a viewer. The clues are intriguing and planned to the effect of a great ride of film. While I don’t think it will spoil the plot, we do get a few surprises along the way. In the scheme of things Breslynn has figured out that the 4 horsemen will commit a total of 4 sacrifices in the service of the prophecy. Of course, time is of the essence.

The visual nature involves various means of body suspension in relation to the interpretation of the passage. It also influences a bit of role playing as 4 assume the positions of the horsemen. As Breslynn mentions “it is building to something” we are expecting to see as they put it….”initiating hell on earth”. At this point in the film, I thought I had it tagged as an “End of Days” type film, though again misdirection can be deceiving . My guess is the film “could” have went in that direction but it wasn’t the filmmakers and writers intentions.

Patrick Fuget makes an appearance but his role is pretty short lived. Though a nice balance of wimp vs psycho for his grand finale.

I can’t say that the resolution was what I was hoping for but alot of it amounts to a different message than what you were expecting. I enjoyed the film as a package and thought it had a clever use of clues to verses scenarios. It also had its gory moments, but only in a the sense that you’d expect from a crime film.

At the end of the day, the movie was more about message than the action ride, and for that it adds elements that veer from the norm. I think a film like this will gain a mix of responses. Its brutality scenes make turn off viewers who are expecting to ride it thru as a thriller, and the horror fans will lose site in the outcome. Though that doesn’t mean it’s not a impressive edge of set effort. With that which is a letdown there is equally as much in this film that will keep one entertained and “building” up to something.

POSTER RELEASE: Jonas Åkerlund’s LORDS OF CHAOS | Releasing in the US