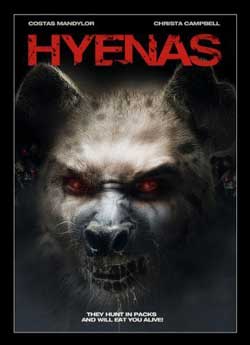 Deep in the forests of Bisbee, AZ, there is a roving clan of shape-shifting creatures that prowl and hunt for human prey. Unfortunately for their existence they have devoured the family of a man who, with the help of a veteran tracker of their kind, will bring the hunt to them.

“”Hyenas” the movie is an urban legend detailing accounts of human encounters and attacks by a sub-culture of predatory cryptohuman Hyenas. These shape-shifting human-like creatures prowl the rural back roads and forests of North America and have long been thought to exist by Cryptozoologists. Folklore and sightings persist even as mainstream science denies their existence. But these fierce creatures with bone crushing jaws and an appetite for human flesh are real and live up to the fierce reputation of their cousin, the African Spotted Hyena. A dozen snarling, fighting crypto Hyenas can devour an adult human — skeleton and flesh — in a matter of minutes.”

That’s a good start, to be sure. Unfortunately, Hyenas misses virtually every mark available to it from that point on. 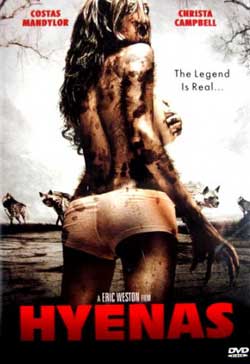 Hyenas wants to be a lot of things. It wants to be innovative by daring to shake up the lycanthrope genre with the obvious change indicated by its title. It wants to take a page from “The Lost Boys” and present a nomadic tribe of these creatures who genuinely enjoy being were-hyenas, sadistically getting their own thrill in the chase itself. But then, out of nowhere, it wants to be “West Side Story”, introducing a Jets/Sharks like rivalry between two local gangs(?), one a group of teenage Caucasians, the other a group of twenty-something to forty-something Hispanics neither of which seemingly have anything to do with the actual storyline of the movie. That’s right, though you’d think that one of these groups just HAS to be the were-hyena tribe, neither of them are. They’re apparently just there to precipitate a forbidden romance that also has no pertinent story ramifications. The only thing missing with this storyline was fierce downward snapping and saucy effeminate dancing. On a side note, it was surprising to me that the most disturbing part of this movie was the racial slurs exchanged between these two groups of people. Since their story had virtually no significance to the movie’s plot, I found it unnecessary and distasteful to watch these actors struggle to portray the ignorance of racism and the hate and violence it generates. If their plight would have influenced the storyline, even in the slightest, I might have felt differently.

And speaking of the acting, I never expect Academy Award winning performances from my horror movies; all I look for is sincerity and believability, and it does show up in this movie, albeit in chunks (no pun intended). Costas Mandylor, (Det. Mark Hoffman from five of the seven “Saw” flicks, owner of a perpetually pouty mouth and the coolest stage name ever) does as good a job as he did in the Saw movies, but he wasn’t given much to work with script-wise. Nor was his partner throughout the movie, Meshach Taylor (Designing Women, no sh*t). Christa Campbell, who will undoubtedly continue to be cast in these movies because of her astounding “talents”, did what she was asked to do I’m sure. Take that however you’d like. Truly, believe it or not, the best performance was not among these veterans but by Andrew James Allen who played a confused teen falling prey to the snipe prank from “Up”. This, too, had no relevance on the movie, by the way. 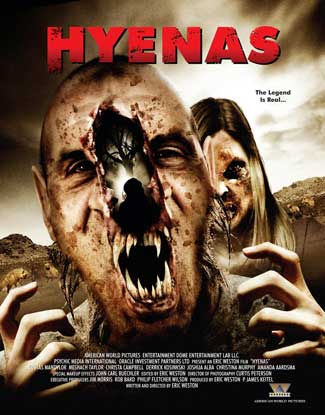 Lastly, the effects on the movie are a crash and burn. I’m pretty sure they superimposed old Mutual of Omaha footage of hyenas on a woodland background in one scene. The CGI is really unforgivable in this day and age. They might have been better served to utilize hand constructed models a la “American Werewolf in London”. The prosthetics appeared to be bought in bulk from ScreamTeam.com, the manufacturer of high quality, commercial latex appliances; which begs the question of whether this aspect of the film’s production was a budgetary or creative constraint. Either way it could’ve been better. 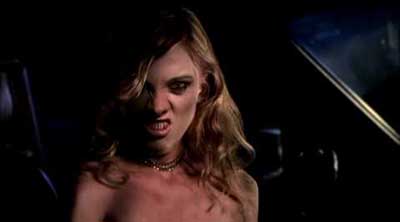