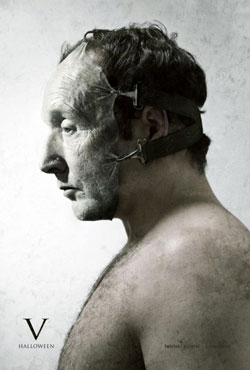 When Hoffman (Costas Mandylor) learns that his secret connection to Jigsaw (Tobin Bell) will be exposed, the forensics detective embarks on a hunt to eradicate everything that links him to the serial killer in the fifth installment of the grisly horror series. Jigsaw’s legacy of torturous traps lives on and director David Hackl remains at the helm in this gruesome continuation of the franchise. Julie Benz and Scott Patterson co-star.

Well, another year and you had to expect it: Another Saw movie. To say you didn’t see it coming, you’d have to be living under a rock or something like that. MTV kids, preppy teenage girls who like to get scared and grossed out, and hardcore gore fans will inevitably flock to the theaters and pay their hard-earned cash just to see a movie with the “Saw” prefix in the title. And ever since Saw II it’s been happening like that (Not to say I didn’t like that movie, just an expression), and forever will until Saw 56 gets released in the distant future.

Now let’s go back and look at the previous Saw movies:
SAW: It was a very different movie for me, yet in a good way. It had a very good story, some great acting and a twist that you couldn’t see coming. Plus the villain was just pure evil, I loved it.

SAW II: I loved this one just as much as the first. It had more blood but was still pretty tame, and yet it worked as a really good thriller. You can’t deny the best scenes were Jigsaw’s and Eric Matthews’ conversations- the way they were played out and acted was really brilliant and I LOVED the chemistry between the two characters. It was like they admired each other but hated each other at the same time. And yet the traps were clever and brilliantly played out- it added to the suspense-thriller feel. SAW III: The goriest one, but my favorite. It was really fast paced and had some of the best acting in a horror movie. And 3 great twists at the end! SAW IV Very unnecessary, but OK nonetheless. Yes it was a tad lame, but it had its moments.

And now we’re at Saw V, scraping the bottom of the barrel and digging a hole in the ground. After my dad and I saw Saw III in the theater, I never thought the Saw movies would become another Freddy Vs. Jason thing, but it did now. Like I mentioned before, Saw IV had its moments, but this one stinks so much it makes Saw IV look Oscar-worthy. It literally took me an hour to think up a single word of how awful this was since it was so bad. At the screening I was at, people were looking around at each other with “What the hell was that?” facial expressions. Some were even calling their friends up to tell them how bad it was. You really can’t blame them, though. If I had my cell phone on me at the screening, I would have been doing the same thing in the walk to the car.

So it begins with some useless sap we can’t feel any sympathy for chained to a table. After the Jiggy video, a swinging pendulum drops low enough just to touch his body, and he must crush his hands in order to get out. And he gets sliced in half by the swinging pendulum of doom. Then we go to Strahm, who’s been trapped in the sick room. He finds all sorts of crazy stuff and then gets put in a trap, involving his head in a glass box of water by Hoffman. He stabs a pen into his neck to breathe, causing him to sound like Jimbo from South Park throughout the rest of the movie. Then we go to some group of 5 people trapped in a house, where they think they have to kill each other to get out. One gets decapitated by the necktie trap. Some traps include the “Exploding room trap” where they have to smash glass jars to get the keys, the bathtub trap where one has to be electrocuted, etc. Then we suffer through a never-ending stream of flashbacks, because the entire ending is one. To what we already saw. About an hour and a half ago. But, like Saw I-IV, with a twist! A stupid one, this time.

That’s pretty much all you needed to know. The tagline is “You won’t believe how it ends”, but what I can’t believe is that the series has NO end. Really, the series should have ended at III. Now they’re really trying to strike the iron while it’s still hot. I’m sure the ultra super Director’s Cut with the holographic cover and a ticket to Saw VI will no doubt showcase all of the movie’s alternate endings, but at this point, I’m not sure if I care. And to the guy who started it: STOP THIS MADNESS NOW!!!!!! You started the series, you can properly end it. Or better yet- should have properly ended it after 3. But really, will it stop if we say we learned our lesson already?

So overall, this is a waste of time and money. Really, I guess the tagline should be “You won’t believe you just wasted your money”, because I sure couldn’t. Since this movie really stretched my patience and there were no other good horror movies, (I already saw Quarantine, good movie), I felt tempted a lot to walk out and go see Passchendaele again instead.