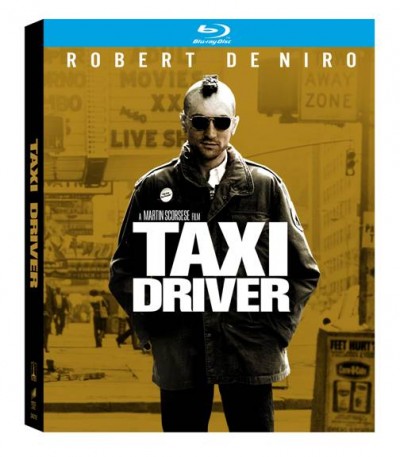 The Taxi Driver 35th Anniversary Edition has been newly remastered following an extensive 4K digital restoration from the original camera negative, approved by cinematographer Michael Chapman and director Martin Scorsese. The film arrives on Blu-ray packed with bonus material, including an all-new interactive “Script to Screen” feature, MovieIQ+Sync, and Martin Scorsese’s original 1986 commentary with Paul Schrader, as well as documentaries and animated photo galleries. The Taxi Driver 35th Anniversary Edition Blu-ray Disc will be available for the suggested retail price of $24.95.

Interactive “Script to Screen” feature, exclusive to Blu-ray. Explore the Taxi Driver script like never before in this interactive experience. The script will automatically scroll as the film plays so you can read along and discover the stage direction notes along with differences from the original script to the finished film.
Original 1986 Commentary with Director Martin Scorsese and Writer Paul Schrader recored by The Criterion Collection
“Martin Scorsese on Taxi Driver” featurette
“Producing Taxi Driver,” a behind-the-scenes featurette
“Influence and Appreciation” – Robert De Niro, Oliver Stone, Roger Corman and others pay tribute to Scorsese and the film in this video homage
“God’s Lonely Man” – a documentary featuring screenwriter Paul Schrader and Professor Robert Kolker discussing the loneliness themes as seen in the film. Schrader also talks about what circumstances lead to writing the screenplay
“Travis’ New York Locations” – a contemporary, video visit to the film’s famous locations in New York City, comparing them to the same locations used in 1975
Video bonus: “Storyboard to Film Comparisons,” with a Martin Scorsese Introduction
Commentaries by writer Paul Schrader and professor Robert Kolker, discussing the film scene-by-scene
“Taxi Driver Stories” featurette—taxi tales as told by real life New York city cab drivers
“Making Of Taxi Driver” Documentary
Animated Photo Galleries that include photo montages featuring the film’s music score, location shots taken during filming and Martin Scorsese at work
The Taxi Driver 35th anniversary edition also features movieIQ+sync, which gives you the full movieIQ experience on your computer or iPhone by linking to your Blu-ray Disc. Once connected, movieIQ+sync will display all of the great information movieIQ offers on your computer screen or iPhone instead of onscreen, all while staying synchronized to the movie!
Trailers

At 26, Vietnam veteran Travis Bickle (De Niro) is slipping slowly into isolation and violence on the streets of New York City. Trying to solve his insomnia by driving a yellow cab on the night shift, he grows increasingly disgusted by the people who hang out at night: “Someday a real rain will come and wash all the scum off the streets.” His touching attempts to woo Betsy (Cybill Shepherd), a Senator’s campaign worker, turn sour when he takes her to a p*rn movie on their first date. He even fails in his attempt to persuade child prostitute Iris (Jodie Foster) to desert her pimp, Sport (Harvey Keitel), and return to her parents and school. Driven to the edge by powerlessness, he buys four handguns and sets out to assassinate the Senator, heading for the infamy of a “lone crazed gunman.”

Taxi Driver 35th Anniversary Blu-ray Disc has a runtime of 114 minutes and is rated R.

Artwork and digital clips are available for download at www.sphepublicity.com. Visit Sony Home Entertainment Pictures on the Web at www.SonyPictures.com.

Academy Award®” and “Oscar®” are the registered trademarks and service marks of the Academy of Motion Picture Arts and Sciences.

The Blu-ray Disc version of Taxi Driver is BD-Live™ enabled, allowing users to get connected and go beyond the disc via an Internet-connected Blu-ray player. Download exclusive content, register for rewards, give feedback through our survey and more!

Get rewarded for registering your Sony Blu-ray Discs! The Sony Pictures Blu-ray Club rewards consumers in the U.S. for purchasing and registering BD-Live enabled Sony Blu-ray movies. Members can redeem accumulated points for cool Sony products, plus enter to win cash and prizes in daily sweepstakes and more. For details visit www.sonyrewards.com/bluray