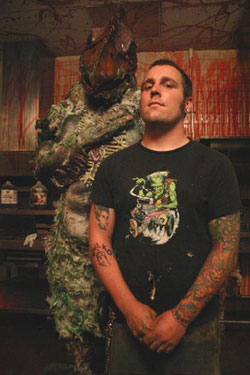 Good evening my bloody good flesh eating fiends and corpse grinders, today i bring you a man who is a true Fx fanatic and absolutely loves creature features and Troma films, as does yours truly. His name is Tom Devlin and he owns and operates 1313FX studios and he’s done make-up/Prosthetics Fx for such films as Ed Gein: The Butcher of Plainfeild, Freakshow, Poultrygeist: Night of the chicken Dead,Punch,Joshua,ZMD: Zombies of Mass Destruction, among other ones on his impressive gorie resume! :) Lets get this a ROLLIN!

Dr. Gorehound: Lets reverse back in time to when you first got into the make-up/prosthetics/visual effects career, and what fascinates you about this particular field?

Tom Devlin: Well I grew up loving monsters and It probably started with He-Man and the crazy characters that surrounded him like Beast Man, Skeletor, Trap Jaw and so on , I was a kid in the 80’s and I wasn’t allowed to watch any R rated films so I would get stuff like Gremlins, Critters, Star Wars, The Last Starfighter and any thing with creatures in it from the video store my mom worked at. Then I purchased my first vhs tape which was Teenaged Mutant Ninja Turtles: The MOVIE! That changed everything because “TMNT” was my favorite and I was convinced the turtles were real in the early 90’s. I segued from “TMNT” to THE TOXIC CRUSADERS, and they were grosser and slimy and way cooler on my 11th birthday, and I also had a Toxie themed birthday and my favorite Uncle let me in on a secret…that there was a Toxic Crusaders Movie! I didn’t believe it how would that slip by me, then he handed over The Toxic Avenger and distracted my parents for an hour or two. WOW it blew my mind a monster who was a hero! so then I was hooked on Horror and snuck it every chance I could, but it wasn’t till Friday the 13th part 4 which I saw at Mike Fishers 14th birthday party that I knew that was what I wanted to do with my life. Watching Tommy Jarvis (Corey Feldman) defeat Jason by using make-up fx skills set my life goal in motion I was going to make monsters and that was that…wow way out of subject! lol I am Fascinated by the transformation process, and I love to create a make-up or prosthetic piece that completely changes an actor into a completely different being.

Dr. Gorehound: What studio do you work/own now and what separates it from other Fx studios like KNB or DRAC Studios?

Tom Devlin: I Own and Operate 1313fx studios and we have a smaller crew then KNB or Drac, but we aspire to reach their popularity. I would compare 1313fx closer to Almost Human in that we are the next generation of Make-up FX guys as much as KNB was to Stan Winston or Rick Baker we are to them.

Dr. Gorehound: What type of special Fx/make-up do you master in the most, and do you do a mixture of everything..like what?

Tom Devlin: I pride myself in making lower budget movies look as if they have alot of money, that being said I have to mix it up. I prefer prosthetic make-ups and creature creation, but when the funds aren’t there I will pull out the air brush and go to town with killer body make-up to get the look that’s needed.

Dr. Gorehound: What type of gorie dismemberments have you created recently that left others in shock?

Tom Devlin: I ripped off a mans penis which gushed out blood as the man threw up, and then raped his wife with the severed member! That has gotten some reactions! lol

Dr. Gorehound: How was it like working on the set of Poultrygeist: Night of the Chicken Dead? Did you do the mutant chicken outfits and gorie stuff?

Tom Devlin: Talk about Old school monster suits…I made the General Chicken Monster out of Latex and Polyfoam ( just like the Hideous Sun Demon) yes I did the Key Chicken monster suits like the Lloyd Chicken, Carl jr, Micky, and the General Monster suit as well as some of the Key Deaths.

Dr. Gorehound: How was it like working with Lloyd Kaufman, and do you admire his work like The Toxic Avenger and Class of Nuk Em High?

Tom Devlin: I have been a Troma fan forever, and working with Lloyd was a great experience! Also becoming part of the Troma family was amazing!

Dr. Gorehound: I seen the trailer for your fx work in FREAKSHOW, and the mutants/sideshow freaks are scary. What type of materials did you use to create such ugly inbred monsters?

Tom Devlin: Well the Elephant Man was made with Silicone and it reads much more realistic on HD as was the Mongoloid girl. I did layer of hair on the wolf boy over his whole face right up to his eyelids and worm girl was a foam latex puppet.

Dr. Gorehound: There’s alot of resemblance of Todd Browning’s 1930’s classic FREAKS in FREAKSHOW, so was that done on purpose? The original FREAKS has real deformed freaks in it, does your version have some real Freaks in it to..or just practical ones?

Dr. Gorehound: How was it like working with Stuntman Kane Hodder on Ed Gein: The Butcher of Plainfield? What efx did you do in that film?

Tom Devlin: Kane Hodder was a great actor to work with that I had gotten my picture taken with him when I was 15 and when I showed him it he insisted on recreating the picture, but on set instead of the convention center…that made my day! I also got to work with Michael Berryman on that one to who is an amazing actor! I made a dummy of Michael that got dragged behind a truck and I did some gore gags like a broken leg and a girl hanging from hooks, but by far the best was getting a shot at re-creating Ed Geins legendary flesh suit which Kane wore! :)

Dr. Gorehound: Are there any Fx legends that you admire that paved the way for you to do what you love?

Dr. Gorehound: Have you directed any film work for the horror genre?

Tom Devlin: I have produced 3 films and currently producing two as we speek so that makes 5. I am also in production on my directorial debut “HELLO MY NAME IS GACY” a dark comedy staring John (Poultrygeist) Karyus as maniacal John Wayne Gacy.

Dr. Gorehound: Tell us what can we expect in such films as Devil Girl and Punch in terms of gorie deaths?

Tom Devlin: I’m not too sure with Devil Girl I just created the prosthetics for the film, and I was not on set and have not seen it yet….But Punch Is a whole other story like the gore is plentiful in particular a scene where a nerd has pierced his bully with 12 or so kitchen knives and rips them out one at a time!

Dr. Gorehound: What is the status on the film “Lo”? what is it about?

Tom Devlin: I wish I knew what the status with Lo was I think its done and its amazing! Its a romantic comedy with Demons and its has some of my favorite work, we shot it at my studio and had a blast!

Dr. Gorehound: What efx did you do on the film Joshua? is it another satan’s child type of film like The Omen?

Tom Devlin: Joshua is one of my favorite movies! Not just because I have worked on but in existence! Oh its not religious at all, its evil though it was the first movie I did as 1313fx and still one of the best that I’ve got to killed people in and made a cool monster and some cool gags!

Dr. Gorehound: I love zombie films, and i read your imdb and seen there is a film called ZMD: Zombies of Mass Destruction? what efx are you doing in that film? Is it a throwback to George A. Romero’s gorie as hell zombie films like Day of the Dead?

Tom Devlin: ZMD is a cool Zombie flick and there are bits of Romero in the political satire of it and it tips its hat to many others as well. On the FX side of it well its a zombie movie so yeah we made a sh*t ton of undead town folk, and we shot a bunch of people, slit throats, skinned faces, and weed whacked jugular…you know the usual! lol.

Dr. Gorehound: What advice would you give to up and coming fx artist’s that want to succeed like you in doing what they love?

Tom Devlin: Do it because you love it and not to make a buck off it..you keep at it that will come!

Dr. Gorehound: Any projects you working on at the moment?

Tom Devlin: Like I said “MY NAME IS GACY” and I start Lola Wallaces Half Way to Hell on next week staring Josh (Sasquatch) Cornel, Sean (Wasteland) Gordon, Victoria(Werewolf in a Woman’s Prison) Demare, Elske (Jessica Rabid) McCain as well as Trent Haaga and John Karyus and then next month I’m doing Sean Cains Silent Night Zombie Night which has Lew Temple and Fellisa Rose attached! :)

Dr. Gorehound: What website/myspace can we contact you at?

-Well thank you Tom for letting me interview you! Much appreciated as a fellow gorehound!