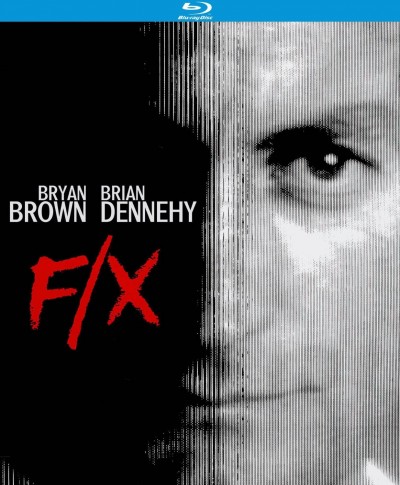 A movie special effects man is hired to fake a real-life mob killing for a witness protection plan, but finds his own life in danger.

“Nobody cares about making movies about people anymore,” muses Diane Venora in Robert Mandel’s F/X (1986). “All they care about are special effects.” This statement made nearly 30 years ago has turned out to be eerily prophetic as audiences, particularly the variety who eagerly await summer movies, seem to be less discriminating nowadays.

F/X is one of the most entertaining and compulsively watchable thrillers of recent memory. A film that somehow passed me by during its theatrical run, I caught up with it on VHS. I recall being dismayed by the inclusion of the 1982 song “Just an Illusion” by Imagination that plays over the end credits as I felt that, like the ridiculous song that played over the end credits of Wes Craven’s masterful A Nightmare on Elm Street (1984), it undermined all that preceded it. It felt tacked on. That being said, F/X, like William Friedkin’s To Live and Die in LA (1985) and David Lynch’s Blue Velvet (1986), F/X is a film that would only grow on me after subsequent viewings. The final minutes should really be viewed as a visual pun on the film’s overall theme, which begs the question as to what is real and what is fiction? 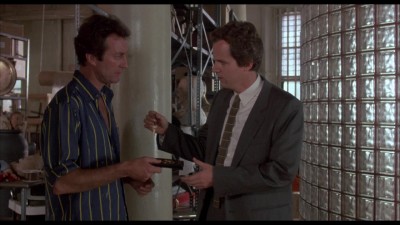 F/X has a subtitle: Murder by Illusion. Rollie Tyler (Bryan Brown) is a master special-effects make-up movie wizard, someone along the lines of Tom Savini or Rick Baker. He is approached by a group of people who claim to be from the Justice Department who try to sweet-talk him into staging a fake assassination of a reputed mobster, Nicholas De Franco (Jerry Orbach), who is about to testify against his associates prior to entering the Witness Relocation Program. The goal is to give the impression that De Franco is dead before the real-life mobsters can get to him first as a contract has been put out on his life. Rollie, whose apartment is adorned with posters of Zombie (1979) and Fade to Black (1980) and effects prosthetics he has made, is initially very hesitant, and when he refuses their offer he is told that they will now go back to his biggest competitor to do the job. He then asks them to give him 24 hours to think about it, and the carrot at the end of the proverbial stick proves to be a very strong catalyst. After setting up mobster De Franco, the fake assassination goes off without a hitch. Unfortunately for Rollie, the truth about what he has just done is about to be revealed to him when he is suddenly thrust into an unbelievable chain of events that he himself, despite his stature in an industry that prides itself on make-believe, probably never could have imagined. 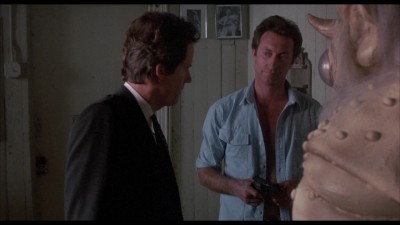 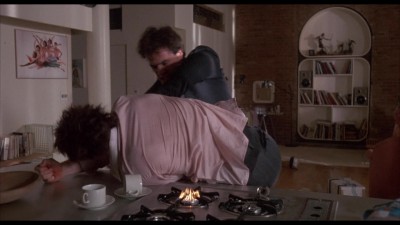 While the film may not seem very original now, it still holds up remarkably well for the material. One of the things that truly bolsters this film is the casting. Bryan Brown is terrific as the special-effects man, and Diane Venora is equally likable as his actress/girlfriend. Mason Adams, best known to American audiences in his role as the managing editor in TV’s Lou Grant, shines as the mastermind behind De Franco’s exodus from society. Leo McCarthy (the phenomenal Brian Dennehy) is the police lieutenant who, along with his partner Mickey (Joe Grifasi), is assigned to the case. The banter between Leo and Mickey is entertaining Cinematographer Miroslav Ondricek, who sadly passed away in March of 2015, does a beautiful job lensing F/X, elevating it to a highly cinematic sensibility. Also on board are the late veteran character actor Trey Wilson and Roscoe Orman, who played Gordon on Sesame Street, as Leo’s superior. 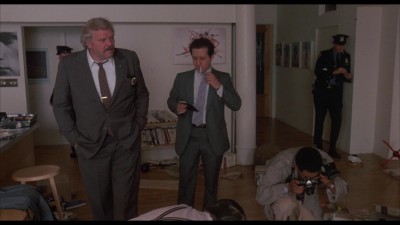 F/X was filmed during the summer of 1985 and is a bit jarring to watch: there are no cell phones and the computer equipment that looks like it came from the Stone Age. Due to the lack of these modern day conveniences that we have all become completely reliable on, Rollie has to use his wits to survive.

Bill Conti’s score is a fully realized work, complete with an orchestra, the sort that you don’t really see much of in movies nowadays, and it fits this movie like a glove. From the film’s opening over the Orion Pictures logo to the love theme to the cat-and-mouse chase through Central Park to the spectacular car chase through Manhattan, this score can easily be enjoyed on its own merits.

The transfer of this film on Blu-ray is a considerable improvement over the original VHS tape which suffered from limitations inherent in the technology of the time. The multiple laser disc releases and DVD releases were not much better, but Kino Lorber has done an admirable job of releasing the film this time around. There is some film gain apparent in the darker scenes, but nothing terribly distracting. The extras on the Blu-ray consist of an interview with director Robert Mandel (14:00) wherein he discusses the pleasure he had in making the film and how he didn’t feel qualified to helm the job due to his lack of experience directing thrillers or action films, though the producers felt otherwise. The director comes across as affable and appreciative of those who contributed to making the film. There was also talk around the time of the release of F/X that the executives at Orion Pictures wanted a different title because they felt the audience would be confused by it but, to their credit, they accepted what the producers requested.

The Making of F/X is a featurette that also runs 14 minutes in length and was shot during the film’s production, presumably to drum up interest at the 1985 San Diego Comic Con as actor Brown addresses the camera and makes reference to a “convention”. Behind-the-scenes documentaries and fan conventions abound today, but 30 years ago there was very little information outside of Fangoria Magazine that could illustrate how special make-up effects were actually accomplished. Carl Fullerton, the special make-up supervisor who now has over 70 film credits to his name, provides his expertise to convince the audience of Rollie’s role. John Stears, who won Oscars for his work on Thunderball (1965) and Star Wars (1977), talks about the four instances that he himself was approached by reputed mobsters to do what Rollie does in the film (art imitating life). Terry Rawlings, a veteran of some of Ridley Scott’s best work, is also on board as the editor and keeps the film moving along at a brisk pace with great match shots and visual and aural segues.

Rounding out the extras are theatrical trailers for F/X and the sequel from 1991, F/X 2.