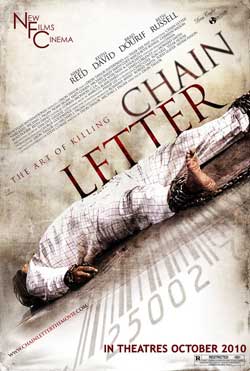 When high school senior Jessie Campbell and her tight-knit group of friends begin to receive a series of foreboding email chain letters, they have no idea the terror that awaits them. With a warning that if they break the chain, they will lose a life, the seemingly harmless email turns deadly when one-by-one the friends that do not forward the chain letter are hunted down and gruesomely killed by horror’s newest villain, the Chain Man.

I like listening to the blues. There’s something magical about a simple I, IV, V chord progression and how, even in its simplistic predictability, genius can be found. Slasher films can be the same way in that, regardless of recycling plot-lines and character stereotypes, fans of the genre always return because they know what they’re going to get: good-looking people getting slaughtered. Chain Letter is exactly the movie I was expecting to see. I knew it was going to have a cookie-cutter plot. I expected it to have some decent kill scenes. I knew they were going to introduce what they are hoping will be the next franchise-able villain. I just wasn’t sure if I was going to enjoy its predictability or groan at it; be shocked at plot twists I didn’t see coming, or yawn at the banality of it all. As it turns out it was a little of all those things.

To begin with we have the requisite high school setting, populated with the most attractive twenty-somethings Hollywood could find. The dramatis personae consist of all the mainstays: Jock, cheerleader, nerd (who of course is a gamer, dammit), gear head, academic, and, as much as I hate to say it, the token black guy. Right off the bat it’s wincingly similar to “Scary Movie”. Now insert a premise, the dreaded chain letter (pass this on or Jesus won’t love you type of thing) to be used as a reason to wax all these people, then introduce the guy who in grand fashion will end these poor “teens” lives and you have the movie Chain Letter.

The acting is good. The film is well shot. Some of the kill scenes are fantastic, others are kind of run-of-the-mill. They almost even turn a cookie cutter plot into something with some depth, which was initially one of the more exciting aspects of the film. Sure, the obvious lure of the chain letter is a potential home run for this genre, but add to it a secret society of technology haters whose dream come true was the paranoia incited byY2K. When Y2K didn’t ultimately turn out as they’d hoped what’s left to do? The only thing any self-respecting technology hater can do: murder the tech generation using their own love of technology, of course. The problem is that the film maker never developed this line of the plot. They never connected the dots between the tech-haters and the henchman, appropriately dubbed the Chain Man (who kills with his…chains), who carried out their master plan. It bugs me that they even introduced them into the story at all. Except it was fun to see all the actors. 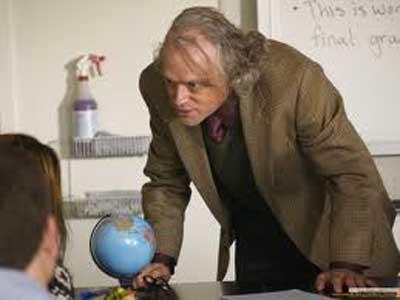 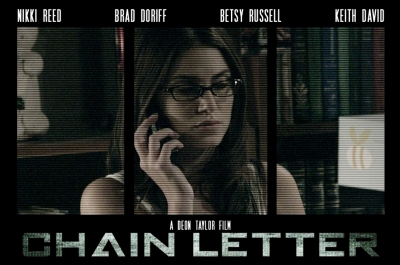 And, as stated previously, the kill scenes were fun at times too. Who knew how many different ways there were to kill someone…with a chain. Not the Cenobite type of chain, or even 80’s hip-hop star type of chain, but the tow truck type of chain. If you’re wondering, know that there are a number of inventive and messy ways to end someone’s life with a freakin chain…if you’re still curious, check out this movie. Nothing will shock you about the story, but, like listening to the blues, it can be interesting to see what someone else does with a familiar chord progression.