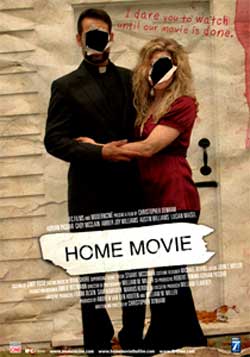 In the woods of upstate New York live the Poe family. They have a seemingly idyllic lifestyle but all is not what it seems. As the father slowly begins to realize as he documents the family’s day to day life on home video, his children aren’t as perfect as he thinks them to be. In fact, they are evil personified. David, along with his wife Clare have to find a way to stop their children from destroying all they have worked for & themselves as well.

Has anybody ever heard of this picture? I think I read a small article about it a few years ago in FANGORIA magazine but I never saw it in a store or for rental or anything afterwards. But as I was perusing through Netflix one evening I saw the title & remembered reading about it so I added it to my queue expecting little from it. Boy, was I surprised! “Home Movie” is one of the most disturbing movies I’ve seen in a long time & as all of you know, The Black Saint has pretty much seen them all. If I had seen this when it was actually released (2008) I might have given it a “Best Of The Year” nod. It’s really that good.

An entry in “The Bad Seed” mode, “Home Movie” tells us the story of the Poe family. Father David (Adrian Pasdar), Mother Clare (Cady McClain) & twins Emily & Jack (Amber Joy & Austin Williams). They live a pretty peaceful life in the remote woods of upstate New York. David is a Pastor & Clare is a Child Psychologist. The film is mostly shot in a cinema verite fashion by David with his home video camera. He basically just follows the family around as they go about their day to day business. But we pretty much know something is wrong with the kids as soon as we meet them since they don’t speak to their parents at all. They do communicate with each other though, sometimes seemingly telepathically but the film doesn’t really elaborate on this point much.

The sh*t starts to hit the fan in a simple yet dangerous fashion, the kids start throwing rocks at their father from a distance. This soon escalates to animal torture (cat crucifixion) & torturing one of their friends at school. Knowing it’s their kids who are responsible, David & Clare don’t seem to know what to do about them despite the fact that Clare is a psychologist. They decide to show them more “Love & Affection” instead. Bad parenting choice. The children’s slow degeneration into pure evil is chronicled by their father (& the film) in disparate pieces, usually on holidays. We see them on Halloween, Thanksgiving, Christmas, New Year’s Eve & so on. Each time things are a little bit worse & it shows on the parents faces & in their actions. As the movie progresses we see the parents slowly realize that their children are the definition of evil & they really don’t know what to do about them.

David & Clare discuss how to treat the children’s “delusions” (their word not mine) & since they are both Pastor & Psychiatrist they argue as to help them spiritually or medically. David even tries a sort of mock “Exorcism” on the kids at one point, to no avail. Later on in the film there is a revelation revealed about David that does shine a new light on things to a degree & it does add to the discussion in regards to the treatment of the kids but eventually it doesn’t really add to the film significantly.

One of the funnier aspects of the story takes place when David takes it upon himself to tech the kids various “Skills” & tell them stories. The “Skills” include lock picking, Teaching them how to dispose of dead animals, etc…etc. The story he tells them is about a Dragon that eats people while wearing a paper bag on it’s head. All of this rears it’s ugly head later on in the film. I did find it amazing that the parents really couldn’t figure out conclusively that their kids were wacko & that eventually their lives would be in danger. This is one of the few miscues that the film makes during it’s short but intense running time. In addition, there are times when the film speeds up for no discernible reason. There is no reason thematically that this should be going on & it happens suddenly & without warning. It doesn’t help the movie along & it actually confused me for a bit since no one is “operating” the camera during these moments. Another slight miscalculation from writer/director Christopher Denham.

But the miscalculations are few & far between in this one people. The kids get more & more evil & the parents get more & more scared of them until the thrilling last 10 minutes of the film where it all comes full circle. The movie is genuinely sinister & upsetting. All of the performances are great even though there are basically only the four main characters in the film. There is a portion of the film where the kids actually cheer up after being given some medication to modify their behavior & they invite a friend over to their home. The same kid that they tortured earlier in the film during school. They talk during this piece of the movie & they seem like any happy go lucky kids looking to have some fun. The parents pat themselves on the back for a job well done but the kids soon put the kibosh on that…in a very ugly way. I was so impressed by the emotionless passivity that Amber Joy & Austin Williams (real life brother/sister) bring to their roles. They’re both so innocent looking & so f*cking sinister at the same time. All of the performances were sadly ignored as was the film upon it’s release. It’s a shame that more people haven’t seen this film & I’m hoping that this review might help to change that.

I know I haven’t really said too much about this movie in the space I had to write about it. I’m doing that on purpose because I truly feel that “Home Movie” is a movie that I want my acolytes to watch without any pretensions. It’s a movie that needs to be discovered by the masses, those of us who love horror movies not for who’s in them or who directed them. This is a horror movie that demands attention because it’s a great one despite it’s few hiccups. It’s one that stayed with me for a couple of days after I saw it. For me that’s all a horror film needs to do. “Home Movie” did it to me & I’m pretty sure you guys will feel the same. Trust me, it rocks!! With that being said, The Black Saint would like to remind all of you to please say your prayers each & every night. I’ve been feeling low as of late & I need an influx of dark, nasty love that comes from the prayers of my most fervent acolytes. So let’s get to it people, I’m waiting & I’m listening….Black Saint out!!