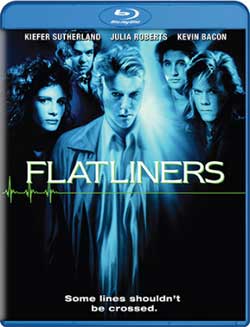 An edgy, eerie supernatural thriller about medical students using their skills to try crossing over to the “other side.” After they’re revived, the students are haunted and consumed by what they’ve seen, as their fears, guilt and old memories take root in the physical world. This star-studded film may be remembered more for the tabloid frenzy, upon the film’s release, surrounding actors Julia Roberts and ditched beau Kiefer Sutherland.

Hell-o, maggots of the macabre. “Today’s a good day to die.” This review is for a timeless classic that has still held up today as one of the most original Horror movies in recent history, Flatliners. I had the pleasure of seeing the theatrical release as it hit the big screen and I have just about worn out my DVD every since it has been available to the public. This film is a must see for any fan of the genre. It stars an all-star cast and is directed by none other than Joel Schumacher (The Lost Boys) and produced by Micheal Douglas (Big Trouble in Little China, Unlawful Entry). This is a fun and twisted trip beyond the grave as never seen before, and the whole point of the dark journey is just to return from the other side… with the answers to death. 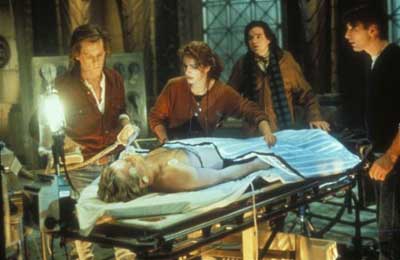 Nelson (Kiefer Sutherland of The Lost Boys, Stand by Me and Eye for an Eye) is a young, ambitious scientist with a bright (or rather dark) idea of medically killing himself and coming back from the dead with the answers to death. He of course can not do this alone, so he tries to recruit the top grade point averaged students in his class to help him die. At first, they all refuse to take part in this plan of scientific suicide. Nelson will stop at nothing and is determined to put his lights out in one way or another, with or without them. His friend and classmate, Dave Lebbracio, has just attempted to quit his studies over a week’s suspension for trying to help a patient when it was forbidden by the school. They all try to talk Nelson out of his plan but he forces them to participate.

One by one, they all “jump on his coattail” to see what life was like after they have died. Rachel (Julia Roberts of Sleeping with the Enemy) has her own personal reasons and has been obsessed with death for quite some time, because of the suicide of her father when she was a young child. Dave (Kevin Bacon of THE ORIGINAL Friday the Thirteenth, Stir of Echoes and Tremors, as well as the degrees of… game, which I am a part of) is the Atheist of the group and does not buy a word of the stories spewing forth from Dave’s mouth, until he eventually goes under himself. 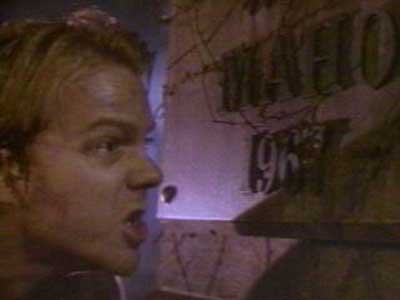 Every member of the death seeking group, with the exception of Randy Steckle (Oliver Platt of A Time to Kill), clinically kill themselves and return after a bidding war of how long each will remain dead. Not with the answers to death, but the sins of their past. Nelson withholds information as the rest of them find out for themselves what awaits them on the other side. A girl in elementary school that Dave use to pick on named Winnie comes back to verbally taunt him, just as he did her. Rachel’s dead father comes back and is behind her everywhere she turns, Joe Hurley ( has a library of secretively taped sexual encounters (“The Joe Hurley video library”) with everyone that crosses his path and vision, excluding his soon to be wife. The most (physically) painful encounter of them all is bestowed upon the leader of the chasers of the Reaper, Nelson. He is physically beaten and tortured by a dark mistake of his past, named Billy Mahoney. Randy sits back, watches and verbally documents everything on his tape recorder as his classmates off themselves and return from the dead.

This film is action packed from almost the beginning to the end. It sets a dark pace the entire way through and does not let up a bit. As many of you may have already guessed, the acting and direction is top notch throughout, and with a cast like this, why wouldn’t it be? The creepy score is provided by James Newton Howard and sets a dark tone throughout the feature. I must tell you quite honestly, there is no other film with such dark creativity as this for it’s time. It has maintained its originality throughout the years and has never been duplicated. Hopefully, it will never be re-made. There’s no way a re-make could top this originally executed, macabre masterpiece. 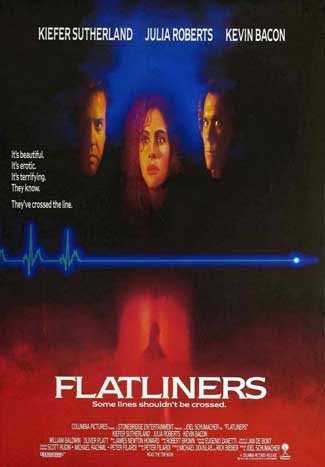 The gore score doesn’t get too high, but the special effects are awesome all the same. Continuity stays in tact throughout as we see a painful, self sewn scar on Nelson’s face progressively heel.. The bodies for the medical class are grotesquely featured in gory detail as the medical students carve into them and identify each of the organs. The body that Dave could not save spews blood all over him in a delightful crimson splash. The color tone of the feature is just as dark as the mood, itself. Besides the extra given bonus factor that this is one of Julia Robert’s sexiest performances. She is amazingly gorgeous. Nelson and Dave subtly fight for her affection throughout.

All in all, Flatliners is another must see for fans of the Horror Genre. While it’s not an all out splatterfest of gore, it is still dark and creepy. It really makes you, the viewer, begin to think… What else is out there after you die? If you have not seen this timeless classic, I highly recommend picking it up for a watch. Due to its longevity, I’m sure you can pick it up for nine ninety nine at your local Suncoast or Best Buy. Although, it is worth so much more. I hope for a re-release with more special features as the original DVD version has none. I give this film, Flatliners, TWO (BACK FROM THE DEAD) HORNS UP. 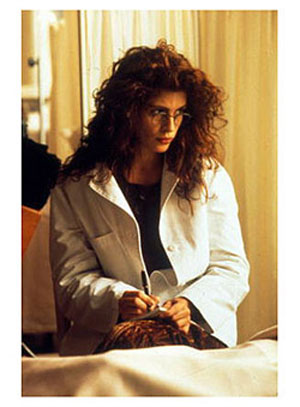 Until next time, this was Jay. Keep one foot in the grave, one fist in the guts and your eyes out for gore. Later.

Flatliners is now available on bluray per Mill Creek Entertainment