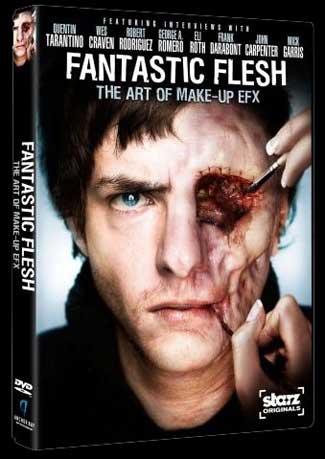 Go inside the world of makeup special effects for movies of all genres, from horror (Scream, The Thing) to fantasy (The Chronicles of Narnia) to sci-fi (Planet of the Apes) as K.N.B. EFX Group shares their techniques in creating monsters, aliens and … old people. Directors Quentin Tarantino, Wes Craven, John Carpenter and more tip their hats off to the magic makers themsevles, such as Howard Berger and Rob Bottin.

Every horror fan has an opinion on special effects. It’s part of the nature of being a horror fan. I’d even wager that, in some cases, a movie with a horrible story is saved by the special effects. It’s rare, but it happens sometimes. Starz, as in the cable movie channel, produced this fantastic documentary about special make up effects and released it on DVD through their company, Anchor Bay.

Just about every big name make up FX guy you can think of is in this movie: Tom Savini, Greg Nicotero, Howard Berger, Dick Smith, and Rob Bottin, as well as actors Simon Pegg, Josh Brolin and of course a few directors, Romero, Landis, Rodriguez, Tarantino, Garris and Roth all make appearances.

The film flows around how the FX guys got into FX, most sighting Jack Peirce as an early influence on all of them, as well as Dick Smith’s work on Planet of the Apes. From there it leaps around talking a bit about how each creator got their start in the business and how some effects were done etc.

Although, I think it could have been a bit more in-depth, I enjoyed this documentary. Hearing Rob Bottin in support of CGI vs. physical effects was a nice, if not strange, contrast to everyone else who were more or less uniformly on the side of practical FX. My only real gripe about this film was that it really just didn’t get into the nitty-gritty of make-up effects. They mention Lon Chaney a bit here and there, and Jack Pierce is praised whenever they get a chance. It’s also cool to have these big name FX guys reminding us all that they don’t just do fantastic monsters, they do the stuff that doesn’t always get noticed in films, like a bit of aging or very simple prosthetics to change an actor’s look, even slightly.

It’s that reminder that is really the stunning thing about this documentary that I think could have been explored a bit more. Sure, we all enjoy seeing how these guys make gruesome monsters and freaky creatures, but they dedicate maybe five minutes to talking about Max Von Sydow’s old age make up for The Exorcist. To be honest it is one of the most brilliant make-up jobs I’ve ever seen; until I saw this documentary, I never realized that Von Sydow was in his 40’s when that film was made.

For fans with a somewhat casual interest in make up FX, this is a great film to check out and get a decent all around look at what these guys do. However, I think for the people who are more into make-up work, either as fans or guys trying to break into that side of the business, this film will most likely disappoint. Sure, seeing Dick Smith talk about his work on The Exorcist and Amadeus is cool, but it’s probably nothing hardcore FX fans don’t already know.

Also, suspiciously missing from this disc are special features. Seriously Starz, you guys didn’t have any kind of behind the scenes footage you could throw onto this disc? No extended interviews? No work shop tours or anything? My guess is that Fantastic Flesh was special made for either the main Starz channel or one of its sub channels and then dumped on DVD through Anchor Bay as a way to make a bit of extra money. Once again, Anchor Bay f*cks us on the documentary release side of things. Come on guys! If you can pack a two disc set like Halloween: 25 Years of Terror and His Name Was Jason: 30 years of Friday the 13th, I think you could have done a bit more with this DVD.

As it stands, Fantastic Flesh is a pretty good rental, not something I could recommend buying, and sadly, it’s a film that I think most hardcore make-up fans won’t be able to take anything new from. 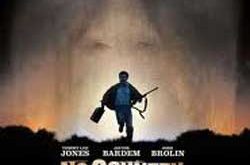