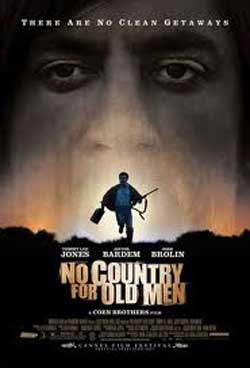 Violence and mayhem ensue after a hunter stumbles upon some dead bodies, a stash of heroin and more than $2 million in cash near the Rio Grande.

By the title and cover alone, “No Country for Old Men” is a bit of an unassuming virus that slowly gets under you skin. Even with its opening commentary by Tommy Lee Jones, we don’t expect the sequence of events that are to play out. He tells us in his retired voice that he’s seen alot…. but then there is the exception to the rule. In other words, evil is evil….there is no use in trying to figure it out. But roles in life must be accountable to when these times do happen

Simply we are introduced to Llewelyn Moss who stumbles upon the aftermath of a drug deal gone wrong. The silent event that sits within the desert was one of no survivors but yet a truck full of drugs and a briefcase full of cash. The temptation is too much to pass up as he grabs the loot and makes for the sunset. He is not our villain, just an opportunist.

Ed Tom Bell played by Tommy Lee Jones is our resident sheriff. He investigates the crime, detectives the event and does what his job entails. He may not like it, he may be too seasoned not to ignore it, but he follows in the footsteps of his forefathers and does what he is hired to do.

The Coen Brothers are known for writing smart scripts. They write in certain vein that makes one think. The film isn’t afraid to step outside its boundaries offering something much bigger than assumed. NCFOM, is one such film with its lack of background score simply moving from frame to frame and subtle chaos that is brooding beneath. Our villain in this film is truly a a villain. He wears the skin of man, of a thug, but beneath the surface something more diabolical, more calculating and evil resides. When we get right down to it., its that evil that is hinted at in action and words that gets under your skin. Javier Bardem is that villain who goes by the name of Anton Chigurh. His humanity is somehow missing, his sense of humor is void and yet he is the most peculiar in his approach wielding an otherwise heavy piece of machinery …a compression tank with a nozzle much like they use to take out bovines in a slaughter house. No guns, no need, and truly effective in its use. This weapon of choice is indeed a choice that paints the villain with a colorful use of non typical means.

We study his character in every scene looking for answers to his puzzle, but his dialog is smart, questionable, and mysterious at the same time. When he comes upon a gas station, the exchange of words quickly develop into a question of fate. One that isn’t spelled out but it’s clear to Chigurh. What has this gas station attendant done? Nothing besides being conversational, though its clearing Chigurh’s eyes that a line has been crossed and a price may have to be determined. His sarcasm is light and un effected by society mainstay which by default is a certain assumed small talk. Though one aspect of society that Chigurh just doesn’t participate in.

As the script unveils the viewer is expected to read between the lines in an almost cryptic way. This Anton Chigurh is no ordinary man. In fact he is our super criminal who doesn’t fit into the world he lives in. His style, his banter, his confidence all contradict that which makes us human and because of it paint him as a rogue individual. 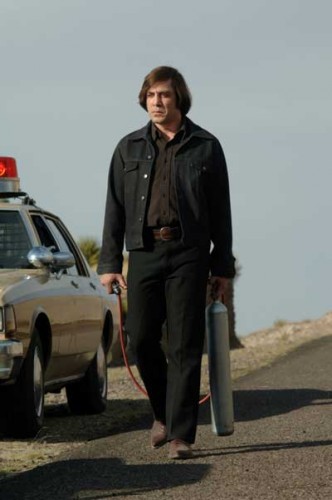 Because of its unusual script and seemingly normality turned upside down, this film stands as a monumental achievement in cult film presentations. Cowboys, guns, bloodshed, and a air compressor. What a unique mix. We learn more thru some of the DVD extras, though in essence there are 3 characters who never really entirely confront each other in person. Woody Harrelson is our confident hired gun who calls himself Carson Wells. Carter “gets” Chigurh, but only enough to fail when he actually moves in on him. Their exchange is rather unique and furthers Anton’s cold demeanor. We learn that Anton respects the idea of Fate which becomes part of his MO. Ed contradicts Anton as our white horse sheriff with a respect for the law and its traditions. Its a mixed up world….one that Ed is fed up with. 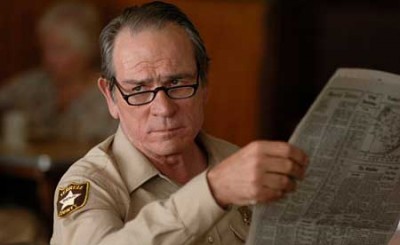 No Country for Old Men is a brilliant piece that works as a slow grind. It’s strangely unique and uniquely strange. The film is noted as the most violent that the Coen brothers have made to date. There is a deeper literary implication here that reveals upon re-watches. The film analyzes a few moral implications and contemplates what the devil might look like if he came to Texas. Give yourself a treat and have a sessions with this masterpiece story and film experience. 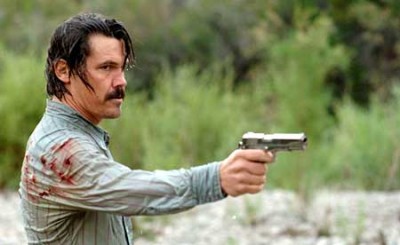