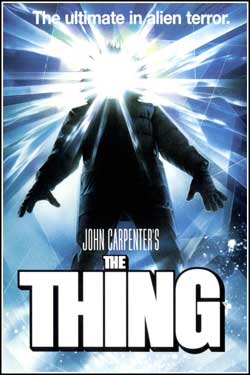 Scientists in the Antarctic are confronted by a shape-shifting alien that assumes the appearance of the people that it kills.

“Now I’ll show you what I already know.”

John Carpenter’s most indispensable film, The Thing, is based on John W. Campbell Jr.’s Who Goes There?, a novella dealing with paranoia and the fear of assimilation by an alien life form. Carpenter, a fan of the first cinematic incarnation of the story, The Thing From Another Planet (directed by Howard Hawks), opted for a more faithful adaptation, focusing on the psychological toll taken on the scientists and the Lovecraftian aspects of the Thing itself. At the beginning of the film, MacReady (Kurt Russell) is playing chess against an ancient computer (well, it’s only from the ‘80s but by today’s standards it’s an antique). He is caught at checkmate but then proceeds to pour a glass of whiskey into its circuits. What is, on the surface, a fairly amusing character moment is actually a foretelling of what he must face: a being with superior resources who does not react kindly to being cornered. His reaction signifies his characteristically American retort – the two responses are not wholly different. 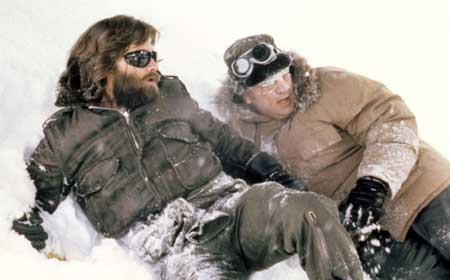 Antarctic scientists, through a series of strange occurrences, uncover an extraterrestrial spacecraft buried in the ice. MacReady is a pilot who must navigate the harsh environmental conditions from the American station to the Norwegian one where the crew mysteriously and inconspicuously (for the most part) has gone missing. Through found footage, the American crew learns that the Norwegian scientists were the first to discover the craft, eventually unearthing an alien pilot. When the American crew return to camp with an amorphous two-faced being, it isn’t long before they realize that the Thing is a shape-shifter (merely lying dormant in the ice hours before) with the ability to absorb its victims’ cell structures then imitate their likeness perfectly. It stores these assimilations in its memory banks and can transform at will, only when cornered will it discard its calm facade and become aggressive. 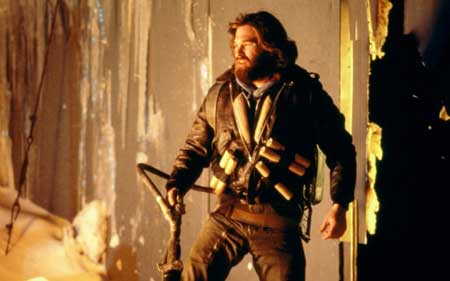 A series of iconic scenes litter the film such as the infamous dog transformation and blood test scenes, all the while exacerbating the rising state of distrust amongst the crew. It is, however, to Carpenter’s credit in how he ambiguously handles these suspicions. Effortlessly, the hopelessness of the situation progressively dawns on every member of the crew and they deal with this fear in ways which are logically-bound to their characters’ state of mind. The most terrifying aspect of the Thing is that its influence extends far beyond the physical, creating the claustrophobic notion that one is already a part of its hive mind.

This is what separates the American appraisal of Carpenter’s work from well, the rest of the world: hidden well (sometimes too well) within Carpenter’s inimitable flair for horrific imagery is a deeper meaning depicting a universal truth about humanity. With They Live it was hyper-commercialism, with In the Mouth of Madness it was psychological corruption, with Halloween it was the faceless existence of evil, and here, with The Thing, it is self-deception. Released at a time when awareness of the AIDS virus amongst the general populace was young, the film indicates the power of how we influence each other in unknown ways. There is also the danger of the collective conscience and the oft-debated philosophical question: is the external the only discernable difference we observe in each other? And, how do we know our actions are our own and not driven insidiously by some other being or idealism?

With music by Ennio Morricone (though Carpenter edited his compositions heavily – to Morricone’s disdain), cinematography by Carpenter regular, Dean Cundey (Halloween, Escape from N.Y., Psycho II, Big Trouble in Little China, Jurassic Park, and Back to the Future), and visual effects by notorious masters, Rob Bottin (The Howling, An American Werewolf in London, Robocop, Legend, Total Recall, Se7en, Fear and Loathing in Las Vegas) and Stan Winston (Alien, The Terminator, Leviathan, Edward Scissorhands, and Predator), The Thing is a tour-de-force of expert filmmaking, remaining one of the greatest horror films of the 20th century; supporting the debate that Carpenter is one of the most far-reaching minds in horror cinema.