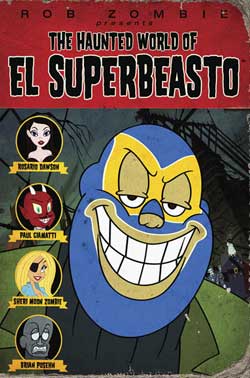 The story follows the adventures of El Superbeasto, a washed-up Mexican luchador, and his sultry sidekick and sister Suzi-X as they confront an evil villain by the name of Dr. Satan. The adventure, set in the mythic world of Monsterland, also has a character named Murray the robot.

Take a Tom and Jerry cartoon and add Rob Zombie to the mix and what do you have? Something wacky, crazy violent, sexy and absurd. Rob Zombie’s recent “El Beasto” is one helluva cartoon. The bad news?…it’s not for kids. The good news? ITS NOT FOR KIDS. Right out of the box you’ll grab on to the rhythm. Our feature character is called “El Beasto”. He is narcissistic, self serving, obnoxious, violent, charming, a jokester and well..all that in between.

In fact in first act we are introduced to him making a p*rno, casting starlets and participating in it as well. Only those with the bodies, and appeal get the gigs. Those with acting skills….are well….. unqualified. As we join him in his feature in progress he is mid sex when the participants transform into demons. No problem as he smashes them to kingdom come and films it for kicks.

El beasto is profiled as he takes on numerous acquaintances (ladies), pummels all those who stand in his way, beats the crap out of innocents and lives the fast lane with nice cars, nice things and all night partying. If you don’t get the picture yet, then you must have not been watching the movie.

Enter in our other character de force “Suzi X” who is voice overdubbed by the rather talented cartoon voice of Sherri Moon Zombie. She’s a blond bombshell and pack of intense dynamite. Well endowed, banging cartoon body she also is something of the 1 person warrior herself. She takes on a town of zombies without batting an eye and uses her gun toting skills to wipe them out like cattle. 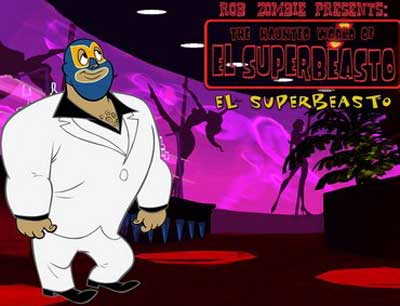 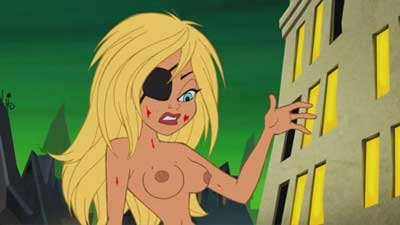 Now the highlight comes in a few familiar voices which will probably surprise you seeing that the lines and dialog they recite. Rosario Dawson plays the role of hot sexy ass stripper Velvet Von Black, Paul Giamatti is appropriately voiced as the weird over the top Dr. Satan and throw in a few surprise appearances by Bill Moseley as Otis Driftwood, Sid Haig as Capt. Spaulding and Clint Howard as Joe Cthulu. It’s a motley crew band of freaky regulars that only emphasize the crazy violent world of El Superbeasto.

Now to review this is a chore in itself, as there is so much going on at all times. The world we are introduced to is full of violence, strippers, monsters, demons, sex, nazis, zombies and plenty of big cartoon nakedness (boobies) The cartoon style feels very old school with simple lines and big color. 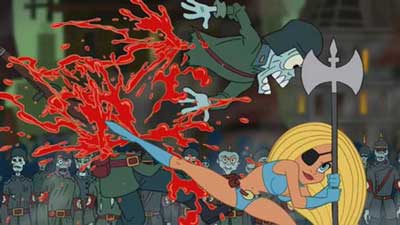 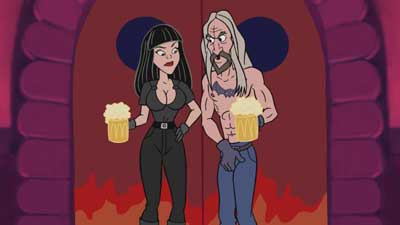 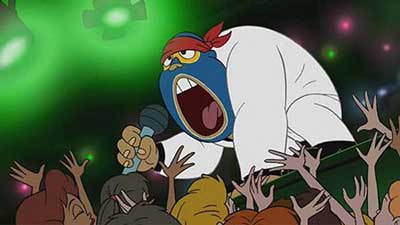 The journey takes us thru swamps, castles, nightclubs and strip bars to name a few. Let’s see….. we have octo-women, naughty vixens, machine gun fights, nazi zombies tying to take on the world, Satan and even Hitler’s head in a jar which is preserved and still functioning. Not enough? How bout a big smelly ape with a rather sophisticated way of speaking while he plunders and rapes women? Our target seems to fall on the stripper Velvet Von Black who holds the key with the birthmark of 666 embedded on her ass. Dr Satan wants her, The ape gets her and Super elbeasto is on a search for her after falling head over heels for her stage performance……wow what a premise.

Where does Rob Zombie fit into this film? take your pick…Director, producer, story writer and “based on original cartoons by”.

The film also deserves special mention for the hilariously worded theme songs that were written as a constant overlay by the screen credited Hard ‘n Phirm. The lyrics are almost as absurd as the film itself and provide a great hilarious accompaniment that are purely entertaining in their own rights. 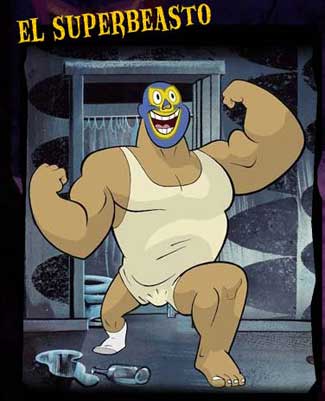 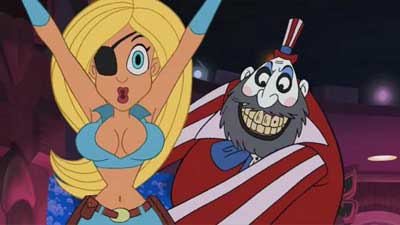 This is one funny, fun and adult orientated bowl of chili that has to be digested and taken in as fast as you can. Horror viewers will find alot of appeal here and the rest of the world may be transformed into Zombie heads once and for all! Don’t miss your chance to ingest some el Superbeasto!