Good evening Ghouls and Maggot eaters today i bring you one of the best female FX artist in the indie filmmaking world named Kristi Boul and she works for Rancid House FX and her gorie work can be seen in upcoming films such as SWEATSHOP,CLOSET SPACE, and SWAY! Lets get started! 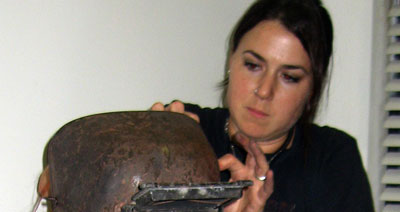 When did you first become fascinated with the world of special FX and makeup?

I was always interested in FX for as long as I can remember but I bought my first kit about 12 years ago and started teaching myself.

What FX company do you work for now?

my company is Rancid House FX, and I also work with Marcus Koch of Oddtopsy FX.

What kinds of makeup fx/prosthetics does your company specialize in the most?

I’ve always done gore FX and prosthetics. I’ve been asked to do costume and beauty but I’m not really into that type of work.

Do you also make horror props for maybey haunted houses and attractions?

So far all the props I made were used for film, I have

Are you a horror director or have your zombie/monster makeup fx been featured in films?

I got my start a couple years ago working with Mel House as second unit FX for Closet Space. After that I started doing the main FX work on Sway and Sweatshop, and helping Marcus Koch of Oddtopsy FX with Walking Distance. Those films are in post. I’m in mid production on Backroad and starting up Possum Walk early next year.

Do you plan to make other types of scary monster makeup fx besides zombies in the future?

I have made everything from Zombies to festering penis’s and seeping vagina’s, but I plan to get into more things such as creating a werewolf.

What type of efx did you do on the slasher film “sweatshop” and what can we expect in terms of gorie deaths? What is this film about?

For Sweatshop, I created the bad guy hammer bearing “Beast”. The director Stacy Davidson wanted to go for a mangled type head such as the classic character “Jason Voorhees”. I worked with Mike Oliver who created an amazing “HAMMER”, and together without giving too much away we smashed heads, mangled and maimed people.

Sweatshop is an industrial music-fueled horror feature in the tradition of 1980’s splatter films. Nine kids set out to throw an illegal rave inside an abandoned factory, but the fun is cut short when a dark presence begins hunting down and slaughtering them in the most gruesome ways imaginable!

What is the movie “sway” and “closet space” about and what efx did you also do on those?

To sum Sway up “If you are disturbed by themes such as murder, rape, dismemberment, forced prostitution, slave trading, torture, incest, racism, religious fanaticism, and child abuse, SWAY is definitely not your movie.”

Closet Space is about five graduate students on a search for their missing professor stumble onto a discovery so terrifying and unnatural that the human mind can barely comprehend it. The laws of nature and physics are merely the first layers to be peeled back and discarded as the group continues their inexhaustible search for their mentor….which leads them deep inside the Closet Space. But…there are things that live inside the vast emptiness. Horrible, hungry things.

I was second unit FX on …Closet Space, basically I recreated some of the “zombie-like” victims and an eyeball that moves, lots of black blood etc. Marcus Koch with Oddtopsy FX created awesome FX in Closet Space, including a man eating vagina.

What are some of your favorite horror movies with impressive gorie FX/deaths?

My absolute favorite movie is An American An Werewolf in London, I would love to get the chance to work on a werewolf film.

What are some your favorite FX legends that paved the way for you to do what you love?

My main influence was growing up knowing my cousin (Dorothy Pearl) worked on the Texas Chainsaw Massacre back in 1974, as well as Poltergeist and Cape Fear. That always fascinated me.

What do you think of FX legend’s Tom Savini and Greg Nicotero’s special fx since they created some of the best gorie stuff for George A. Romero’s zombie films??

Nicotero is awesome, I’ve met him at a few conventions and his work is amazing. He’s pulled off so many bad ass effects one could only wish they had his talent. As well as Savini, he’s amazingly talented and an idol to many striving make-up artists.

What are some of your favorite horror movie director’s? and why?

That’s a hard question I admire so many. Tobe Hooper for “The Texas Chainsaw Massacre” is my personal favorite! But I’m a big fan of Wes Craven (The Last House on the Left, The Hills Have Eyes, A Nightmare on Elm Street, The Serpent and the Rainbow, Shocker, The People Under the Stairs, etc.), zombie king George Romero, Clive Barker (Hellraiser, Nightbreed, etc.), John Carpenter (Vampires, The Thing) , and David Cronenberg’s Naked Lunch is nice and twisted.

Do you plan to leave efx and concentrate on only directing or do a mixture of both? Why?

As of now I don’t have any plans to direct. Make-up FX is my passion and keeps me busy enough. Plus the director carries all the stress.

Do you think the FX industry is a male dominated area, and do you think thats going to change with more females stepping it up and doing as much FX work?

The industry is male dominated and more females probably will get into it. But I doubt there will ever be more females than males in the FX industry.

What tips can you give for us to make our own zombie makeup fx with maybey some in home ingredients?
for cheap.

Cotton and latex! You can make a lot of nastiness with cotton and latex. I make cheap eyeballs too, out of wooden balls, paint, thread and resin. You can see one in the trailer for the Grindhouse competition “Stormtroopers of the Apocalypse”, yet another one of Stacy Davidson’s creations.

What do you think of the “SAW” films? do you think there just gorie with a zero interesting story? I happen to like the first 3 and after that they just became ridiculous.

I can agree with you there. I liked the first couple SAW films they were original with very complex death traps. But damn let it rest in peace so we can still try and appreciate the first three.

What do you plan to do this halloween?

I usually work on Halloween but this year I’m taking off and going to a party as a Pirate Hooker.

Thanks for giving us your undead time Kristi! :)