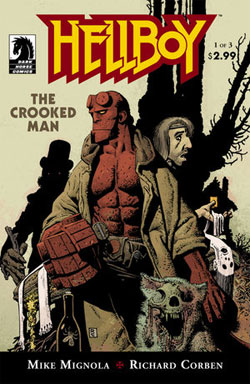 SYNOPSIS:
Again we find Hellboy in the middle of another exciting adventure. This time the man in red is trapped in a crumbling church against all odds in the late 1950s. Hellboy must save a man’s soul from ancient witches, exploding corpses, and finally the evil magic of Crooked Man himself and his bag of tricks.

REVIEW:
Some similarities have been made to the tone of “Hellboy: The Crooked Man” with regard to Manly Wade Wellman (May 21, 1903 – April 6, 1986). Wellman’s character, “Silver John” (aka John the Balladeer). “Silver John” has the spirit of this tale with its backwoods setting in Virginia in the Appalachain Mountains. Though in all honesty I feel a more prominent connection to earlier H.P. Lovecraft tales from his pre-Cthulhu era in Rhode Island. Mike Mignola continues his highly regarded comic series which began in 1993, strangely enough in a San Diego Comic Con program book.

Tom Ferrell returns to his old land, the same community he fled from many years ago. He comes across a person he from that time, Core Fisher, who is strangely haunted by witches and creatures from the woods. The area is haunted by “Melungion Witches” who have descended from settlers who disappeared at Roanoke Island. Rumors tell that the Croatan Indians got all mixed in with the Melungion’s and mutated into a strange breed of human that live in theses Appalachain Mountains. Hellboy and the characters he’s traveling with arrive at a Church. On consecrated grounds or not a blind priest defends his church from the creepies that seek revenge from Hellboy, Tom and Cora. We find out that Tom took Cora out there to the mines when she was a kid and “got all mixed up in Witchcraft”. As the story continues we finally meet the Crooked Man who has come to collect Cora. Hellboy himself is merely a supporting figure here for the confrontation of wills between man, god, and the other red guy with horns on his head.

The heighten the horror in this three issue minis series the series is deftly illustrated by the wizard of ink- Richard Corben. The 67 years old Corben has been around for decades in the comic biz. He is most notably respected for his 1960s Underground Comix and Warren magazines such as Creep and Eerie. In the 1980s he made famous the naked action hero “Den” (as seen in the 1981 Heavy Metal movie).

An interesting element to the story of “Hellboy: The Crooked Man” is the instrument of evil that appears in the story, strangely called a “Witchball”. And if you needed to take care of any issues or persons that nave been bothering Mignola provides a handy recipe.

A must for any reader of horror fiction. 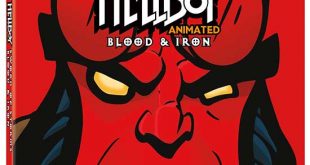 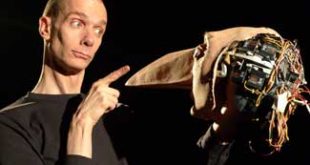