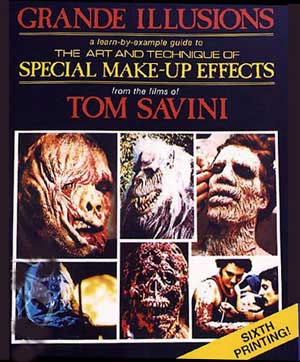 Hell-o, gore hounds, Horror Fanatics, information sucking maggots and most of all, fellow Special Effects Artists. This is a Special, Double Creature Feature Grind House type of book review. The books are actually in two separate mediums, but are the same book in a reader’s perspective. Instead of reviewing them separately, this is for both books, all wrapped into one review. For the full effect, you should purchase them both as well.

If you were as curious as I was as a child on how most of your favorite monsters were brought to life or kill scenes were executed… consider this the unholy grail of Horror. A key to the secrets of Special Effects make-up, monster/ mask making and any other gruesome aspect and artifact that you can think of… described in every little gory detail by the GOREfather himself, Mr. Tom Savini. The one dude that has been a lifelong idol of mine and I was given the opportunity to hang out and work with almost everyday for over a year. A dream come true. This is the collective “Workbook of a genius (-Movie/ Entertainment Bookclub), “a classic and will remain so… Tom Savini has done a superb job on this book and deserves sincere and genuine praise for bringing it to us (-Research Council of Make-Up Artists).” Now, I bring a little of both parts to you. This is the two book instructional masterpiece, collectively known as Grande Illusions.

I was lucky to receive personally signed copies of both parts for free and directly from the Author himself, upon arriving at his Special Effects course in ’03. It is reading that I will always hold dear. This tells two part series of biblical proportions is a must have for the aspiring Special Effects Artist. Even for the seasoned professional. I have been doing it for going on seven years now and this series has helped me along the way. Not to mention the sentimental value it possesses.

The first part opens with two introductions to let you know that you are dealing with something special. The first introduction is called Special Make-Up Effects and the Writer. It is written and brought to you, the constant reader, by none other than the King, himself… Stephen King, of course. Mr. King talks about the importance of a Special Effects Artist as he imagines his visions from his head, onto the screen. He mentions The Shining, Creepshow, The Thing, Poltergeist, Dawn of the Dead, The Exorcist and the importance of making each of these films come to life. This is also including the costs of production.

Before you get into the book, it’s only natural for a foreword by the Author, himself. This book is no exception and written by the general rule. He opens his personal introduction by saying, “let’s talk about gore and me.” That sounds like an attention grabbing first line for any fan of Horror to me. It certainly caught mine. Tom talks about how he first got interested in the field after taking photos of actual atrocities in Vietnam. He was inspired by The Man of A Thousand Faces. It was the story of Lon Chaney. On this very day, his life took a different direction. He sent off for his first make-up kit as he was stationed in Vietnam.

He then created beards, mustaches and fangs for some of the men he was stationed with. He then goes on to mention the films which got him started, such as Dawn of the Dead and Friday the 13th. He then goes on to say that with the slew of slashers that followed, he was glad to get away from the gore and into the monster realm a little bit more. Also, some of his titles are discussed… such as “The Gore King” and “The King of Splatter.” He said just as he wears these labels, he is not in fact a gore monger (such as your’s truly). During the end of the foreword, he gives us the definitions of an illusion and most of all, an Illusionist. With that being said, we go into the first part… Pre-Production Sketching.

During this somewhat introduction into each of the films he worked on and how he pulled the effects off, he describes the pretext to getting started. The pre-production sketches. The basic idea that you get as you draw it out on paper to later be constructed and animated just as your mind had imagined. This procedure is to get a visualization of the beast or victim you are about to create, before doing so. Some are better than others when it comes to illustration. Some choose to go this route and some do not. Just as with storyboarding scenes. Some find it easier to just execute the task as they go along. I, myself, cannot draw a straight line on paper to save my f*cking life. Therefore, I absolutely understand what Tom is saying, but I usually just wing it as I go. He seemed to enjoy some of my work when taking this route, which is not necessarily forbidden in the eyes of the masters.

He then goes into the supplies in which you will need to get started and even the place to find them. He also lists a sample of other books that you can get to help you along the way, such as Dick Smith’s Monster Maker Handbook. A little bit on making acrylic eyes are explained and then onto the first feature of the book (from here, each chapter is named after the movie in which he is referring), Deathdream. In this segment, he basically describes the process of casting monster teeth and fangs. The last page of this segment has the complete make-up from the film.

Next, we have the art of dead flesh. The film of course in which he is referring to is Deranged. He explains the task of getting Ezra’s mother mummified and all ready to come out of the grave. This film is one of my personal favorite pieces of Tom’s work.

Then comes blood tubing and flash desecration in the George Romero classic of a human vampire, Martin. Here, Tom explains how to run foam latex. He also goes over how to run the tubing effect for cutting your (or someone else’s arm open).

Up next, we have a little more well known Romero work for you, Dawn of the Dead. Tom explains the way of making wound appliances to go on the actor. He also goes over the cutting of the machete to place it on the head or neck, along with the blood pumping to finally sell the effect on screen.

Following the “Dawn” chapter, there is a special segment added on casting a head. This shows you how to cast from scratch and follows through on every step of the way… all the way to running the tubing to sell the effect. For this particular gag, it is a chopped off cranium, complete with the crimson gusher. Right after this is another special segment on color plates. There is also a booklet within the book full color and black and white photos from Dawn of the Dead, Deranged, Martin and Friday the 13th. This leads up to our next chapter (but nowhere near “the final chapter”). If some of you may have already guessed, it’s Friday the 13th.

Tom goes over everything from arrows in the eyes and chest, to cut throats. He also explains the creation for the effect in which brings Kevin Bacon to his death. The infamous sphere through the bed and chest gag. We then see the ax in the head trick, the decapitation of Mrs. Voohees (Betsy Palmer) and finally, the make up appliance straight from the life cast of her beloved hydro cephalic son, Jason Voorhees (Ari Leahman). This also includes rare photos of the on-set appliance to transform young Ari, to young Jason.

Next, we have another one of my personal favorite Savini jobs, Bill Lustig’s Maniac. Tom shows the bloodthirsty reader and curious effects artist how to pull off a scalping like no other, complete with pulling off the scalp itself. He goes step by step from life cast, to the final peeling back of the scalp. There are also on set photos with the star, Joe Spinell and one of his unfortunate victims.

Next, we have Eyes of a Stranger. Here we are taught how to make a bullet hole. We are also shown the severed head on top of the bookshelf gag. He also explains more techniques in blood tubing for those sharp and dangerous instruments of Hollywood magic induced death.

Then comes more face deformation and brutal death with the classic, The Burning. He shows how the face of evil was formed and ultimately came to it’s demise with an ax planted right in the middle. He then shows the art of chopping off the fingers. There are on-set photos here as well as diagrams of the molds and proper ways of pulling off the effect.

The bloody secrets behind the slasher classics keep coming with The Prowler. Tom begins by explaining how he pulled off the effects for the “pitchforked lovers.”He then describes the infamous bayonet through the head bit. He goes on to explain a creative way to cut a throat and what he calls “the double barrelled surprise” at the end of the film. This, as usual, is shown from the genesis stage, up to the very end. Black and white photos from the set and of the life casts accompany the chapter as well.

No Savini collaboration can be mentioned without this one… The melding of three pioneering master minds in the business. The horrific comic book come to life by none other than George A. Romero, Stephen King and Tom Savini. I’m talking about the classic monster of these three masterful Horror minds called Creepshow. Tom shows the beginning diagrams of Fluffy from the segment entitled The Crate. He describes in detail the making of the mask and hands. From building to applying the beast to the actor. We then learn the making and controlling of the mechanical corpse bride (and not the Tim Burton film). We then see her counterpart, Nathan Grantham(which I very proudly own a pour of). We see from his zombified birth until the decapitation in which he finally gets his cake that he wants in the film. This chapter has the most pictures. It also includes one of another one of my (absolute favorite) teachers in the Special Effects industry, Jerry “what the f*ck?!?” or “Shut the f*ck up!” Gergeley… (Dawn of the Dead, Dark Craving/Heart stopper and Stephen King’s The Dark Half…among many others). There is also another shotgun blast execution described in the completing chapter of the book. As always, there are plenty of tasty pictures from the set that visually guide us through the process in a movie sort of fashion. After the final chapter comes to an end, there is a scrapbook of some of Tom’s most acclaimed make-ups, family photos and more on-set photos with the casts of each individual film. All are not included here. That would be too much for this segment to handle, as it is formatted like it is actually a scrapbook, complete with captions…

For a complete list of everything I’ve reviewed and upcoming book releases, check out my page at www.myspace.com/headlinesnovel. Look for the Horror Anthology, Moral Horror (featuring Edgar Allan Poe and Jack London), coming to a bookstore near you on October 1st. Available now for pre-order at Amazon, Betterworldbooks Barnes&Noble, Books-a-Million, Borders, Powells and Target.com….