Every time I turn on the news I see another city or state with a state of emergency warning for a winter storm.  Even here in Colorado we got a big snow storm over the weekend (for which I had to be in an airport for 14 hours due to delays…).  So to honor the snow gods I decided to sift through my horror collection and find my favorite snow filled horror films.  So make a fire, or in my case turn on the gas fireplace, make some popcorn and scare yourself silly while the ice age rapidly approaches outside your window.

My father spent some time in Alaska and he told me about the winters and how sometimes he wouldn’t see the sun for 4 months.  So this film made me think about how awful it would be to live in Alaska even without Vampires trying to eat me.

This film came out right at the beginning of the Vampire craze when Vampires will still considered cool and didn’t shimmer in the light. The movie is about a small town in Alaska that is preparing for the time of year when the sun doesn’t shine for 30 days.  Just before the last boat is about to leave the town a crazy man warns all the people that death is soon to come.  But no one listens and the last way out of the isolated town leaves, leaving the towns people isolated.  Soon a pack of Vampires come into the town and begin killing people left and right.  The film is action packed and the soundtrack is wonderful.  Not the best Vampire film I have seen, but it has a few scares throughout making it worth seeing. 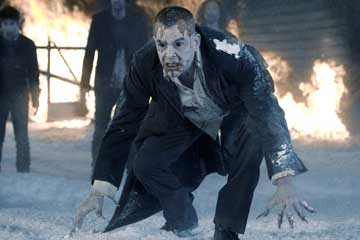 Speaking of Vampires, we move on to a Swedish gem that is more drama then horror.  But despite this fact it’s a great movie that really pulls you into the characters.  The movie is about a young girl who moves into an apartment complex in the dead of winter and befriends her next door neighbor.  Throughout the film you find out that she is actually a vampire and the man taking care of her is killing people so the girl can drink the blood and survive. You also watch the friendship between the boy and the girl develop into something beautiful by the films end.    This is a must watch for any horror fan.  There is also an American remake Let Me In which I have not seen, but have heard that it follows the original very well. 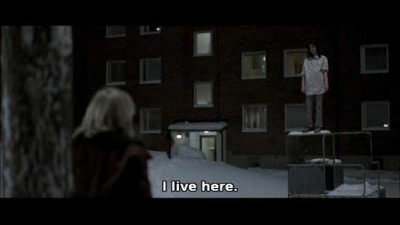 You can’t have a list about winter movies without putting this one on your list. This Stephen King classis is the mother of all winter horror films.  You have a family who is about to be the caretakers for a mysterious hotel in the mountains as it shuts down and is snowed in for the winter.  This film has a special place in my heart because the hotel is based on the Stanley Hotel in Estes Park Colorado, my home state.   Now I would go on in further detail about what this movie is about, but if you haven’t seen this movie then you probably shouldn’t be on this site.

Stephen King must really like the winter because here is another one of his books made into movie form that is also about winter and being isolated in the snow.  However, unlike the classic horror that is The Shinning, Dreamcatcher takes more of a sci-fi approach by adding in alien like creature to the mix.  Now I won’t spoil the film and tell you where the aliens come from, but I will say that bad gas and stomach pains have something to do with it.  Throughout the film there are a few jumps and scares, but the majority of this movie you are simply grossed out.  If you were a fan of The Human Centipede then you will certainly love this movie. Oh and Morgan Freeman is in it too with the biggest eyebrows I have ever seen.

Two words, “Zombie Nazi’s” that’s right, this Norwegian horror/comedy film is all about Zombies, who are also Nazi’s. The film is basically Shaun of the Dead, but In Norwegian.  It’s about seven students who stay in a snow covered cabin in the woods while on vacation.  However, it is not too long before the students realize that they are not the only ones in the woods.  They soon encounter the very humorous Zombie Nazi’s.  These Zombies act like any other Zombie you have seen in films before; they crave brains and walk really slow.  But despite this fact, none of the students seem to be able to properly fight off the Zombies.  One student even gets bit in the groin making for a very humorous moment in the film.  If you are in for a good laugh while watching Hitler’s undead Reich chew on some student balls, then be sure to watch Dead Snow.

I am a firm believer in the idea that to call yourself a horror fan, or even a fan of any genre, you need to watch all the classics. The Thing from Another World (the 1951 original) is one such classic for horror fans.  The film is about Air Force men stationed in the North Pole who see a strange aircraft fall from the sky.  Upon further investigation the men discover a giant body of a being frozen in the ice.  After extracting it, the body thaws and comes to life.  It begins attacking the sled dogs and feeds off their blood. The men soon discover that this being is actually a plant form and they extract seedlings from its arm that was bitten off by a dog.  The being in this film looks more like Frankenstein than a plant person, but still, it is a great horror film for the early 50’s.  You can watch the John Carpenter remake of this film, but really if you want to get the real experience you need to watch the original.

When I first heard about this film debuting at the Toronto International Film Festival I had to check it out.  Now while this isn’t the best horror film I have ever seen this is definitely one that I enjoyed watching and eventually bought to add to my collection. The film is about environmentalists working at an oil drilling base in northern Alaska.  The team soon discovers the body of one of their teammates dead in the snow.  Strange events start happening and people begin to think that the oil contains gases which are causing hallucinations and crazy behavior.  But then more members of the team find out that the ghosts of the fossil fuels (yes dinosaur ghosts) are the ones causing all of the strange events.  I won’t ruin the end for you because I think this film is good enough that you (my readers) should watch it and find out.  And if the plot alone hasn’t convinced you to see this film then maybe the fact that Ron Perlman is the lead will.

Now about the only good thing I can say about this movie is the fact that it has Emily blunt in it and DAMN is she fine to look at!  But just by looking at the information on this movie you might think that it is going to be great.  It stars Emily Blunt and was produced by George Clooney and Steven Soderbergh.  However, those are its only redeeming factors of the film.  This movie is about a young girl (Blunt) who is going home for Christmas break and gets a ride from a man who goes to her school whom she found through the ride bulletin board.  But after the man takes a shortcut and crashes the car in the middle of nowhere, ghosts start to appear.  Soon the two find out that every winter there are freak accidents on the road and that the ghosts of those killed stay around to collect more souls on the road.  Now since I don’t think you need to see this movie I will spoil the ending for you if you want to keep reading.  The boy is killed by the ghost of a Sheriff that had died and then when the Sheriff is about the kill the girl, the ghost of the boy comes in and kills the sheriff’s ghost.  The boy then leads the girl through a shortcut to safety. 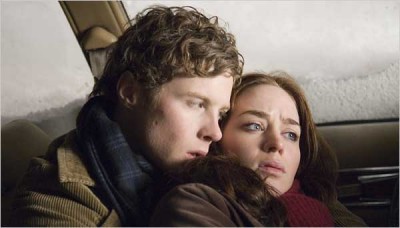 Now my readers, I want to know what your favorite movies are to watch while your town is covered in ice and you tell work that you’re “snowed in”.  Leave your favorites in the comments below!