SYNOPSIS:
“In 2012, amid economic chaos and high unemployment, Americans by the millions watch criminals with life sentences race armored cars on Terminal Island. Two-thirds of the combatants die but the winner may earn his freedom. On the day he loses his job, steelworker Jensen Ames is arrested for his wife’s murder. Sent to Terminal Island, he’s offered an out by the steely and manipulative Warden Hennessey – race as the popular mask-wearing (but now dead) champion, Frankenstein, or rot in prison. Jensen makes the bargain. As the three-stage race approaches, he realizes that the whole thing may be a set up – can an anonymous man behind a mask get revenge and win his release?” (courtesy IMDB)

REVIEW:
Instead of resisting the incredible influx of sequels and remakes, I now simply hope for the best and expect the worst. I think prolific producer Roger Corman, coming to the end of an amazing career, feels much the same. He doesn’t seem to care much what Hollywood does with his old properties. I believe he accepted a hefty price just for his title The Fast And The Furious (1955), allowing the Powers That Be to produce a film that had absolutely nothing to do with his original fugitive-on-the-run story. If it wasn’t for the presence of Vin Diesel, The Fast And The Furious (2001) would have been a complete flop, but I digress. 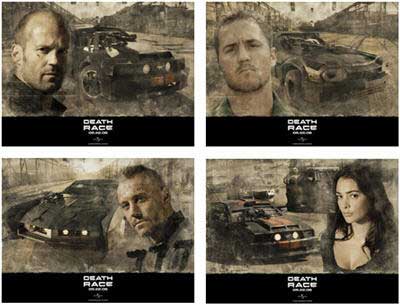 I just watched the new Death Race (2008), a supposed remake of the Corman-produced Death Race 2000 (1975), hoping for the best but getting the worst. On the ‘best’ side we are presented with some violently fun car chases in a near-future dystopia inspired by both Death Race 2000 and the Stephanie Rothman cult prison film Terminal Island (1973). But this is out-weighed by the ‘worst’, most disappointing being the lack of humour and political subtext that was so important in the 1975 film. Let me refresh your memory: The US government sponsors a race in which contestants of both sexes drive across the entire country, picking up points by running down pedestrians and threatened by rebels trying to put a stop to the race and the corrupt government that sponsors it, concluding with the American President being killed, a possible first for a fictional film. 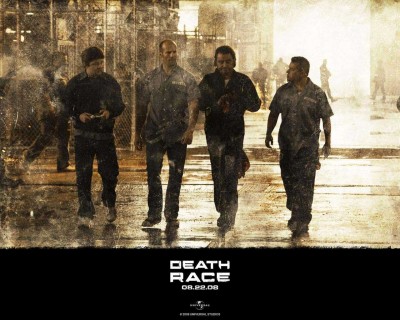 So, a race organised by a privately-run prison that goes around the same enclosed track nine times seems pretty lame by comparison. Completely gone are the rebellious freedom-fighters and, most importantly, the infamous points-for-pedestrians system which made the original film and the seminal short story by Ib Melchior so memorable. Even today, just about everyone who has ever traveled in a car has heard or made a joke about scoring points for pedestrians without really knowing its origins. Also on the ‘worst’ side of the recent Death Race is the time wasted introducing the hero (Jason Statham) who eventually assumes the mask of legendary driver Frankenstein. Framed for the death of his wife, we are forced to endure the usual prison-movie pleasantries before we are introduced to his driving coach (talented Ian McShane is wasted) and pit crew.

Again, this simply does not compare with Paul Bartel’s 1975 original, in which driver Frankenstein (David Carradine) is introduced to the audience as an enigma, his history and motives eventually revealed as the race continues, surrounded by other costumed characters played by interesting actors like Sylvester Stallone, Mary Woronov, Fred Grandy, Louisa Moritz and Roberta Collins. Their highly entertaining chats and spats are sorely missed in Paul W.S. Anderson’s remake. 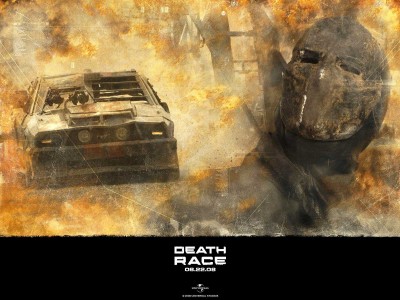 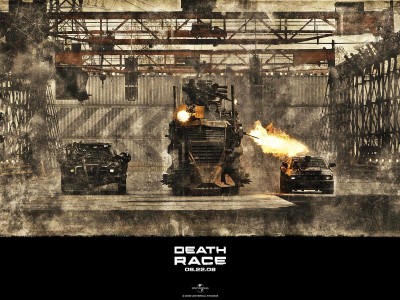 I believe Arnie’s The Running Man (1987) and the Wachowski Brothers Speed Racer (2008) might have more elements of the original Death Race 2000 than this current remake. Apart from Ian McShane’s asides, it is extremely dry and would have benefited from a director more experienced with subtle satire such as Paul Verhoeven, or even John Landis, who was actually on-set during the filming of the original. Thanks for reading, I just had to get that off my chest. Please join me next week so I can poke you in the eye with another frightful excursion to the backside of Hollywood, filmed in glorious 2-D black & white Regularscope for…Horror News. Toodles!