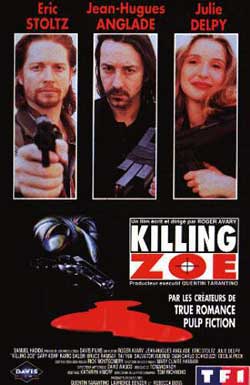 An American safe-cracker (Zed) meets up with an old friend (Eric) in Paris. Eric and his gang have planned to rob a bank in the city which is open on Bastille day. Unfortunately, Zed is trapped in a situation beyond his control when heroin abuse, poor planning and a escort named Zoe all conspire to turn the robbery into something Zed wasn’t prepared for…

It’s f*cking miserably cold here in NY where The Black Saint has his east coast mausoleum (I’ve got em’ all over) and there is so much snow on the ground (with more to come) that most of the city is suffering & crying out for relief. The Saint LOVES this sh*t! I love the cold weather, I love the snow, I love to hear the collective moaning of the masses. My acolytes are working the streets right now, offering warmth & dryness to those who want it, all they have to do is worship me..unequivocally. This is the best time to recruit new acolytes you know, when their resistance is (to quote The Beastie Boys) “Slow & Low”. Unfortunately, I have a job to do once in awhile. I have to watch movies of all types & let you know if they’re worthy of your time. Today’s entry? Roger Avary’s “Killing Zoe” (1993)

In the early 90’s Roger Avary was a name with some pop behind it. His involvement with Quentin Tarantino & Lawrence Bender made his name particularly hot since he co-wrote “Pulp Fiction” with QT & both Bender and Tarantino executive produced this, Avary’s directorial debut from his own script. It had a lot of buzz behind it while in production but when finally done & released it landed with a resounding thud at the box office. Which is too bad because although it can be said that it is very similar to “Reservoir Dogs” & “Pulp Fiction” in terms of the way the dialogue flows, it is it’s own creature. Perhaps too little star wattage on the screen doomed it to be ignored by the moviegoing public.

Eric Stoltz stars as Zed, a safe cracker who flies to Paris a few days before Bastille day to help an old friend of his by the name of Eric rob a bank. You see, Zed is a safe cracker & Eric trusts him implicitly. Eric has a crew that works with him & it seems that all of them are on Crack & other mood altering drugs. As a matter of fact at on point early in the film Eric informs Zed that he has Aids from shooting up so often. We meet Zed as he arrives in Paris & makes his way to his hotel. Zed speaks no French so initially he has problems communicating with the cab driver, the concierge, the bellhop, etc…but he has no problem communicating with the “Escort” who arrives at his room a short while later, Zoe. Played by Julie Delpy (“An American Werewolf In Paris”), Zoe is an absolutely stunning beauty who has alabaster skin & an amazing body to go along with it. They negotiate a price & then do the deed as Murnau’s “Nosferatu” is playing on the TV. It’s as if Max Schreck is watching the two of them as they do the deed. It’s a tastefully done scene.

As the two of them bask in the afterglow on the bed, they talk about what they do. Zoe is a student who does not consider herself a whore. She’s just making some money on the side as an “Escort” to help her pay for her studies. She is studying art & is passionate about it. Zed is pleasantly surprised by her secret & they proceed to have a nice conversation about their lives when in arrives Eric who promptly proceeds to throw Zoe out of the room sans her clothes proclaiming her a whore. Zed tries to intervene on Zoe’s behalf but Eric will have none of it, although he does give her back her clothing. Eric soothes Zed by inviting him out to meet the gang & to tell him about the heist. Eric’s gang is a motley crew of miscreants who all seem to do nothing but ingest drugs & drink profusely.

None of them really stand out save for Gary Kemp who plays Oliver, an Englishman who has fallen in with Eric’s crowd. He seems to be the calmest of the bunch & has a great scene where he describes his love of Blues music & Viking films to Zed, actually inviting Zed over to his place after the heist to watch some Viking movies together. Is it a come on? The drugs? The booze? We’re never told but Kemp plays the scene so sincerely & innocently that it does seem like he really just wants to hang with Zed & nothing more and this is important because Zed is isolated from the rest of the gang in both language & behavior, unfortunately the relationship between Zed & Oliver isn’t given a wider berth. Eric & the crew keep giving Zed different drugs the whole night long & Zed’s state of consciousness is constantly altered throughout the night culminating in a pink capsule that Eric makes Zed ingest which pushes him over the edge into unconsciousness as he sees Eric having sex with a hooker literally right in front of him before he passes out..

Eric informed Zed that Bastille day is tomorrow as they were getting high & although Zed initially resists because he hasn’t seen the bank or the safe yet, eventually he relents & prepares himself for what should be an easy job. No muss, no fuss, Just untold wealth awaiting all of them. The next day, although Zed has a bruising hangover, the gang gets in their car & proceeds to make their way into the bank. They wear odd, bejeweled masks for the heist which they begin to complain about almost immediately after raiding the bank. Too hot for them too keep on they complain, but they don’t remove them. Just yet anyway. The gang bursts into the bank guns ablaze & immediately kill some of the bank’s employees (amongst them, p*rn star Ron Jeremy) to get their point across as Eric escorts Zed downstairs to the safe to get started. Unfortunately for them, they don’t notice Zoe is an employee of the bank & she seems to recognize Eric & Zed despite their masks.

This is where “Killing Zoe” gets nutsy. Apparently one of the employees managed to sound a silent alarm before being slaughtered and before you know it the Police arrive & they are in no mood to negotiate. All of this is taking place upstairs as Zed is way down under, oblivious to all the carnage that is taking place upstairs. Eric just assures him that all is well & he should just keep on doing what he does best. Eric Stoltz gets top billing in “Killing Zoe” but the real star of the film is Jean-Hugues Englade as Eric. He gives an absolutely manic performance, just getting angrier & crazier by the minute. Director Avary had pronounced that the movie unfolds in a “Non Reality” that is a metaphor for all of the characters mindsets. The inside of the bank represents Eric’s brain. The further down into the labyrinth of vaults you descend the more confusing they become, paralleling Eric’s slow, but steady descent into madness. He even had the walls of the lower levels painted in various shades of red that get deeper as you go further down into the bank. Anglade quite literally tears up every scene he’s in & since he’s in most of the film his character is the one that stayed with me the most. I could see echoes of Gary Oldman’s character in “The Professional” in Anglade’s Eric. As a matter of fact I could see Oldman himself playing the role quite adroitly if the production could afford him. There’s also a touch of Pacino’s Tony Montana in Eric as well. Anglade is so ferocious that he just blows everyone else off the screen whenever he’s on it. It is a great but sadly underseen performance.

As all hell is breaking loose upstairs (one of the bank employees has a gun hidden on his person & proceeds to fire wildly at the robbers, killing one of them & wounding another), Zed has gotten through the biggest obstacle in front of him: The Safe’s outer door. As both he & Eric (who still hasn’t told Zed what’s happening upstairs) open the door they find another smaller door with a much smaller lock on it that Zed claims he can jimmy open in 3 minutes but as they approach the door, bullets fly out of the window on the door. There’s a employee in there & he’s armed as well. So now there is chaos upstirs & downstairs & while Zed is kept unaware of the mess upstairs Eric just keeps getting loopier & loopier as he goes back & forth between the two messes thinking he can figure a way out with the bounty they’ve worked so hard to attain. And there’s still Zoe upstairs to think about as well as the police surrounding the bank, What to do…what to do?

“Killing Zoe” is a really good movie but ultimately a bit too reminiscent of “Reservoir Dogs” in the end to make it stand out on it’s own. Avary has learned his lessons well from Tarantino’s film & almost slavishly adheres to it, to the film’s detriment. It’s not that it isn’t exciting because it is. It’s a funny film as well & all of the performances stand up well under scrutiny. It’s just that it has a “Been there, done that” sort of feel to it. Perhaps this is why it failed at the box office, coming on the heels of “Reservoir Dogs” & “Pulp Fiction” which it apes as well. But I’d still recommend it because the only person around making this type of movie is Tarantino, the genre belongs to him. So this film can be looked at nostalgically as one that tried to jump on the bandwagon but couldn’t stay on it. Much like Tony Scott’s sadly ignored “True Romance” (which was also written by Tarantino). There were too many of these films coming at the same time to really pay much attention to all of them I believe, unless they were directed by QT. His participation as a producer or screenwriter just didn’t seem to be enough for moviegoers back then. It seemed to be that The public wanted all of him or none of him at all.

Which is too bad because “Killing Zoe” for all of it’s failure to stand out is still a pretty good movie. It’s worth watching for Anglade’s performance alone although again, all perfs are good. The Black Saint gives “Killing Zoe” 2 1/2 shrouds out of 5. It would’ve rated higher if it was first but it wasn’t so it comes off as a wanna be & not an originator. But it’s a good wanna be, make no mistake about that. And by the way, when is some studio going to take it’s head out of it’s ass & produce Avary’s epic “Phantasm” script? The “Phantasm” series never ended properly if you ask me & what was considered too expensive then can be done more reasonably now I believe. Let’s get on it people! The masses (and The Saint) are anxiously awaiting this long praised but never produced script to make it to the big screen & end the “Phantasm” series in a proper manner! And with that, The Saint has now left the building!!