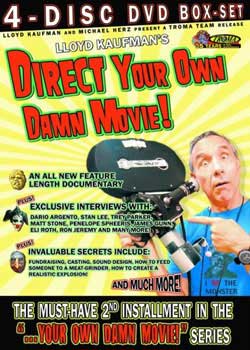 Studio? You don’t need no stinkin’ studio! Or at least that’s the gist of Troma Entertainment president Lloyd Kaufman’s message in this how-to series that includes interviews with directors such as Dario Argento, Stan Lee, Trey Parker and Matt Stone. Over the course of the program, you’ll learn the ins and outs of writing a script, mastering the preproduction process, casting, on-set management, post-production and distribution.

“Direct your own movie” is quite a collection. With 4 DVD’s clocking in at 300 minutes, this is alot of viewing. The purpose here is to educate, inform and showcase the world of filmmaking…namely directing and producing. Creator Lloyd Kaufman set out to inform the viewers on how a film gets made and directed.

In doing so, he was able to get a whole range of talent to contribute their thoughts on screen. Anyone who is “even” considering directing there own film needs to watch this. It’s down to earth, truthful and informative from the mouths of those doing it themselves. Who is that range of talent? Well for starters we have multiple commentaries and interviews from Stan Lee, Trey Parker, Matt Stone, Dario Argento, Ernest Dickerson, Eli Roth, William Lustig, Penelope Spheeris, Stuart Gordon, James Gunn, Mick Garris, Monte Hellman, Joe Dante, Herschell Gordon Lewis, Jenna Fischer, and so on….good enough? I think so!! But that’s only the tip of course.

Eli Roth gives an incredible lengthy interview that gives it as straight as you need about the pains and struggle of filmmaking. You can tell from his interview alone that its something he is passionate about and completely gets. This kind of info is priceless and inspiring.

One surprising addition was the appearance of “The Office” star Jenna Fisher. Jenna who probably most of us were unaware got some of her start by directing her own film. And a Troma owned one at that. She has some good things to say which strangely elevates her over just the “office girl” role we are used to seeing her play.

They all offer advice, advice of the times, and some back stories of what they did to get there themselves. Lloyd Kaufman adds to this cheap ways to get movies done even if that means recycling your own material. As a the master at Troma, we get some insight on how Lloyd goes about it. This is great stuff friends! I wish I had this a few years back.

The collection itself is kept interesting. So we rise above the usual cut to cut interviews with footage, camera angles, clips from films and a variety of stuff that you’d expect from the Troma team. There is possibly too many points in this film to address in one review but I’ll do my best to give you a taste. Some of the subjects covered include “caring about the characters”, what it means to have a workable great script”, “moving to where the action is”, “climbing the ladder of filmmaking into success”, thinking thru your shot days ahead of time”, rehearsing”, recommendations…and so much more.

There is so many bases covered that this set could easily be transcribed into a book. As you dig into further DVD’s you get a whole lot more. …

In fact this pack is loaded! 2 additional feature length documentaries are included: “Poultry in Motion”, and “The Thin Brown Line”. Though don’t stop there as Troma has included “Lloyd’s home movies”, Lessons from the set of Crank 2″, “Lloyd’s louse up” “Slithering thru Hollywood”, an exclusive interview with Jenna Fischer”, an interview with Dario Argento” and heck too much more to list really. Think of it as instead of a film as a huge collection of extras produced for the purpose of this collection.

And add to that Lloyd has alot of fun with the material. On one hand there is classic Troma-isms for fans of the films…on the other, you need to ask yourself “Are you a filmmaker?” If yes, is the answer then you’ve got a complete course of training with one of the masters. Now I think it goes beyond saying that no Troma library would be complete without it………. though with 300 hours…you can’t go wrong. Let Mr. Kaufman be your guide into the smart, absurd and even cost saving arena’s