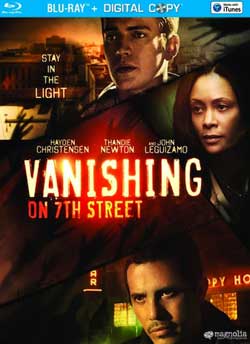 When a massive power outage plunges the city of Detroit into total darkness, a disparate group of individuals find themselves alone. The entire city’s population has vanished into thin air, leaving behind heaps of empty clothing, abandoned cars and lengthening shadows. Soon the daylight begins to disappear completely, and as the survivors gather in an abandoned tavern, they realize the darkness is out to get them, and only their rapidly diminishing light sources can keep them safe.

Stop the presses! The Black Saint has gone to his first official horror movie of 2011 (“Gulliver’s Travels” was horrible but not a horror movie per se). Nope, I got invited to a private screening of “Vanishing On 7th Street” & I’ve been anxious to see it ever since I saw the trailer for it last year. But maybe I should learn to curb my anxiety just a bit in the future…..

Director Brad Anderson, who directed the awesome “The Machinist” & “Session 9” goes for something a little different here. “Vanishing..” is more of a horror piece than those two films in my opinion but is nowhere near as disturbing as they were either. It stars Hayden Christensen as Luke, a news reporter who wakes up one morning in an unnamed city to find that all the electricity is out in his apartment but more disturbingly he finds out that no one is around either. The entire population of the city has apparently vanished from wherever they were standing. Just POOF! And they’re gone, leaving their clothing and personal belongings right on the spot where they vanished. He gets dressed & goes downstairs to find the streets filled with clothing & cars strewn all over the street around him.

As a matter of fact as he’s walking down the deserted streets looking for an answer, an airplane crashes about 10 blocks away from him in the distance in a scene very reminiscent of “Pulse”. We’re also introduced to John Leguizamo as Paul, a movie projectionist who is working at a multiplex in a mall when the lights go out. Thandie Newton is also introduced as Rosemary, a physical therapist who is taking a cigarette break when the world goes dark. After the introduction, the next scene has a title that reads “72 hours later” and we find Luke running down the street at night with a necklace of flashlights surrounding his neck. He is frantically trying to find a car that starts but none of them do. All of their batteries are drained of power as well. But why? Luke doesn’t know, but he does know that there is something in the dark. Actually the dark IS that something. The dark is seemingly alive & trying it’s best to envelop all human life (animals are apparently impervious..) and once the darkness gets you..POOF! You’re gone…

He actually finds a car that has enough juice to turn on it’s headlights for a bit & as he tries to start it he’s startled by a man on a bike (nice cameo by Larry Fessenden) who’s begging to be let in the car. Luke denies him entry & the man frantically begs him for some light, which Luke also denies him. The man turns his back to the darkness that’s rapidly encroaching upon him & tries to outrace it on his bicycle only to be caught & POOF! He’s gone too. Luke, seeing this & realizing the car won’t start decides to make a run for it when he hears some loud blues music playing in the distance. He runs for a few blocks with is lights beginning to dim & the dark catching up to him when he happens upon a bar called “Sonny’s”.

He goes in to find a completely empty bar, except for the clothes that everyone was wearing when they went POOF! (I like typing POOF! if you haven’t noticed by now, it’s kinda fun). He helps himself to a few drinks & finds out that the lights in here are working because of an emergency generator in the basement. It’s there he finds young James, holding a shotgun & warning Luke not to move or he’ll shoot his head off. Of course, eventually they figure out they’re in the same boat & have to figure out what’s happening & why they’re still alive when apparently no one else is. Both Rosemary & Paul end up at the bar as well, Rosemary made it by wearing glow sticks around her neck & Paul wakes up in the street bleeding from the head wearing the light that was strapped to his head when he was in the theater running the projector. He wakes up screaming for help & is rescued by Luke (against his better judgement by the way).

Paul claims to have been hit from behind only to find himself bleeding in the street 3 days later. That plot thread is ignored immediately after it’s handed to us, leading us to wonder how he got to where he is & who hit him if anybody?

So now we have four survivors who are in a well stocked bar with a basement full of emergency supplies & gasoline to feed the generator wondering what the hell happened & how they can get out of it alive. It’s here that the movie starts to fall apart. In actuality, although the story does generate interest initially, certain situations arise that made me wonder “Why would they do that”? And once I started thinking about those situations I started thinking about what had already happened & started to wonder how any of these people (save James, who was in a fully lit bar with a working generator when everyone else’s lights went out) made it to the bar at all…but it is interesting.

Oh! And did I mention the little girl walking around in the darkness seemingly unaffected by the darkness although she looks to be about 5 years old & only has a dinky little flashlight that doesn’t seem to be going dim like all the other battery operated lights? The little girl that runs INTO the darkness whenever she’a approached? Yeah, I didn’t get her either until the end and even then I wasn’t too sure about who she was or might have represented.

The biggest problem with the movie is it can’t decide what it wants to be. It starts out as an apocalyptic disaster movie that kind of reminded me of a really good “Twilight Zone” episode. Even some of the music in the opening scenes is reminiscent of some “Twilight Zone” episodes (“Time Enough At Last” in particular).
Then it goes into a straight up horror film with something in the dark POOFING! people left & right. Then it turns into a character study once again reminiscent of an old “Twilight Zone” episode (“Five Characters In Search Of An Exit”) before it turns into a sort of religious homily of sorts with a totally unsatisfying & ever so slightly confusing ending. I can’t speak for all of you (except for my acolytes of course) but when a movie can’t decide where it wants to go & what it ultimately wants to be I get angry. Angry because I invested 90-120 minutes of my time into it & when it’s over, felt like that time was wasted.

There is an attempt to link what’s happening to the characters to an incident that happened in the late 1500’s. An incident involving the population of the colony of Roanoke, one of the first american colonies. Apparently, they all vanished at the same time & the only clue that was ever found was a word carved into a tree…”Croatoan”. Actually, that word appears in this film too but no meaning is attached to it so we still don’t know what happened to the people of Roanoke or what’s happening to the people in the film either. There is one other attempt to give the darkness some significance though. In Luke’s flashback, he is at his news studio & he finds a tape sent from a sister station in Chicago from someone claiming “Do not trust any light that isn’t in your hands” & “The darkness will play tricks on you & call to you in a voice you recognize”. The darkness does whisper throughout the film & it does take many shapes, including human silhouettes. But still, the vagueness of it all is very disappointing.

All of the characters have biblical names which may mean something, but although the whole “end of days” theory is bandied about by the survivors (amongst other theories) & the film’s penultimate scenes take place in a church, ultimately Brad Anderson wants the audience to make up it’s own mind as to what’s happening. I don’t think that’s very fair, especially since the first two thirds of the movie are as engrossing as they are. It’s in the final third that the characters, and hence the film, fall apart. All of them seemingly forget all of the rules that have been previously established & go off & do exactly what they shouldn’t. I realize that in film people sometimes have to do stupid things to further the plot along but it seems especially egregious in this film. There are some sly attempts at humor in the film (among the films playing at the multiplex: “Dark Town Black” & “Dark Invasion”), but overall the film has a very morose feeling to it. Which in actuality works in it’s favor. The atmosphere throughout the film is foreboding, threatening & depressing. Those factors along with some excellent cinematography & good performances by the actors (especially newcomer Jacob Latimore as James) help the audience become one of those survivors in a sense. I know at some points in the film I felt like the darkness was coming for me & I was unnerved by it.

But as what seems to be the norm lately with certain films, the ending leaves us with more questions than answers and that is frustrating. I was really hoping that their would be some big “reveal’ moment at the end of the film, much like “The Twilight Zone” episodes it seemingly emulates. But no, we get nothing but more questions & a rapidly setting sunset to leave us dangling in the wind. I hate f*cking endings like that. I really do. I think they’re pointless in the long run, why have an audience invest themselves into the storyline if you’re not going to end the story properly? I felt cheated. And I think most of america will too when this gets an official release.

All in all, The Black Saint gives “Vanishing on 7th Street’ 2 out of 5 shrouds. It gets one for it’s atmosphere & sound design. And one for the actors, who give it their all. But when all is for naught, you’ve wasted your time & the audiences time as well. Unfortunately for me,  “Vanishing on 7th Street” adds up to be a fascinating failure. 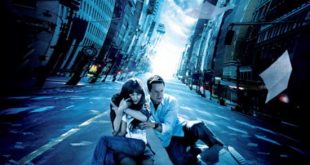