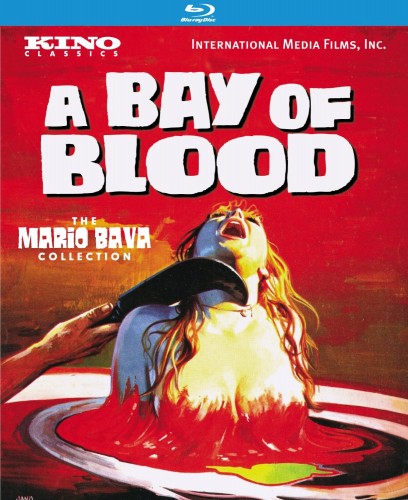 The wealthy Countess Federica (Isa Miranda) is brutally murdered and the
crime is made to look like a suicide. Someone has conspired to take control of her beautiful bayside estate and turn it into a resort to reap the monetary benefits. Little do the conspirators know that death is stalking them. Their greed is soon rewarded with absolute carnage. Brutal death awaits all who threaten the integrity of the bay. Who is responsible for these heinous acts of violence against those who would destroy this natural wonder? The body count rises as the bay swells with blood in this brilliant Bava brainchild.

WATCH THIS %$%*@ FLICK!
Mario Bava’s murder masterpiece Reazione a catena (Chain Reaction) has been known by many names; Bay of Blood, Bloodbath, The Last House on the Left Part II, and my personal favorite Twitch of the Death Nerve. It has been called “The Granddaddy of all Slashers” and “The Ultimate Giallo,” but I simply call it “The Shit.” This is one of my favorite films of all time. It is simply groundbreaking and revolutionary, as it changed horror films as we know them and influenced the emergence of the slasher genre. However, in Italy this is not considered a horror film. It is a “giallo” a mystery/thriller. While the subject matter is horrific and rife with gore, until it reached America it was never exploited as horror. Since it predates the slasher as we know it, it is also unfair to file it as an obvious slasher film. We horror nerds are many, and we all have our own opinions and basis for classification, so I find it acceptable to call Twitch of the Death Nerve, what I like to refer to as, a “bridge film.” There are some very important movies that are difficult to classify because they may have paved the way for new ideas and even created whole new genres. Like Psycho, and Night of the Living Dead, Twitch of the Death Nerve is a “bridge film” as it bridged the gap between European thrillers and contemporary horror. 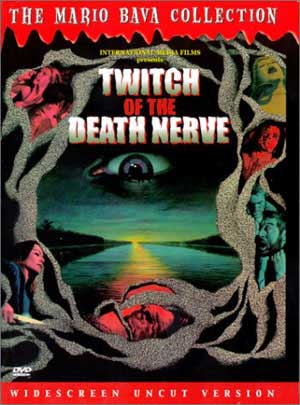 There are many reasons why I loved this film from the moment it ended, there are very simple concepts that wet my specific pallet for horror, but through further nerdish investigation I found that there were underlying plot themes and supernatural subject matter that I had not even entertained. As my expertise does not extend much further from our favorite genre, I read some other reviews and plot breakdowns by real Euro-film buffs whose overall knowledge would far surpass my own. So, on the greatest tool of the modern film geek, the interweb my investigation led me to some facts about this picture that one could only know after seeing various versions of the film in Italian as well as English. For instance, I was completely satisfied with the very random deaths and very unlikely killers in Twitch of the Death Nerve, and though I loved the mind blowing ending, I was unaware of how deep and intricate this story actually was.

The most important key to really soaking up the %$%*@ genius of the film is first to realize that the killer is actually the bay itself. Through understanding the artistry which Bava used to create the most elaborate mystery ever I was even more enthralled. Tiny clues in the dialogue, music, and imagery serve as a treasure map to the true identity of the bay as the culprit. It systematically dispatches all threats to it’s existence. Like other filmmakers of this era, Bava might be expressing ecological concerns as the bay kills in self defense. My favorite interpretation is that the bay has possessed various characters throughout the film and led them to remorseless, bloodthirsty butchery. This is one aspect that new horror has long attempted to forget, the aspect of the supernatural. Instead of the strait forward, give the audience the answers, approach; here we must enlist the help of our imaginations to find the true horror. Take some %$%*@ notes film makers. 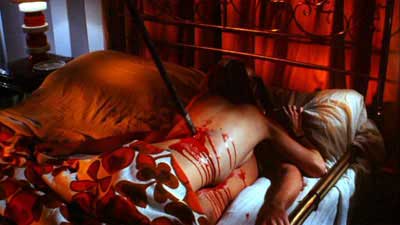 All that aside, Twitch of the Death Nerve is simply a kick ass horror flick. The score by Stelvio Cipriani is awesome, it goes from ominous and terrifying to melodic and brooding and then even uncomfortably light hearted. The imagery is amazing, and when watched closely tells more of the tale than the script could ever convey. Most notably, there is a scene in which the body of the murderous Count Filippo is uncovered to reveal itself in the grasp of a slimy octopus. The creature recoils to expose the Count’s discolored decomposing face. The octopus represents the bay, dictates it as the killer, and imposes the dark grasp it has on it’s victims. The effects, done by Carlo Rambaldi, are way ahead of their time. Twitch has landmark effects gags predating anything Savini and proving he did not invent a lot of the techniques he claims to. The kills scenes have been recycled into every slasher film since, and some are straight up ripped off, with good reason considering the quality and execution. The overall look and feel of the film is something we just don’t see anymore. The raw visceral shooting style of the day suggests true horror instead of the cheap “makes you jump” scares of today, and millions of Michael Bay’s dollars could never come close. 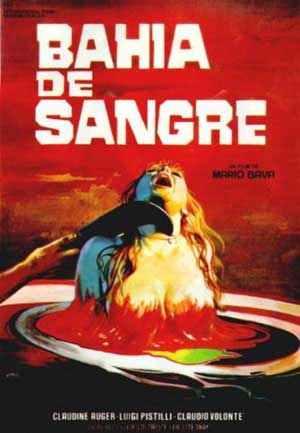 After the film was misunderstood by so many, Mario Bava himself called Twitch a “piece of sh*t” when he knew it was a “piece of art.” As with so many horror films of it’s time, it gives you a wonderfully shot but simple story leaving room for interpretation or further investigation. It doesn’t over-explain itself, but if you want to dive deeper and read the clues, they’re certainly there. I hear a lot of animosity towards this film and others like it. People have a hard time watching movies that are over 10 years old, and some can’t get past the poor audio and overdubbing of older European horror. I can’t see eye to eye with these sort of ignorant fans. If you don’t like this film, at least show some respect because without it you’d have no Friday the 13th to remake, considering Friday’s plotline and title is a direct homage to Twitch. All the uninformed masses that think Resident Evil and Devil’s Rejects is what encompass all things horror, pull your heads out of your asses, watch this film, and see what the horror genre truly is, and should be.