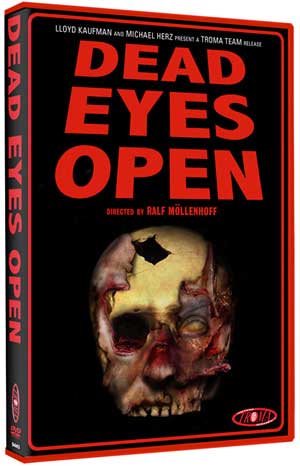 A small group of twenty-somethings make their way deep into the woods for a weekend camping trip when the zombie apocalypse begins. One by one they begin to fall to the increasing zombie numbers in the surrounding woodlands until only a few of the survivors are able to scramble back to civilization – if it still exists. Along the way they discover dangers beyond the walking corpses chasing after them.

Dead Eyes Open is a 2006 German feature filmed on a shoe-string budget and on Super 8 cameras, recently aquired and released in the States by Troma Entertainment. Written and directed by Ralf Möllenhoff for R.I.P. Independent Productions, the film is an attempt to recapture the grindhouse zombie films of the Seventies and Eighties. What they end up with is a headache inducing, amateurish aberration. The movie is dreadful, rarely rising to the director’s well intended aspirations. This may be the worst zombie film ever made. 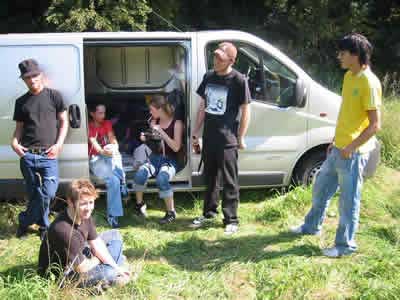 The acting in Dead Eyes Open is horrendous and underwhelming. The leads are week and unconvincing – anything they may have brought to the script is lost in the grainy film or poorly lit scenes. Even the zombie actors limp along without any conviction. A few of the cast manage to make a short lived impression, mainly the final guy and girl who manage to escape the woods and make it to a nearby farmhouse. Ironically, two actors introduced in this final act create characters of interest and produce the film’s single tense moment when they confront each other. The rest of the cast is reduced to overact through the script, most end up standing around woodenly with awkward shocked expressions. Legendary director George Romero makes a cameo appearance as an authority on the living dead seen on a television explaining the events of the day. 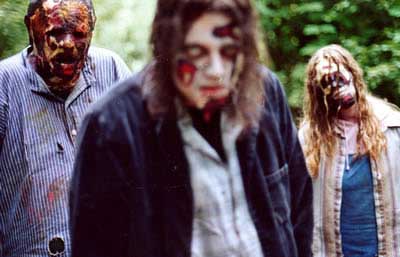 The zombie makeup is cheesy – sometimes poorly done grey-tones face makeup, other times caked-on zombie abrasions. Horrible. Most of the zombie staples are in place: the zombie bite closeup, the shot to the head and the zombie gut-munching frenzy. The later effect, when the zombies are pulling the innards from a recent victim is visually inferior but still gruesome; however, the very same effect is used again later in the film reducing any effectiveness it may have achieved. Regardless of the shock effects littered throughout, a zombie picture is dependent on the zombie make up but those found in Dead Eyes Open are mediocre at best and at times outright ridiculous. 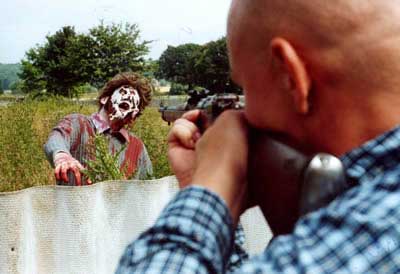 It could be commended that the director was bold to choose to film Dead Eyes Open in such a manner making the most out of a nearly non-existing budget. However, the result is inadequate and difficult to watch without getting a headache. Trying to reproduce the grainy quality found in many grindhouse films, the director instead cuts from one grain to another in a single shot or randomly includes qualities suggesting the film may be decomposing; but, instead of providing atmosphere and mood (or anything that resembles the dilapidated film stock quality found in Tarantino and Rodriguez’s Grindhouse films), it produces an unpleasant experience strenuous on the eyes. This is then followed by even more distracting transition cuts and a misplaced sound track. The director is able to keep the narrative moving forward even if it is clumsy at times and he manages to create some sense of tension toward the conclusion when the farmer and the policeman (late cast additions) face off while the zombies begin to overtake the farm land. To its credit, Dead Eyes Open ends on a positive note hinting a grander and more cohesive story.

It is difficult to recommend Dead Eyes Open to anyone except the most dedicated zombie film aficionado. At best, this film works as a curiosity, perhaps to be admired for the attempt made rather than the result achieved. The filmmakers have the passion and sincerity for making horror films and that love for horror films does make it onto the screen. But the budget and (unfortunately) the talent isn’t there to support it – at least, not yet. Any hopes of Dead Eyes Open being a watchable and enjoyable film, regardless of the effects and acting, is undermined by the choices made in the editing room with unwieldy cuts and transitions. Pass on this film and wait for the director to create a film where the production values match his passion. 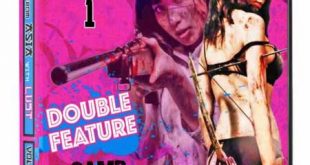