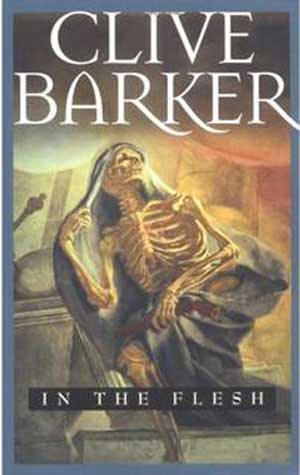 Hell-o, book maggots. This is a review for the man that Stephen King calls “better than he is now.” The quote is on the front cover. Of course, I can’t agree with the King, but Clive does kick some ass all the same. This review is for the anthology which spawned the story that spawned the film Candyman… In the Flesh.

He has been called “the new master of Horror” by many and is still going strong. Clive, himself does not want to be known as one persona in the field or industry. He is a writer of books and screenplays, a director (Hellraiser, Lord of Illusions and Nightbreed), a Producer (Candyman, Gods and Monsters among others), an actor (Stephen King’s Sleepwalkers) and an artist. His artwork can be found on his own books, on t-shirts and other outlets. The dude does everything.

In the Flesh is very well written. The stories which it includes are In The Flesh (also bearing the title), The Forbidden, The Madonna and Babel’s Children. I don’t know which version of the cover will be shown here (as there are now several), but the one I have is drawn by Clive himself. It is awesome. So, if you happen to get this version, it’s one hundred percent Clive, from the front… to the back cover.

This anthology is written for adults only as it tends to get pretty graphic, which of course is why I love it. His description of graphically executed detail does not hold back. In some cases (for me anyway) that is good. Other books of his let his sexuality seep out a little more (in which he is open about… and descriptive, such as The Hellbound Heart, which later became the film Hellraiser), but not in this particular anthology. It is page to page fright and a little bit of shock value thrown in for decency and good taste… hahaha.

The first story, In the Flesh, tells the tale of Cleveland Smith. A prisoner who’s cell mate reveals to him a sinister evil. The second urban tale (and of course, my personal favorite of the group), The Forbidden is about a woman, Helen Lyle, a student doing research of a town in New England’s street graffiti, which stumbles upon an urban legend. In The Madonna, in an abandoned steam bath, strangely beautiful women seduce two businessmen into a ritual of dark sexuality. In the concluding chapter/ story, Babel’s Children, wise men race frogs in a Greek asylum to decide the fate of the world. That is all of the information I will give you content wise. Check the book out and see for yourselves what a trip of dark, fantasy Horror this is.

Clive’s writing is different from others, including Stephen King’s, in a sense that it is peppered with poetically colored word schemes. While he stays brutally descriptive with the unfolding of his universe, Mr. Barker also spices metaphorically and poetic like words in the mix to make the darkness come out in a very colorful way. This unique way of writing has not been touched by most.

Since there is a film adaptation within these four stories, it is mandatory that I give you my stojry to screen adaptation review. This particular story is one you all should know (and love, damn it… Well, not so much the sequels)… The Forbidden. The film that this short story birthed was Candyman. In the comparison of the two, there are some major differences (even within the story’s plot and characters). In the story, Helen is studying (as mentioned above) the city’s graffiti. In the film, she was studying urban legends, and in a different town ( and country) all together… Chicago, Illinois. Spector Street was her main focal point in the story, while Caprini Green was the home main interest in the film. In the story, Candyman is a multitude of colors.

In the film, he is an African American (played by the awesome Tony Todd, of Final Destination and Murder-Set-Pieces). Bernadette is one of Trevor’s associates and in the film, she is Helen’s best friend, fellow student and project partner. Purcell is awesomely portrayed by the actor in the film. If you read the story, you can tell that the actor studied the characterization very well. They couldn’t have picked a better actor. He is just as stuck up as he is in the story (character wise, I mean). One thing is, Candyman only appears on two pages. One is the last, during the bonfire. The other is the part in the carport in the film. This is where all of Tony Todd’s dialog was pulled from the book. One page. Nevertheless, it makes for a good read and watch.

All in all, this book is not one to be missed if you’re a fan of fantasy Horror, or any kind of Horror for that matter. Especially if you’re a Clive Barker fan. He is one of the leading masters of modern Horror. I give him just as much praise as the next person, or fan… I can’t say he’s my favorite author (that would be the King), but he’s in the top three. By all means, check this out and any of his work that you can. His artwork is just as twisted. I give this anthology, In the Flesh, TWO EYES GOUGED (CHECK IT) OUT.

Tags Clive Barker In the Flesh