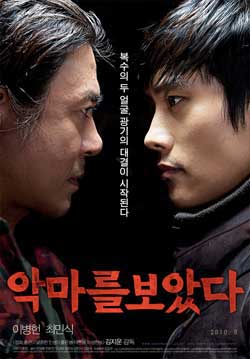 A secret agent tracks a serial killer who murdered his fiancée.

While we’ve seen our share of psycho-kills-for-the-fun-of-it films, “I Saw the Devil” actually is one of those stand out movies that might have you even questioning the morality of some of the content. In its gritty cold performances we meet up with secret agent Dae-hoon (Byung-hun Lee) who has just lost his fiance to a unknown perpetrator road killing. He is advised to take some time off but is adamant about seeking out his fiance’s killer based on the not so helpful evidence left behind at the murder scene. It really comes down to a subjected profiling based on similar crimes in the past. His father in law is on hand to aid in this profiling.

As Dae-hoon proceeds to track down and question each of the 4 suspects that match possible connections, he takes his perseverance to the next level by torturing each one in the process in search of the killer.

Ready to watch the trailer of “I Saw the Devil”?

We find out pretty quickly that his fiance was killed and tortured in the most horrific way for simply being in the wrong place at the wrong time. Though Dae-hoon turns out to be a pretty keen agent that tracks down his culprit right away. Kyung-chul (Min-sik Choi) who you also might remember from the “Old Boy” trilogies (also under thru helm of director Ji-woon Kim) is portrayed as 1 sick bastard. Why, and at what motivation is actually left to the way side leaving nothing but a profile of one sick individual who actually has been at this kind of thing for quite some while. What is disturbing as the film plays out is that it almost feels like his lifestyle knows no other way. He is a product of his actions…and his actions are all bad.

At this point, we are expecting some sort of killer to agent standoff, but its the filmmakers choices that make this movie quite unique. Dae-hoon locates his man with pretty minimal effort but also lets him know that he is not going to make it easy on him. In a rather bold move, he force feeds him a tracking device and lets him go after beating the living crap out of him. Kyung-chul who assumes he got lucky and was spared from execution picks up his damaged body and goes about his business. This business leads to more cold minded indulgences that seem to be just a part of his every day operandi, rape, murder, abductions and pretty consistent rudeness. What turns the tables here is that the agent continues to track him and arrive just long enough to keep Kyung-chul’s life miserable.

A constant revisiting of assault and torture layered with heavy violence only to leave him again as a reminder that there is no escape from his upcoming fate. We are told thru narrative that the “monster” risks infecting the “monster” with his same MO when the law continues on a path that is not unlike the one he is after. This idea is not entirely new, though the director take sit to the next level with visceral scenes of violence than go above and beyond the normal agent to killer relationship. It is thru this interaction and growth of the characters that we see a transformation take place. Brilliant!

Director Ji-woon Kim delivers on the type of film stylings that we have come to expect from him. Not only is this an impressive revenge film but it questions the idea of right and wrong and how far someone would go to make a point. The movie carries on for quite some time and really drive home the pain and suffering of mind, body and soul in our characters. Horror fans should make this a permanent part of there collection for its bold story and riveting performances.