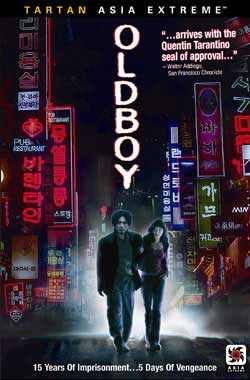 With no clue how he came to be imprisoned, drugged and tortured for 15 years — and no one to hold accountable for his suffering — a desperate businessman seeks revenge on his captors, relying on assistance from a friendly waitress. Korean director Chan Wook Park — a former philosophy student and Hitchcock devotee — uses his influences to create a mesmerizing psychological drama with a resolution that will leave you speechless.

Mucho thanks to Mikey for letting me review this movie! Every one knows about OLDBOY. Everyone knows how great it is and it’s a flick that busts out of it’s genre to become a film that is a truly must see for cinemaphiles across the globe. I remember being super impressed by the trailer and really looked forward to seeing it. So I rented and of course I really liked it but it was not as violent and bloody as some reviews led me to believe but it does have it’s lions share of brutal beat downs, merciless murders, and 86 different kinds of diabolical revenge schemes but it is not a gut ripping blood feast that some have painted it out to be.

And perhaps you have also heard that Quentin Tarantino got behind this film but OLDBOY is not like any Q.T. movie. I love Tarantino pics but it has very little in common with any of his movie. It does have a non linear way of telling it’s story and the fight scenes are just as brutal as anything in a Q.T. flick but if you are looking for the Korean PULP FICTION, well, you will still probably be immensely satisfied with OLDBOY but it is vastly different from the works of Quentin Tarantino. Also I can’t remember where I heard it from but I heard OLDBOY is based on a comic book and when I looked for info on the film on the imdb it confirmed that, yes, it is based on a comic. Please leave a comment though if you know more about the comic.

Back to the violence! There is a great fight scene where our hero Oh – Dae Su works his way down a corridor fighting off no less than ten adversaries. It’s not even that bloody but it is a tough scene and just when you think Oh – Dae Su is going down and going to suffer a GOODFELLAS style stomping he charges back up and kicks all their asses!

This scene really built up how tough Oh – Dae Su has become and his unbreakable will and solid determination in his quest for revenge. So it makes the beating he gets at the end of the movie kinda scary. He gets his ass handed to him by this little bleach blond Korean dude and this cat tosses Oh – Dae Su around like a stuffed animal and throws him impossibly far to slam into a plate glass window. It seemed like this guy had almost superhuman strength because Oh – Dae Su is so tough and this dude makes short work of him.

All this happens in the name of revenge. REVENGE! It’s another emotion we have all thirsted for at some time or another and it is one of the more damaging of feelings and actions to every party involved. Which OLDBOY illustrates so well. But amidst all this violence, blood, torture, and murder we are treated to the eating of a live octopus by Oh – Dae Su! It’s a surprising scene and in almost any other film it would be a muched talked about scene but of all the reviews I have read about OLDBOY I only saw it mentioned once. But it’s cool to see and reminds me of late 70’s early 80’s exploitation films that boasted of animal killings or bizarre human antics, particularly the cannibal movies. Then there is the primitive dental surgery by claw hammer and the tongue severing scene, both of which are not graphically shown but both are very intense and you get the idea!

Then there is the look of the film and the directors style of camera direction. One of the best descriptions I have heard for Chan – Wook Parks direction is that his films are shot with a diamond cutters eye and that description speaks volumes! Everything looks vibrant and fresh even the dirty scummy parts and his angles are so tight and centered. I listened to the commentary which was actually pretty boring but one surprising fact I learned was how much cgi went into the making of OLDBOY.

It was used almost exclusively to enhance the film and it succeeds instead of using it to shout out, HEY LOOK, WE’RE USING CGI!! Even when they pointed it out I couldn’t tell By now in most reviews I write I would comment on how this movie or that movie was good but could have used more violence, bloodletting, and gore but OLDBOY is so good that I will not make that complaint. It was great the first time and has actually gotten better with each subsequent viewing. That is because of the directors complete vision, the interesting and complex storyline and the fine performances given by each of the actors and the intense and emotional acting of the lead actor Min – sik Choi. I just saw it for the third time around and I felt even more sorrow, pity, and a desperation for Oh – Dae Su and the ordeals he had to endure. Yeah he takes his share of physical abuse but the beatings he takes are actually the least of the torment he goes through.

A few times in the film he is referred to as a monster, a animal and that is what he becomes through he course of the film and no matter how much vengeance he attains it is not worth what he had to go through to get it and his performance at the end is so filled with raw emotion and heartbreaking that I don’t think Choi – Min Sik was acting it seems like he pulled these feelings out of the core of his being and threw them across the screen for us to see and that’s way more special than any effect or gratuitous gore they could show.

And I love gore. The regular dvd has enough special features to satisfy but there is also a 3 disc Ultimate Collectors Edition. I don’t know what all is on it but I think it’s worth pulling out at least one tooth with a claw hammer to obtain it.

But any version you get has all the power you need to enjoy this fantastic film. Before I forget, the beginning is actually kinda funny because of the way Oh – Dae Su is acting in the police station and there are a few other sparse moments of levity thanks to Oh – Dae Su. Choi – min Sik is such a good actor and you really feel for him by the end of this film. So it’s definitely worth adding to your collection no matter what genre of film you enjoy. 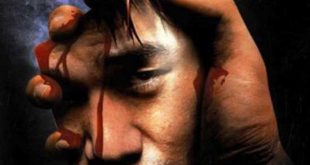