Top 10 Horror Films Which Benefit from the Existence of Religion

Well, the title’s pretty simple and self-explanatory this time around, no? Again, these won’t necessarily be the BEST of this example, but the ten movies included here are going to be such that they benefit greatly from the existence of the concept of religion.

God or Allah, Buddha or the trees, or even Satan himself all have a part to play in these flicks, and are the driving force behind what makes them great. In an age where people are more “spiritual” than “religious,” these are movies that hold up, are still scary or entertaining at the very least. They’re the ones I go back to again and again, and some of them might even have the power to shape a belief or two.

Or not. Either way, they’re pretty good flicks. Let’s go!

1- The Sentinel (1977)
This 1977 flick, featuring everyone from Ava Gardner to Christopher Walken, could initially be dismissed as a rip-off of Rosemary’s Baby, but doing that to this flick does both movies such a disservice. Rosemary’s Baby works as a tense drama of sorts, not really all that scary as it is a ponderous movie. The Sentinel, on the other hand, is off the rails with Scary, Nasty, a bunch of demonic dead stuff, and the gateway to Hell. Of course, it’s in New York City. It often feels like an American version of a Fulci flick, which basically means it’s less gory but makes sense. No knock to Fulci with that, but sometimes I do like a cohesive narrative, and I knew what the Hell was going on by the end of The Sentinel. Occasionally, I like that in a horror movie, and the otherwise by-the-numbers plot is done a great service by this, decent effects and great actors throughout the entirety of the movie. 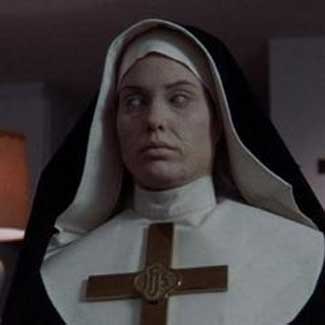 2- The Convent (2000)
This is definitely a sentimental favorite of mine, a movie that I’d like to include in every list I ever write, whether it fits the bill or not. It’s not the best movie, but it’s so much fun, has Adrienne Barbeau kicking ass, makes its comedic characters also somehow relatable, and has black-light blood. It’s perfectly teetering on the edge between horror and comedy, just enough scary to balance the wild-eyed comedic glee with which it was obviously made. Also: demon nuns. It may not fit on other lists, but it definitely fits here! 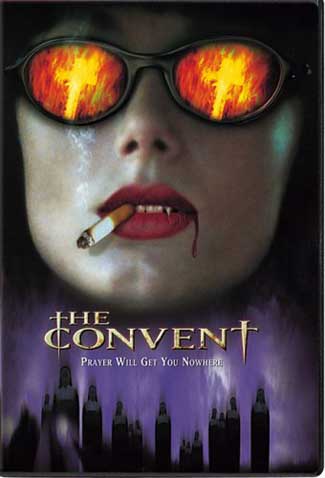 3- The Night of the Hunter (1995)
Now here’s a bona fide classic! This 1955 Robert Mitchum vehicle is haunting, moving along at a seductively evil crawl that lulls the viewer in from Frame One. The premise is simple, that of a man who twists the word of God to justify the evil he wishes to do, and Mitchum makes for one of the most imposing villains I’ve ever seen in a horror film, as he spends the duration sniffing out the money and eyeing his next prey. It’s essential horror viewing, and essential religious horror viewing. Demons or not, Catholic conspiracies or not, our preacher in The Night of the Hunter is probably the most venomous religious villain out there, including Satan himself. That’s definitely saying something. 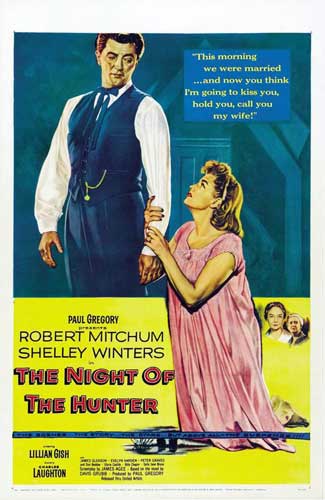 4- Warlock (1989)
Julian Sands. Julian Sands Julian Sands Julian Sands! He’s so much fun to watch in this movie as he dukes it out over the centuries with Richard E. Grant over the Grand Grimoire, generally being wildly evil while trying his damnedest to undo all of creation. He’s drinking the fat of kids who weren’t baptized, making Lori Singer old by stealing her earrings and generally being a metrosexual super-creep, and the simple story of evil forces being able to undo the work of the Christian God is played perfectly in this film. It’s fun, scary in bits, well-paced and very rewarding. It’s a classic Hollywood religious horror flick, and if the studios would just stick to the formula used to make this movie, we’d all be doing just fine! 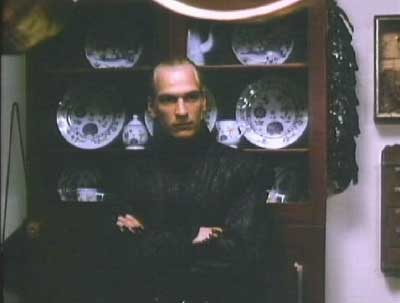 5- Thirst (2009)
Chan-wook Park blended a number of religious elements with this amazing vampire flick, and the world is better for it. Firstly, we have the vampire flick, and a vampire is essentially an affront to the very idea of God. A vampire is a creature who forsakes God for immortality, for power. And then, in Thirst, our vampire is a priest. And he’s breaking his vows in a number of ways! Add what I perceive as flawless, sensitive acting and a script that is adept at juggling fear, drama, lust, and horror, and find yourself with one of the best religious movies ever…in any genre…and it only came out in 2009! 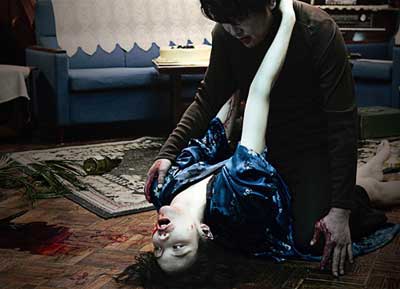 6- The Exorcist III (1990)
Everyone knows that the first in this series is the benchmark for religious horror, but I choose this one for the list because it has the best kill in all of horror films. Bar none. George C. Scott’s final philosophical showdown with the alternating Gemini Killer/Father Dyer is very forceful, too, which only adds to the heavy religious tone this movie has. People may not believe anymore; they may giggle at religious flicks. But this one’s scary all on its own, and the religion is a magnificent cherry on top. 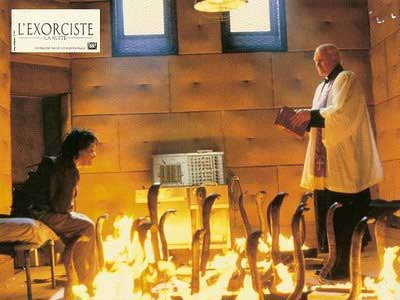 7- The Beyond (1981)
Okay, remember that stuff before about Fulci flicks? Well, here’s his spot on the list, and it’s so deserved! Similar to the aforementioned The Sentinel, this movie is completely nuts. I’ve probably seen it a dozen times, and I still don’t have a f*cking clue as to what’s going on in that movie, except that all Hell is literally breaking loose, and chaos is abounding. It’s great. It doesn’t make any sense, but it’s religious in tone…and maybe Hell doesn’t make sense. If it doesn’t, I guarantee that Hell is being a character in a Lucio Fulci film. 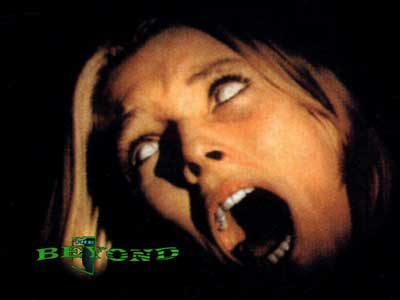 8- Hellraiser II: Hellbound (1988)
In this scenario, I simply had to choose which Hellraiser movie I was going to include. Three of them had merit: the first, for being the first, Inferno, for being inventive and a really pleasant surprise of a horror flick, and Hellbound. Part 2 won out, primarily because the unrated version of this movie is nearly disgusting, the idea of Hell and its intricacies has never been more thoughtfully detailed, and every character in the film faces Hell, from Kirsty to Dr. Channard to Pinhead himself. Everyone gets a taste of the poison that is an afterlife of perennial religious torture, and that exploration is what makes this movie the choice, if a person had to choose just one Hellraiser movie to put on a list about religious horror. 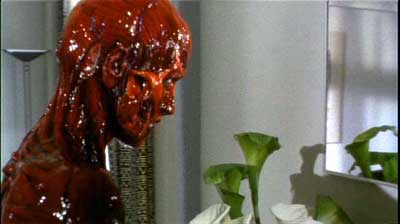 9- The Craft (1996)
This is another sentimental favorite for me, and was my first introduction to the concept of Wicca, however misinformed it was. The Craft dealt with something new in filmic religion, something most people don’t get to see. For once, it wasn’t just God vs. Satan. It wasn’t The Omen or The Prophecy (though I do love both films); it was fresh, enlightening and relatively self-aware. It wasn’t accurate about Wicca, but it gave that belief system a voice, and I really enjoyed that someone in Hollywood thought it would be cool to give a douche like myself an insight into something besides the everyday. It’s a well-acted movie, well-written and feels honest to a point, no matter its faults. Mix all of that, and one is left with a pretty damned good religious flick that didn’t talk down to its audience, like so many movies of the 90s did. It assumed that we knew, whether we did or not, and assuming a level of moderate intelligence is rare in horror flicks. Hence, this is my #2. 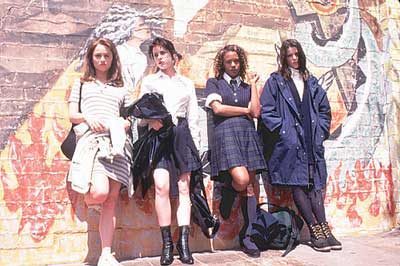 10- The Passion of the Christ (2004)
I’m not even trying to be ironic or cute with this. The Passion of the Christ is pretty much a snuff film, on par with pseudo-snuff like The Last House on the Left, but with Jesus. An intensely violent film, we’re treated to the torture and murder of a man, God or not, that gets so horribly intimate that it’s almost entirely uncomfortable. If I had to compare it to another movie, honestly, Martyrs would be its peer. Both films are violently exploitative and mean, and both are filmed with a sick grace that makes them nearly unwatchable. Fantastic…amazing…but unwatchable. It is truly the ultimate religious horror movie, a snuff flick on par with the worst things I’ve ever seen online. The only difference is that those online videos are just moments of reality; The Passion of the Christ was carefully crafted and manipulated to be as horrific as possible. No matter Mr. Gibson’s intentions, he ultimately made one of the most graphic, harrowing horror films of all time. 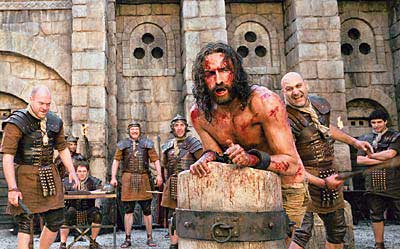