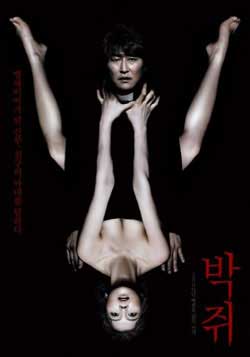 Sang-hyun, a priest working for a hospital, selflessly volunteers for a secret vaccine development project intended to eradicate a deadly virus. However, the virus eventually takes over the priest. He nearly dies, but makes a miraculous recovery by an accidental transfusion of vampire blood. He realizes his sole reason for living: the pleasures of the flesh.

Chan-Wook Oark is one of the top Asian directors of all time and I put him along side John Woo and Akira Kurosawa. And I know it’s not right to limit him to just Asia but he’s not a Scorsese or Kubrick. Not yet. And if you still have not seen OLDBOY and you are a genre film fan than you should be confined to a HorrorNews.net isolation cube and subjected to a triple feature of KAZAAM, SEX AND THE CITY, and EVITA until you learn the error of your ways! SYMPATHY FOR MR. VENGEANCE and LADY VENGEANCE are almost as good but you should also check out the short film he did for the 3 EXTREMES anthology, it’s really good and also deals with the theme of revenge. Which brings us to his latest film, THIRST, horrible title by the way, and I was not expecting him to do a vampire film. I thought he would do almost anything else but a vampire movie. I talked to other fans who said it sucked and I kind of believed them. I mean, he made three great films in a row so it seemed like he might fart out a clunker with his fourth full length feature.

It begins like some of his other films, slowly, nondescriptly, and very ordinary and then he slowly twists and tightens his tale until it snaps and explodes. Father Sang Hyun is a well liked priest that administers to people in a hospital and he undergoes a a blood virus experiment for reasons I still don’t fully comprehend and it kills him but he comes back as a vampire. But not a pale, fanged, pointy eared ugly vampire but the sun does burn him a little and he has to wear bandages but as the film progresses the suns rays do become deadlier to him.

One day a lady begs him to pray for her hospitalized son who has cancer and when Sang Hyun enters the hospital room they recognize each other from when they were children. Turns out his friend,Kang Woo, doesn’t really have cancer and is something of a hypochondriac but he invites Father Hyun over to the house he lives in with his mother and wife, Jae-tu, to play mahjong with him and some friends. Father Hyun notices how they treat Jae-tu kinda bad and you see a relationship strike up between them.

And while this is going on he is drinking the blood from people at the hospital but he does not kill them. He’ll leach off comatose people and even a friend who is a older priest. Soon he does have sex with Jae-tu and she gives him blood as well. Eventually Jae-tu wants Hyun to kill her husband, Kang Woo, so they can be together. He does it and after Kang Woos mother falls into a catatonic state from the grief of losing her son Hyun and Jae-tu shack up together and take care of dear old mom. Soon enough though Jae-tu begins to feel the guilt for convincing Hyun to kill her hubby. In a big argument he ends up killing Jae-tu and brings her back as a vamp. Now this is where it gets good!

I figured THIRST had to be a good movie. Chan Wook-Park is a true talent and even though I heard it sucked I knew I had to watch it for myself and thank our lord in hell that HorrorNews.net sent it to me for a review. Thanks Mike! THIRST does move slowly for the first hour and I wasn’t sure where it was going to go but it slowly turned into a real vampire movie, but you still never see any fangs, they don’t have super pale skin, they don’t shape shift or have weird eyes but they do have superhuman strength and they leap around like Spider-Man and they do have that savage bloodthirsty nature that you expect a vampire to have and that the majority of us keep in check. And I can’t forget to mention the whole religious aspect or actually the blasphemy of having a bloodsucking creature of the night decked out in a priests holy vestments.

I always thought vampires were disciples of satan and it’s pretty cool to see a vampire as a man of the cloth and he even renounces his christ like ways. I don’t want to ruin it for you but after Jae-tu becomes a vamp she does not have a problem killing people. Before she became a bloodsucker she was timid and shy but you could sense a anger in her and after she turns and gets some power she wields it without mercy and this is where the major conflict between her and Hyun comes from for the movie.

Plus she is just so so looking but after awhile I started realizing, ” Man, this Jae-tu ho’ is pretty hot! And the parts of them jumping and leaping around and using their strength are really cool and effective and even though you’ve seen it before in other superhero and vampire movies the way Chan-wook Park does it is really neato and a little different. He shows it in a matter of fact and realistic way and I can’t really tell when it’s wirework or cg. He really needs to come to the U.S. and make a sci-fi or superhero flick, or action movie or finally do a balls to the wall horror movie! I can totally see him doing a remake of ROBOCOP or a John Woo movie. Imagine a remake of the KILLER in his hands. Or something like PANDORUM, ALIENS, or PREDATOR! Hell, almost any kind of movie under his control would be good. A western, a war flick, even a James Bond movie. He seems to always write what he directs but I’m sure he could work with someone else’s script, he’s that talented!

I don’t want to reveal more and ruin it for you….but I do! Okay I will reveal one little tidbit that really doesn’t completely destroy your enjoyment of the movie. There is a minor character named Evelynn. She is married to one of Kang Woos friends, she is Filippino, she is kinda cute and I did not want to see anything bad happen to her and all I will say is that Evelynn does not get killed! So happy for this!
If you are all ready a fan of Parks work you will like it and if you are a big vampire movie fan I urge you to give it a look. Also alot of people who like THIRST mention LET THE RIGHT ONE IN in the same breath when they mention good vampire movies and I had no intention of seeing LET THE RIGHT ONE IN but if it is as good as THIRST I might investigate it.

And Parks style of film making has only improved. The way he frames a scene and the lighting and just the overall feel of his films are clean, tight, but still dark and exciting and new, like anything can happen. I mentioned he is not at the level of Scorsese or Kubrick but these are two of the directors he reminds me of. I think this is the first vampire movie that I have ever seen that has whales in it! It has it’s humorous moments as well and this is one Korean vampire flick that you can obtain at your local video store.

So after viewing the horrible SUICIDE SONG, THIRST was a real treat! It started off slow but it picked up and it is a movie worth re-visiting and you will more than likely notice something you didn’t catch before and it is definitely worth purchasing and adding to you Chan-wook Park film collection. While it may not have the full on gore I crave and desire it is dark, bloody, and violent and I wholeheartedly recommend you see it. It’s not a spooky, haunted house jump scare horror movie which bothers me a bit but it is undeniable that Chan-wook Park is s film maker that is on his way to joining the ranks of the master film makers of our time. And I am not bullsh*tting you. 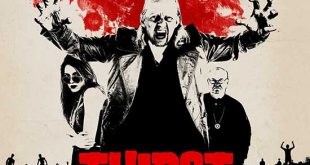 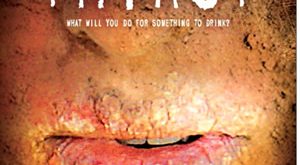