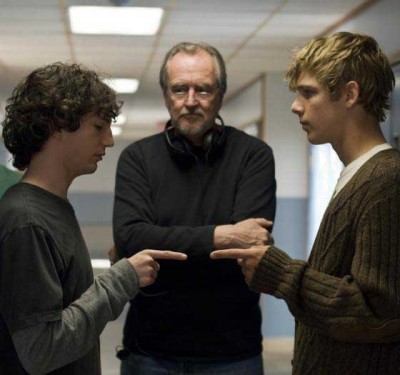 Horror fans are spoiled when it comes to film franchises. When you can’t get enough of a certain villain or storyline, you don’t have to fret because there are most likely four to six sequels that follow. Have a passion for Michael Myers? No problem, just watch any of the eight sequels. Also, let’s not forget the two new Rob Zombie versions. The same goes for a lot of the horror films we have watched over the years. It seems sequels are almost a thing of the past as the new trend is now in remaking the originals. This is not a bad idea at all because, no matter what we may personally think of the remake, we are still quite excited to see it. More important to remember though is the mastermind behind the “original” films you love. The ever quintessential “Masters of Horror.” What would happen if they ever decided to retire and stop creating? Now that is a scary thought indeed.

Not too long ago, Director John Carpenter took what he called a “much needed break from film making.” Much to our relief though, he has since returned back to the set after nine years with his newest project, The Ward. Most recently though, there is another iconic Master of Horror who is pondering the same fate of retiring, Wes Craven. Yes our dear, beloved Wes Craven recently revealed in a New York Times article that he is thinking of saying goodbye to film forever.

Yes, even though Scream 4 is set to debut next April, and is already gaining a widespread, frenzied interest, Wes is reportedly upset about his most recent film, My Soul to Take. He explained his feelings regarding the “flop” of this film, “I have a film out that I poured my heart and soul into for four years and it’s doing poorly. It’s had horrible reviews, I feel lanced and torn apart and scared I’ll never work again.” The creator of Nightmare on Elm Street, never work again? Not possible. It is disheartening to hear Wes speak like this. Sometimes we take for granted how much work goes into an actual film, especially when it comes from such a well-known and well loved filmmaker.
I am no film critic, but I do know horror and I can assure you, that when previews of My Soul to Take first started airing, I had no interest in seeing it at all. I knew it was a Wes Craven film, but there was something about the trailer that made the film seem like a “cheap, horror knock-off.” But I have to admit, that once I actually saw the film, I immediately loved it. It was different and it had much more depth to it than the trailer let on. I know this film is getting bad reviews, but honestly, it’s a classic before it’s time.

Wes goes on to share how he really feels about being titled a “Master of Horror.” He compared himself to other horror filmmakers, “There are tons of guys out there doing great stuff. I kind of feel like a cat on a hot tin roof, I don’t know how long I can last. I get very nervous when people introduce me as the ‘master of horror,’ I don’t feel worthy of that whatsoever.” It’s so strange for us to hear someone we admire speak this way about himself. To every horror fan, Wes is considered somewhat of a legend. A legend in his own time for sure. Wes summed up his future by stating, “I’ve gone 40 years, I was thinking of doing one more decade, but maybe I’ll retire, I can’t tell.” Of course we don’t expect any of our idolized filmmakers to make horror films forever, but we do take for granted that, to this day they’re still putting out new material for all of us to enjoy. A feat that is no doubt filled with ups and downs in the film industry.

So, if Wes decides that maybe he will walk away from film making for a while, then we should take comfort in the fact that history repeats itself, and that he will most likely reappear when he is inspired again. It did take ten years after all for another sequel of the Scream franchise to be made. It’s only right that we continue to support horror films and not take for granted that such works of art will always be around. Don’t leave Wes….don’t leave!