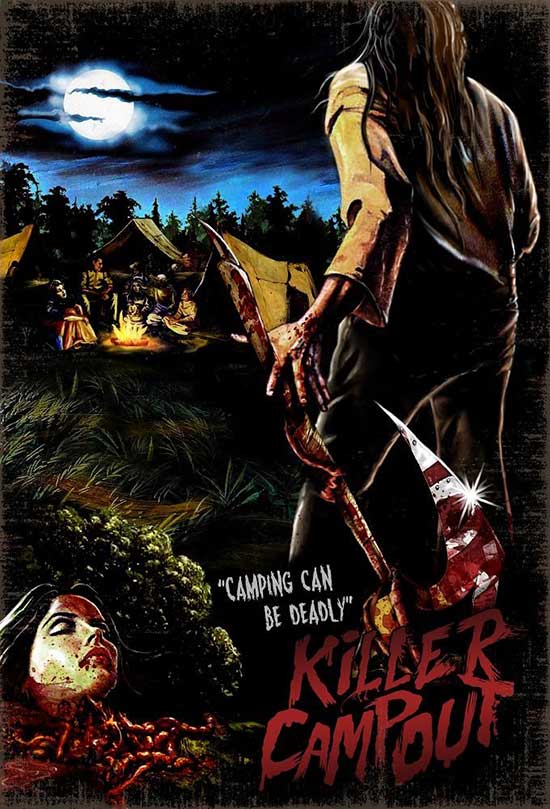 A pair of counselors take a group of troubled youths out into the forest for some much-needed therapy only to run afoul of a demented killer who loves slaughtering and eating his victims.

As most of you know by now I am a slasher flick fanatic. I am especially fond of the ones that were released in the 80s so when I heard that the extremely talented Brad Twigg was doing an 80s throwback slasher flick I was excited as hell as I have thoroughly enjoyed his other films. I went into it with mighty high expectations and let me just say that I was totally blown away by Killer Campout in every possible way and it doesn’t disappoint in the least. It is fun, gory, well written and directed, and is loaded with a great cast and some very likeable characters that you can’t help but root for. Killer Campout is an awesome little flick and I am extremely glad that I got to check it out as it is in the running for the best horror movie I have seen this year. 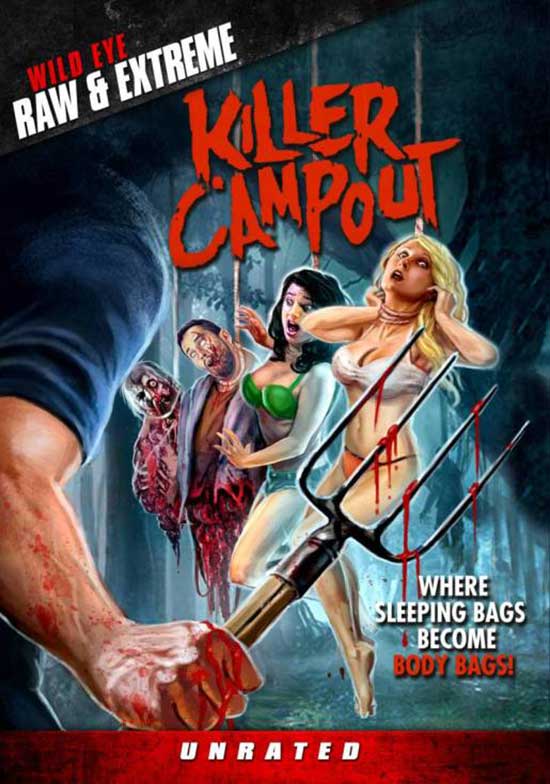 There are so many things to like about this movie that I’m not sure where to begin so let’s look at the premise first off. It has a simple premise but that’s OK because it works on many levels. We have two counselors that take some young people (who all suffer from a variety of problems including anger issues to cutting) out into the woods for a different type of therapy. Unfortunately for them, there is a weirdo stalking the very area that likes nothing better than chopping people up and then eating them. Needless to say, our heroes find themselves in his sights and the biggest majority of them die in some bloody and creative ways. I thought that the entire film felt like one of the old slasher films I grew up on back in the day (such as Just Before Dawn, Don’t Go in the Woods, and The Prey just to name a few) and it is obvious that Twigg gets it. Unlike a lot of other people who have attempted to make an 80’s throwback slasher in recent years Twigg succeeds in capturing the tone of those movies and the results are nothing short of amazing. The whole time I was watching it I felt like I had been transported back to 1988 or 1989 and in a nutshell that is one of the main reasons that I dug Killer Campout so much. 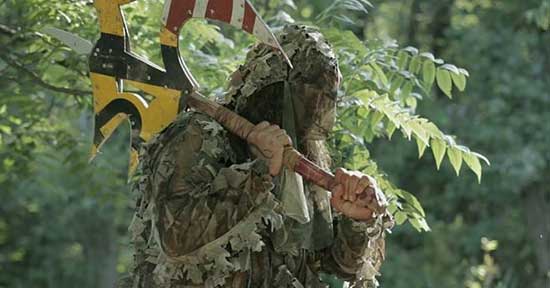 Did I mention that Killer Campout has one hell of a body count and has some awesomely fun, unique death scenes? The killer that appears in the movie is a creative guy and as a result we get some insane death scenes that look great. I don’t want to give everything away but just to give you an idea we get a scalping, an arrow to the eyeball, plenty of slit throats and stabbings, and my personal favorite which involves one poor guy getting cut in half (slowly and quite painfully) from the waist down. The deaths are all fun and they look amazing as the special effects are all top notch. The film only uses practical effects and they look 1,000 times better than any crappy CGI effects that most movies use these days. If you are a gore hound like me who loves some nice, brutal, gory death scenes then you are in for a real treat here. 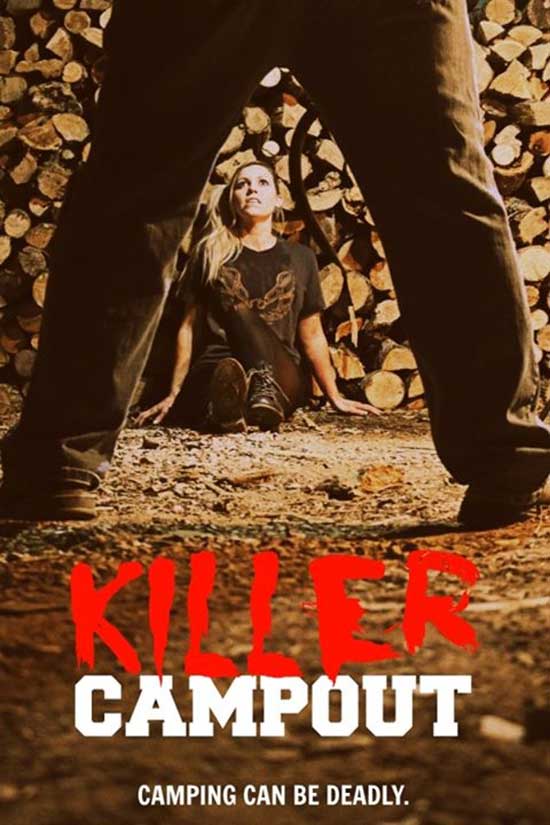 I also loved the cast and thought that everyone did an excellent job (I think it rules that horror legend Herschell Gordon Lewis does the opening voiceover and loved the fact that John Russo plays one of the characters). The cast is extremely talented, and they all did a wonderful job of bringing their characters to life. While I thought Julio Bana Fernandez and Luba Hansen were awesome (as usual) as the main characters John and Laura everyone else also does a great job as well. I dug every character, but my personal favorite had to be Roger Yawson as Chad. Chad is such an unlikable guy with a chip on his shoulder and a bad attitude in general, but I personally loved him and thought that he was loads of fun. You can tell that Yawson had a blast playing the part and he really knocks it out of the park every time that he is in screen. Alex Neumeier, Gary Lee Vincent, and Rosanna Nelson (who all have appeared in many of Twigg’s other movies) are all great as usual as well and I always look forward to seeing them as they are all very talented (though I do wish Nelson had gotten a little more screen time this time around). If you ask me one of the most important elements that makes a movie great is that you must have a talented cast of actors and likeable characters, and Killer Campout has both in spades. 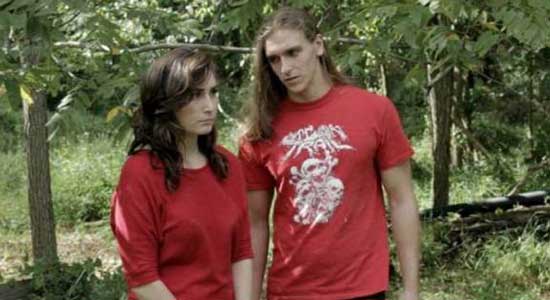 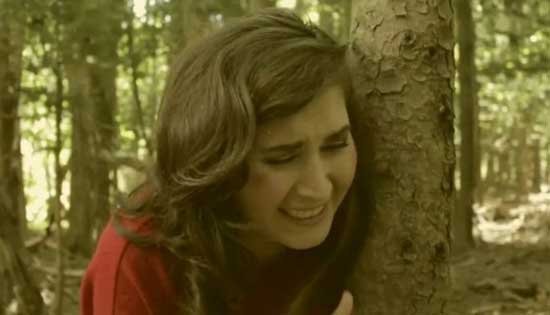 I dug the little twist that takes place toward the end of the film as well and didn’t see it coming. I don’t want to spoil anything for anyone but let’s just say that something happens later in the movie that will take most viewers by surprise. Unlike most twists in most horror films these days it doesn’t feel forced and is just cool as hell in general. I thought that it was a nice touch and while I may have suspected it a little bit I still thought that it was a great idea and I have a feeling that a lot of other viewers will feel the same way. 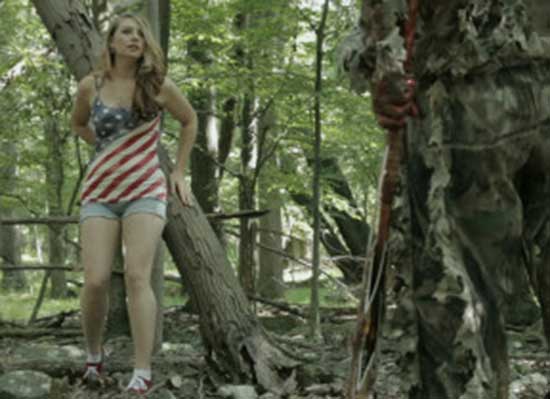 Killer Campout kicks all sorts of butt and I loved every minute of it. It has a little bit of something for everyone and if you are a die-hard slasher nut like I am then you will definitely enjoy it as much as I did. I can really see this movie gaining one hell of a following in the coming months and am really hoping that Twigg does us all a favor and gives us a sequel soon. If you are a fan of slasher films (or just great horror movies in general) do yourself a huge favor and stop what you are doing right now and go check this movie out. You won’t be let down. Highly recommended! 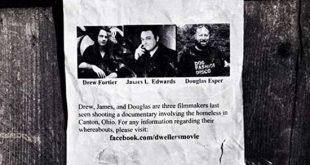