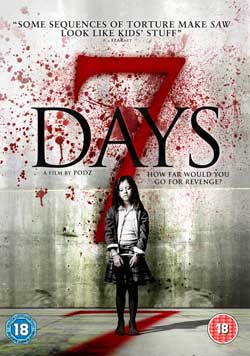 When his young daughter is raped and murdered, Dr Hamel decides to take matters into his own hands. Not satisfied with the fact that the man responsible will be going to prison the good normally level-headed, mild-mannered doctor abducts him and takes him to an empty cottage in the middle of the woods. He then goes about torturing the man in a variety of ways, telling the police that he will kill his prisoner and give himself up in seven days (which would have been his daughter’s birthday), Will he follow up on his threat or will he come to his senses before he commits murder?

Normally I wouldn’t have given “7 Days” a second glance if I ran across it in a video store (remember those? They are all dying out, sadly), since it really isn’t a horror film (my wife says that I am a snob when it comes to movies but I disagree; I just know what I like), but I am glad that I got a chance to check it out. It is dark, brooding, depressing, and thought-provoking all at the same time. I really enjoyed this film and I think that many viewers will as well. It has a nice “Dexter” feel to it (and I love “Dexter”), but I think that Dr. Hamel may be just a bit more hard core than even Dexter. Then again, you can’t say that his victim doesn’t get what he deserves (and then some) considering what he has done.

Does Dr. Hamel do the right thing by doing what he does? I certainly think so, but some people may disagree (even most of the cops in the movie secretly believe that he is in the right for his actions, as does most of the general public). I think that if I were in his shoes I would do the exact same thing to be quite honest. If someone you loved (or in my personal opinion a pet that you loved) was a victim of something like this do you think that having the person who did it just serving time in prison would be enough? I personally don’t think so, and as a result I can totally understand why Dr. Hamel does all the things that he does.

The gore in this movie really isn’t that over the top but there was enough of it to keep me happy. We are treated to such things as a knee cap being broken with a sledgehammer, a brutal beating with a chain, and a hard core operation scene (which makes sense as Hamel is a doctor after all) where an important body part is removed from the victim (while he is awake, of course). “7 Days” is by no means one blood drenched scene after the other, but the gore we get is pretty realistic and brutal, so the people like me who love blood and guts won’t walk away unhappy.

I also liked most of the characters and thought that the actors portraying them did an excellent job. Claude Legault was very effective and believable as the grieving and vengeance-seeking Dr. Hamel, and you really feel for him as he is a nice, normal person in the beginning who is pushed to his breaking point due to the loss of his daughter. Remy Girard is also top-notch as the sympathetic detective who is obsessed with his murdered wife (he watches the security footage of her being killed over and over again-she was killed during a store robbery –and keeps their bedroom boarded up). It is obvious that he agrees with Hamel’s actions but is torn due to the fact that he is a cop and what the doctor is doing is against the law. 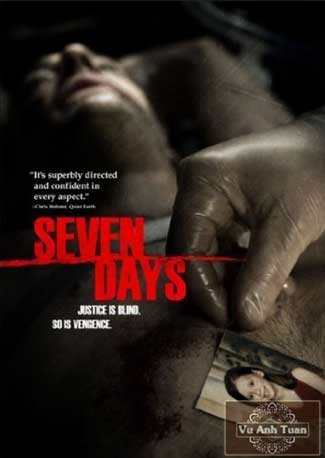 “7 Days” is very good and other than the fact that it is a little too long there is nothing really negative that I can say about it. It packs a powerful punch and stays with you several days after you finish watching it, which is what a good movie does in my opinion. It isn’t a happy, easy-going family film and I think that some people will be very bothered by some of the things that take place. Some viewers may also not like how it ends so abruptly but I thought that the final scene was nothing short of perfect. I really liked “7 Days” and think that if given a chance that most other viewers will too. Give it a shot if you come across it.